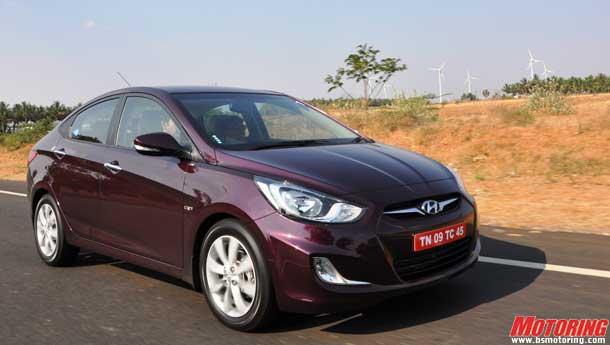 I want to upgrade to a sedan from a Tata Indica Vista. I am considering the new Hyundai Verna and the VolksWagen Vento. I was also interested in the Vento diesel but I read that the 1.6 motor is noisy. I verified this myself on a test drive. The fit and finish is great and the driveability is excellent but the engine noise levels were a bit of a let down. However, the latest reviews are all praise for the Verna’s 1.6 diesel motor. What do you have to say about either engine and which car do you think I should go in for?

The Volkswagen Vento’s engine noise levels have nothing to do with technology, rather it's inherent because of the engine design as well as overall NVH suppression within the cabin. But yes, it’s true that the Hyundai Verna has a more efficient, refined and powerful engine. It’s also better loaded and has good in-city driveability and is softer riding in urban conditions. If that’s your priority in a car, then go for the Verna, though if you want to have the car that's a bit more fun to drive, then the Volkswagen Vento it is for you.

I own a Swift VDI which has clocked 120,000 km in less than four years. I am now considering buying either the Volkswagen W Polo or Hyundai i20 diesel. With respect to the Polo: will the 3-cylinder engine affect performance and overall life of the engine? Also, climate control and stereo are not offered in the Trendline and Comfortline variants, whereas the i20 comes with both in Magna trim. Can something be done about this? Is it true the 1.2 TDi is noisy and sluggish at low speeds? I’ve also been told that the Polo has very high service costs. And what should I expect in terms of resale value? For the i20, I’d like to know how effective the i20’s air con is. And is the i20 a heavy drinker? Are there any rattles at high speeds and does the car feel planted at speeds in excess of 110 kph?

The Polo’s 3-cylinder engine isn’t a less-engineered unit or one built with any deficiencies. Three-cylinder engines are designed to be efficient and less polluting, which the Polo 1.2 TDI is, but are inherently noisy too.The lack of climate control and stereo is a matter of convenience. If you want them, then you must look elsewhere. Also, in terms of increased cost of maintenance, you must also note that service intervals are longer than usual, so the cost per kilometre of maintenance is more or less in the league of other makes. Resale value is hard to predict for a car that has been in the market for just over a year, but we think that the i20 may hold value better in the long-run.

The i20 diesel has a more powerful motor, is more refined and is very efficient. In fact it can consistently deliver 14-15 kmpl in most urban conditions and up to 20-22 kmpl on the highway. AC is effective, the overall build quality is quite good and it’s more spacious too. The i20 is designed for ride comfort, so its suspension is on the softer side. At high speeds, the car tends to float around a bit, but it’s a trade-off that one has to live with. On the whole, we’d recommend the i20 diesel.

I am considering buying the Hyundai Santa Fe and I quite like the way it looks. However, it is a little strange that Hyundai is not giving the car for test drives. Also, I’ve hardly seen any Santa Fe on the roads even though it’s been months since it was launched. Is all well with the Santa Fe’s production or should I be worried ?

The non-availability of the Hyundai Santa Fe for drives has more to do with the fact that they are pretty much sold out and they are resorting to not keeping test cars at most dealerships for this very reason. Hyundai have grossly underestimated demand for the Santa Fe and are trying to catch up. There is nothing wrong with the vehicle, nor do we believe that it has the makings of a disaster like the Tuscon. What they need to do is ramp up sales, reduce the delivery period and maybe consider assembling the vehicle here.