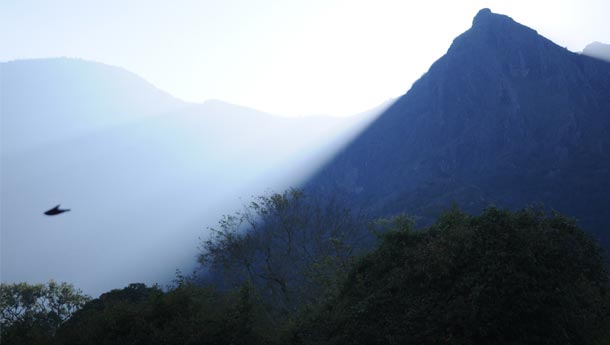 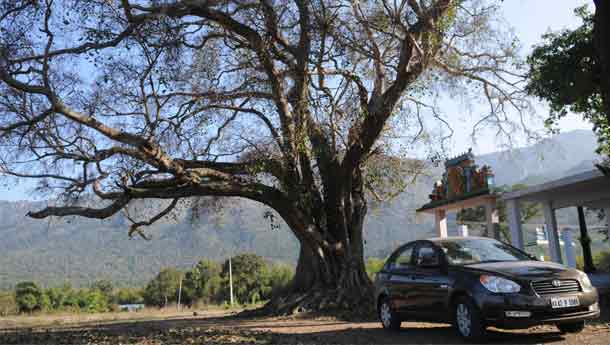 I don’t normally drive at night when I’m out on the road, mainly for reasons of safety (our roads can be hair-raising enough in broad daylight), but on this particular occasion I had had to make an exception. I was heading to the Mudumalai wildlife sanctuary from Bangalore and since my departure had been delayed, I found myself negotiating the forests of Bandipur (contiguous with Mudumalai in Tamil Nadu, but over the border in Karnataka) well after sundown. I was thoroughly enjoying the drive, though. The road through the jungle was absolutely fabulous – superbly surfaced and winding, allowing for some driving fun. Traffic was light, with the occasional bus and jeep trundling towards Mysore or the Kerala border, and oncoming traffic (for once) looked good – the way the headlights pierced the darkness, playing out over the road ahead, was surreal. The trees on either side formed looming, ominous masses, shielding the mysteries of the jungle from those on the road; it was easy to imagine hundreds of pairs of glinting eyes keenly looking at us. To be honest, it was quite eerie out there; there was a touch of the unknown to the beauty of the jungle. Just as an experiment, I pulled over for a moment (against the rules, I confess), switched off my headlights and lowered the windows slightly. It was too much to handle; the inky darkness, combined with the myriad noises of the jungle, caused a strange sensation in my stomach – I had to switch the lights back on in a hurry and drive off.

It was soon after this, as I descended a crest into a right-hander, that I saw a spotted shape flash across my lights. My mind, conditioned by years of evasive highway manoeuvres, immediately said ‘Dog’, even though I knew instantly that it was a leopard. The magnificent animal, a young male from the looks of it, froze in its tracks and stared at me, as I braked as gently as I could. My mind was still saying ‘Dog’ as I gaped at it, all rippling sinew and muscle and shiny coat, its eyes flashing fire in the lights. I suddenly began to feel light-headed, and I realised I had actually been holding my breath from the moment it appeared – there’s something about seeing a big cat that does this to you. The leopard loped over towards a ditch adjoining the start of the tree line, never taking its eyes off me, and I backed the car up slowly in order to direct my lights toward it. To my surprise and utter delight, the sleek animal didn’t make a run for it – instead, for the next five-odd minutes, it stood in full view and virtually put on a show for me. It cocked its tail and jinked this way and that; it turned around in circles a few times; it took a few paces towards the trees and then retraced its steps; it sat down and stared at me. Eventually, however, it ambled back across the road and melted into the darkness of the jungle, leaving me totally exhilarated, nerves abuzz. This had been my longest sighting of a big cat by far, and a night sighting somehow made it even more special. The only regret I had was not taking a photograph; I had been so mesmerised that the thought hadn’t even occurred to me. Nevertheless, by the time I made it to Jungle Retreat (my digs for the next couple of days), I was feeling thankful for the concept of serendipity.

The truth is, I had decided to go to Mudumalai not so much to do the whole ‘wildlife’ thing, but to bring in the new year in a relaxed, off-the-beaten-track way. The last few occasions have inevitably been city-based, with the usual party-on-the terrace /biryani//plentiful beverages theme – not that there’s anything wrong with this, you understand. It’s just that the urge to be someplace else and do something different becomes quite strong, after a point; I simply wanted to be far removed from the madding crowds. Mudumalai was a place I was familiar with – back when I was a mere stripling in boarding school, we used to go there on treks – but I’ve always wanted to go back and spend some quality time there. Mind you, it’s the sort of place that anyone with even a passing interest in nature should go to. It’s part of the Nilgiri Biosphere Reserve, which spreads across the Western Ghats and Nilgiri hills in Karnataka, Tamil Nadu and Kerala – that’s over five and a half thousand square kilometers of dry and wet deciduous and montane rain forest, with habitat ranging from scrub and thorn forest to high-elevation Shola forest. I can certainly vouch for the thorny bit – I remember being almost torn to shreds on one particular trek. Mudumalai itself is in the extreme south-west region of Tamil Nadu, bordering Karnataka and Kerala, and became southern India’s first sanctuary in 1940. It was only 60 square km at that stage, but it’s grown to 321 square km today, and the UNESCO World Heritage Committee is considering it for World Heritage Site status. Got your binoculars out? Mudumalai’s teeming with wildlife; carnivores include tiger, leopard, sloth bear, wild dog, jackal and striped hyena. You’re also likely to spot elephant, wild boar, spotted deer, bison and sambar deer, plus a rich variety of birds, primates and reptiles. However, as I explained earlier, I wasn’t there to don the old trekking clogs, smear on the insect-repellent and go tramping off into the undergrowth; there’s a time and a place for that sort of thing, and this wasn’t it. No, I was here on the recommendation that Jungle Retreat was the ideal place to put one’s feet up and chomp on lotuses, and at the same time get the feeling that one was in the midst of nature.   As I discovered the next morning (it’s a bit difficult to make judgements about lotus-eating when you’re blundering about in the dark), this piece of advice was spot on. You’ll be hard pressed to believe that at one point, the 35-acre property was a fairly bare silkworm plantation – today, after an extensive reforestation effort, it almost looks a part of the surrounding jungle. All the accommodation areas are discreetly built into the surroundings (something sorely lacking in a lot of other jungle lodges I’ve seen), with the result that you can wander around the property almost without realising you’re at a resort. My own digs were a lovely little dormitory (with fabulous roof-less showers for that open air touch), and after luxuriating in one of them, I decided to stretch my legs a bit. I hadn’t gone more than a few yards down the path from the dorm when a spotted deer leaped right across it, causing me to leap fairly impressively myself. It was a good thing I didn’t go any further, because at least ten more deer of all sizes followed their comrade; I would’ve been broadsided for sure. I discovered later that the herd lives on the property – how cool is that?! You can, in fact, not set foot outside the resort and still spot all sorts of wildlife. In the course of a couple of hours, I chanced upon peacocks, a hornbill (and many other birds I couldn’t recognise), a flying squirrel, what looked from a distance like a wild boar, a bunch of hares and a rat-snake – not bad, eh?

Later in the afternoon, I dived into what must surely be one of the most picturesque swimming pools anywhere, one built like a natural watering hole and surrounded by hills – and at night, it’s not unknown for animals to come and use it to drink from. A slap-up lunch had been laid on too, and I ate till bursting point before settling down under a shady tree and catching up on some cerebral reading matter (OK, so it was Asterix – Asterix is cerebral too, you know). Abruptly, as the sun descended behind the hills, a chill set into the air, setting up the scene for the evening perfectly – it was new year’s eve, after all, and I and the motley bunch of guests were looking forward to roaring bonfires and warming liquids. Everyone showed up at the quaint dining area, in their finest threads, and thus commenced one of the more memorable new year celebrations of my life. The mood was ineffably genial; people who had never met one another before were getting along like old friends, slapping backs and doubling over with laughter. When the gong struck, a more heartfelt round of hugs and ‘Happy Noo Yaars!’ could scarcely have been found elsewhere – don’t be surprised if my story, this time next year, somehow revolves around Mudumalai again!

Travel log
Like I said, Mudumalai is a must-visit for anyone interested in nature and wildlife. Base yourself at one of the several resorts and lodges in the area; there are any number of activities you can take part in. A trek up in the hills or in the grasslands is a fabulous option and will have you heaving lungfuls of fresh air. Get into an open safari jeep and set off on a guided safari – you’re almost guaranteed to see wildlife of some sort. If you’re lucky, a big cat sighting might come your way; the day before I arrived, a tiger had been spotted on one such safari. A night safari makes for a great experience too, for a totally different atmosphere. There’s an elephant camp and museum, where you can watch domesticated elephants being fed and bathed. Visits to nearby spice plantations and tea and coffee estates can be fun, as can be excursions to tribal villages. Ooty is only 35 km away, so a quick dash up there is possible too, if only just to buy fresh ‘Ooty chocolate’ (I did).

Jungle Retreat(www.jungleretreat.com, Rs 473 onwards) is a fantastic place to stay while in Mudumalai. It’s fun, beautifully set up and has great people running the place. Not far away is Jungle Hut (www.junglehut.in, Rs 1,250 onwards), virtually a sister concern.