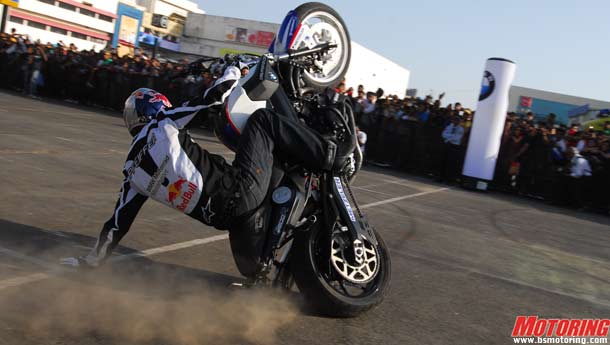 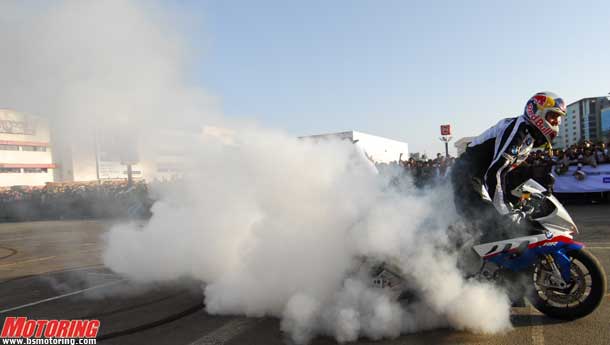 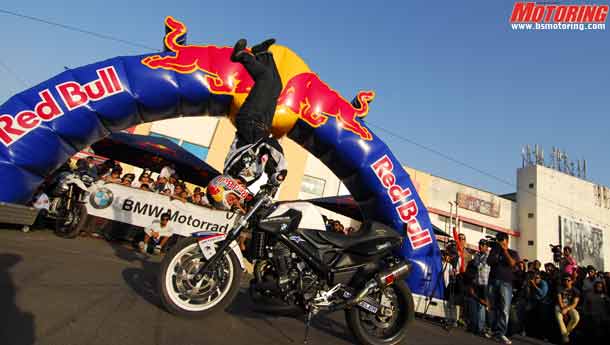 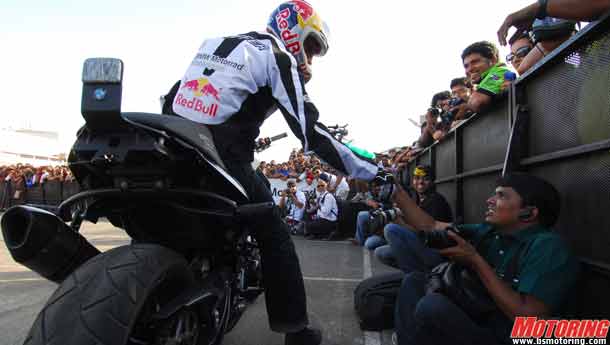 CP – It changes all the time but here are my favourites - 180 Rollback, they call it the ‘CP 180’ these days. I especially like it with a long rollback. I love wheelie combinations, also the sit-down no-hander wheelies. Pulling stoppies and then parking onto a divider or a barrier is good fun as well!’

BSM – What about your India special – ‘The Namaste’?

BSM – The next big Pfeiffer trick?

CP - ‘I like to create tricks that don’t adhere to the old school of stunting. The four categories so far have been wheelies, stoppies, aerobatics and burnouts/drifts. The 180 Rollback is something new. You never know where it will go… at the moment, I’d say the bikes are the limit. The level is increasing all the time – combinations are getting faster all the time, positions are getting crazier – it’s now sort of the Kamasutra of wheelies (laughs all around).’

BSM – What was it like, performing in front of the Mumbai crowd?

CP - ‘It was difficult today, it was dusty just like last year and I was initially just a little disappointed knowing it was the same location. But anyway, I reduced the speed a little bit owing the surface.’ (Really? It was more than quick enough for us, Chris!)

BSM – Which stunters do you respect the most?

CP - ‘In the States, it would be Nick ‘Apex’ Brocha’. As for Anygyal Zoltan (a famous Hungarian stunter), he’s a technical rider…very, very good, very technical… but I don’t like this style at all, for me, it’s old school. Palomarez for his spirit and innovation – he’s not so good in stoppies, he just loves wheelies and backflips, but he’s so fresh, you know. He’s one of my favourite riders. I don’t take it too easy when I take a decision like this. And… er …(his face lights up) yeah! Jason Pullen on the Harley-Davidson! He’s a madman on the bike, he’s so good! He rides a crappy Harley, but he does some amazing stuff! And he has style!’

BSM – How has your Moto-X and dirt riding background helped?

CP - ‘Yes, it really has! Especially on a surface like the one I rode on today. I think it helps me especially when conditions are not perfect. I know so many stunters who can only ride on a perfect surface. All that experience helps me have a good anticipation of the surface and I read the conditions pretty good.’

BSM – How do you see the Indian stunting scene developing?

CP - ‘Two riders from Pune were already on a nice level. I met the Ghost Riders stunt team again after ten months and I’m sure they’ve improved, because they were so motivated the last time we met. ’

BSM – What are the hurdles you see that are keeping Indian stunters from becoming world class?

CP - (Stunters, listen to this) ‘Nobody needs guidance in the freestyle sport. That said, these guys have no money, they don’t know how to fix their bike. It’s the same conditions like anywhere in Europe. If an 18-year old has a 636 Kawasaki, he has to put all his money into the sport at the beginning to make it to the professional level. People sometimes think it’s easy in Europe, but it isn’t. There are only a few lucky ones like me who had access to parts etc. But I think in India, it’s even more difficult.’

BSM –Would you ever consider opening up a stunt school?

BSM – Maybe after you retire?

CP - ‘You know, it’s a tough sport and the tough guys who should do it, will do it. They will learn anyway. They don’t need a teacher. In freestyle, you just try to ride with others and get advice… it’s more like a stunting family. I can only imagine myself polishing some semi-pro/professional young riders and working with them as a coach. That would be cool, but I would never open a beginner’s school. ’

BSM – Your weapon of choice? Do you like the Japanese big fours or do you prefer the torquey twins?

BSM – What do you think about the increasing number of stunt shows in India?

CP – ‘I think shows like these will help the sport become more accepted and will help the kids get away from their bad boy image. People really see that there are professional athletes doing the same, opening doors for young riders.’

BSM – How has your second Indian tour been?

CP - ‘First of all, I’d hoped it would be less hot here (chuckles). It’s a long, long tour this time around, and I think I’ve had 30 flights in 14 days now! Last time it was 5 cities, this time it’s 10 cities. Plus, all the time for TV, shoots… so I only had one day to rest in all of this. In general, I like the smaller cities rather than the bigger ones. I live in a small village back home and all this (points out to the skyscrapers and malls of Mumbai) is sometimes too much for me’

BSM – You witnessed India winning the cricket World Cup in Mumbai. How was that experience for you?

CP – ‘I’m here on the World Cup weekend and it felt like a party weekend! And yesterday evening, this was the best place in the world to be at!’

BSM – Thank you very much, Chris. When do we see you next?

CP – (Shrugs his shoulders) ‘Maybe next year, on a less dusty patch of tarmac! (laughs all around)’