BSM talks to Joseph Abraham about the Pulsar design philosophy 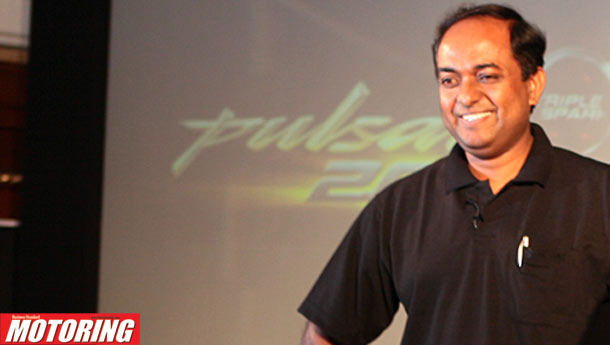 What was the design brief and the goal that was set when you started work on the NS, especially considering the benchmark had already been set high by its predecessors?

When the original Pulsar was launched, India was primarily a 100cc market, where fuel efficiency was of utmost importance. Before we launched the bike, Rajiv Bajaj and I sat down and decided to go against the norm. We wanted to build a motorcycle that did much more than just deliver high fuel efficiency. We wanted it to be powerful and fun-to-ride as well. We decided to build this motorcycle ground-up. It could not be a two-stroke, since we realised that this technology was soon to be pushed back into history. We had to break free from the prevailing fuel efficiency mindset.

What we followed for the Pulsar was the ‘platform’ approach. For example, in the West, motorcycles change rapidly; the platform lifespan is short-lived. Since manufacturers have to return a profit from relatively small numbers, the product cost is expensive. However, in India, it’s the other way round. The platform has to have a long life, since the numbers have to be large in order to bring down product costs.

The Pulsar 150 and 180 is a classic case in point. The platform is the same and just through two different engine capacities, we were able to reach out to two different audiences. However, every platform has its limitations. We had reached that limitation with the P220. We had to take the Pulsar forward, but design a platform that would be long-lived, especially since the old platform stood firm for 10 years.

The Pulsar evolution is never static. It has to have the ability to move ahead in time with the current market requirement – it always has to be current. Work on the NS started three years ago. We thought that the new Pulsar should be ready for the future, till the end of its product cycle. Every component was debated upon to see whether or not it was required to deliver the Pulsar experience. The desire of the customer had to be fulfilled. Bajaj used its own intuition rather than relying only on market surveys.

Bajaj has played a large and important role in the engineering of the KTM Duke 125 and 200. How much of this work has influenced the new NS?

KTM is known for its high performance bikes and the company operates in the high price segments. Compared to the Japanese manufacturers, KTM pricing is more premium. Bajaj spearheaded KTM’s move into the lower price, lower displacement motorcycle segment, which is more mass market. Alongside, Bajaj needed to gain access to the European market, more so, in the premium motorcycle segment. KTM and Bajaj have a great rapport; in fact, the R&D teams of both firms began working together even before a formal document was signed. With KTM, Bajaj now has a better understanding of the European market.

As for the products, not much has percolated from the KTM Duke 200 to the Pulsar NS, apart from some engine bits. The reason for this is that the tooling costs for the engine are expensive, and it made sense to share some parts between the two motorcycles. The connecting rod and below are partially shared between the two. However, the parts that contribute to the individual character of the two motorcycles are different, thus retaining their identity.

Two spark plugs and now three. Has the two-plug head reached the pinnacle of its development?

The twin-spark plug setup was good for a two-valve head. The triple-spark plug was brought about for maximising efficiency in a four-valve head, with a pent roof combustion chamber contained within. With this technology, even when the incoming air/fuel mixture is lean, like say during a partial throttle opening, the burn rate is still quick enough to produce good power at an efficient rate.

Why does the new NS sport a SOHC setup and not a DOHC setup, apart from the difficulty (as we see it) that this would pose to the placement of the three spark plugs?

Actually, SOHC was implemented simply from a cost standpoint. KTM can afford DOHC for its Duke 200 because it operates at a higher price segment in the market.

The Pulsar, however, is meant to be a cost effective yet powerful motorcycle that is accessible by a larger market.

What particular difficulties did you face when designing Bajaj's first move from a twin-spar cradle, twin shock frame to the perimeter frame with a monoshock?

None, really. Sound engineering with a solid foundation has been a Bajaj forte. The only thing that held us back from introducing technology like this before was the cost and whether the market was ready for this next step. Bajaj has the entire expertise to design, test and validate a product through every step. Our R&D facilities are truly world class.

Bajaj has applied for a patent for the triple-spark plug technology. What are the details of this patent application – what capacity engines, number of valves, applications etc?

I would like to avoid answering this question for now, since it is a sensitive one.

Do you think this three-spark plug technology seem viable for large displacement engines?

Definitely. But there are some constraints that one would face in packaging this technology into a multi-cylinder car engine, for example. I’d like to say this – one must realise that we have engineered a specific solution for a specific problem. The triple-spark plug technology addresses the hurdles we had to overcome with the four-valve head. But yes, as I see it, this technology can be implemented elsewhere.

This was a two-valve head with a twin-spark plug design. The Pulsar 180 DTS-i saw an increase in power of 1.04 bhp over the standard Pulsar 180, and torque went up by .15 kgm. This new head design allowed for a cleaner and more complete combustion. It allowed the engine to make more power and lower emissions too.

The head went from being a twin-spark plus twin-valve head to a four-valve, triple-spark head. The combustion chamber is now what is called a pent roof combustion chamber. Despite having less cubic capacity than the Pulsar 220, the new Pulsar 200NS still makes more power and torque, thanks to the new head, among other things. The 220 DTS-i made 21.04 bhp, while the 200NS makes 23.52 bhp. The fuel burning rate has been improved by 50 per cent over when only one spark-plug was firing, and 27 per cent over when two spark plugs were firing. It's available only on the 200cc engine, but we could expect to see this technology being used in higher displacement engines as well.

This frame is revolutionary in design and a first for Bajaj. It is much stiffer than the previous one and gives much more handling prowess to the motorcycle; together with the new Nitrox monoshock at the rear and front suspension, this bike handles like no other Pulsar before it. Thanks to the suspension, the wheels track the road more accurately, and shock transmission to the rider has been minimized. It has been designed to take engines of higher capacity as well, with minor modifications. We should expect to see this frame service in a string of new Pulsars.