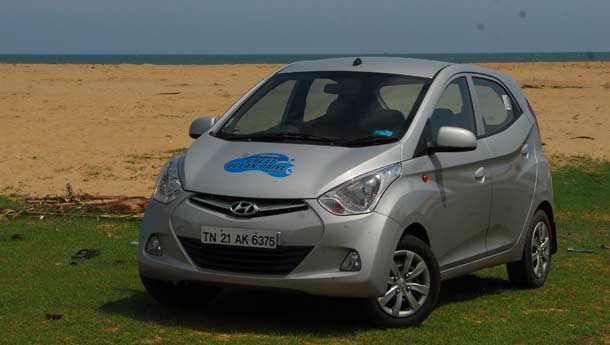 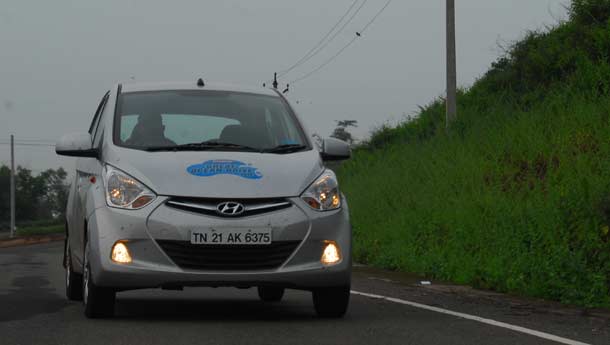 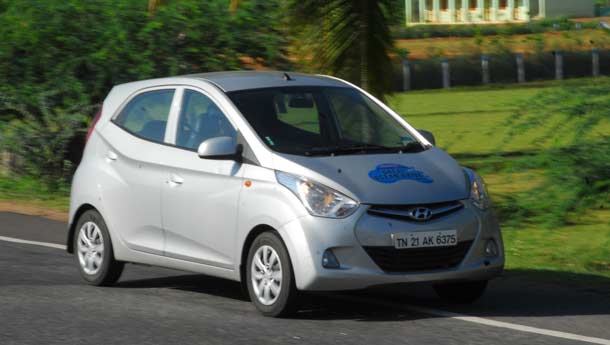 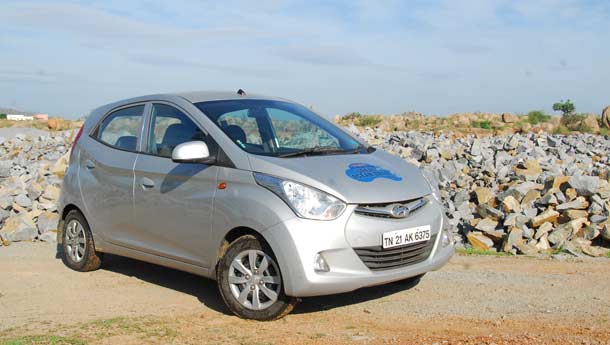 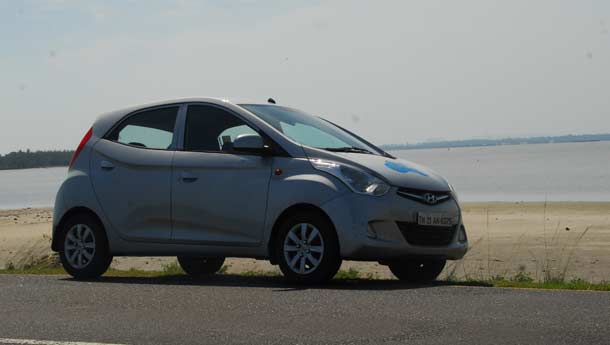 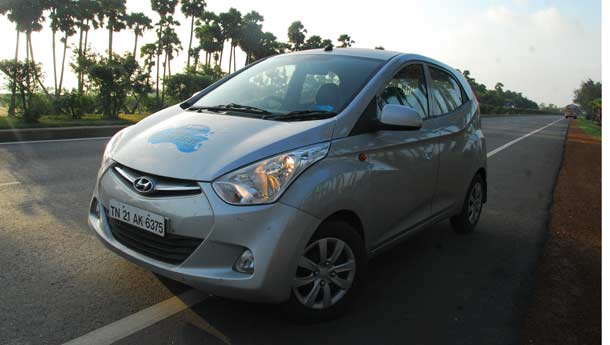 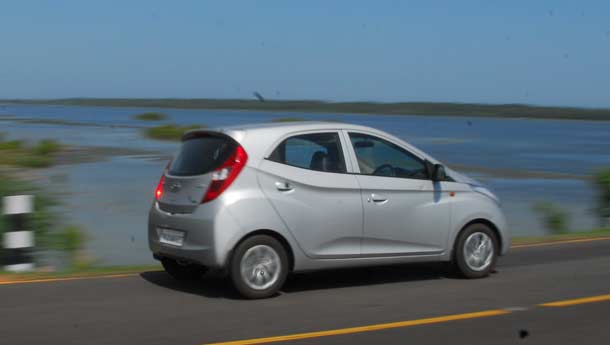 As promised, we’re back with the second leg of our massive coast to coast drive with Hyundai. In fact, we’re starting off right where we left off last time – Thiruvananthapuram. The only difference is, this time, we have a lot more distance to cover of the eastern coast of India, but we do have more time to cover it in. And yes, instead of a Hyundai i20, we have the pint-sized wonder, the Hyundai Eon, doing duty this time around.

We picked up a gleaming silver Eon from the dealership. The modern design and refreshing interiors in the Eon meant that we didn’t, at any time, feel like we were downgraded from the i20. So after a quick systems check, we were off again. We headed south till we couldn’t go any more south! Yes, we were in Kanyakumari, the southern tip of the peninsula, the point where three magnificent water bodies meet: the Arabian Sea, the Indian Ocean and the Bay of Bengal.

It is said that from a suitable vantage point, one can observe three different shades of water merge at a certain point, but at 5am, the only colour we could see was a rich and vibrant orange as the sun rose up over the horizon. There’s something very mesmerising about a sunrise over water. The water catches thefirst rays and refracts them into colours you didn’t think you could otherwise see!

We just couldn’t stop staring at the east that morning, so after the sun had risen and had turned from an orange orb into a bright yellow source of heat, we knew it was time to get into the Eon, with its powerful AC, and start our figurative climb northwards. Our target for the night was Chennai, Tamil Nadu, with a small detour to Puducherry. With a little under 750 km of driving in front of us, we knew we were in for a long day of driving indeed. Thankfully, as we crossed Panakudi, the highway suddenly widened to four lanes and there was the additional safety barrier of a high central divider with tarmac as far as the eye could see! Because the roads were in such perfect condition, we could maintain an average speed upwards of 70 kph all the way into Chennai. Despite being delayed somewhat by watching the day’s sun rise, we managed to enter Chennai by about 6pm, just in time to watch the sun disappear.

Normally, Chennai is a pretty peaceful city, but with the new metro coming up, traffic in this city has become utterly chaotic. Apparently, even the locals can barely navigate this mess of one-way streets anymore. This was a little reassuring, because we found ourselves asking for directions at every turn until we finally gave up and found a hotel for the night.

From Chennai all the way through to Kolkata, the Golden Quadrilateral project takes over, where the entire stretch consists of fantastic roads with nothing but smooth blacktop as far as the horizon stretches. It was a four-lane toll-road, with a toll booth every fifty kilometres or so, which may seem like a decent distance, but considering the kind of mileage we were doing, slowing down for the tolls felt a little repetitive. The toll itself was well worth paying though, because the roads were beautifully maintained. If that’s not enough, there are plans to widen these roads to make them into six lanes!

The roads may have been wide and clear of traffic, but the sun was bearing down on us, with nary a cloud in sight. This was a real test for the Eon, a test to see how well its AC cooled the cabin. A test it passed with flying colours, because we found ourselves having to turn down the AC, it got so chilly inside. With two drivers of vastly different shapes and sizes, driver changes would have been a pain, but with the tilt adjustable steering and a seat that could be adjusted however you wanted, getting comfortable behind the wheel of the Eon was a breeze.

Leaving Chennai in the morning, we were well into Andhra Pradesh by lunch time, and what better than to munch on some Andhra savouries, right? Some dosas with ginger chutney were just the thing our growling stomachs needed to push on towards Nellore for the night. Nellore is one of the major districts in Andhra Pradesh, famous for its spices, so you can bet we were reaching for bottles of water as we tried some local delicacies here.

From Nellore, it was a straight drive through to Visakhapatnam, but there was a choice we had to make along the way. At one point, right after Ongole, the road bifurcates, with one road hugging the coast while the other heads a little inland. Sadly, pressed for time and with a flagging sun in the sky, we chose the faster route over the more scenic one. We can’t say it’s a decision we regret though, because we managed to hit the outskirts of Visakhapatnam by 6pm, by which time the sun had already gone down, leaving us with the eerie sight of the steel plant and shipyards.

Visakhapatnam houses one of the country’s oldest shipyards and you can always spot a ship or two on the horizon as you drive along Beach Road. It may be the second most populous city in Andhra Pradesh, but we’re guessing all those people would rather spend their time elsewhere, as the beaches were more or less empty. Driving up and down Beach Road, it’s very easy to lose track of time, too. In fact, we were having so much fun, we almost ran the Eon dry there. Had it not been for the well-lit LED gauges in the instrument cluster, we’d probably have been walking along that road with a jerry can in hand!

Head back towards NH 6 from Visakhapatnam and you’ll soon be in Odisha after not too long a journey. As you get into Odisha, the road meanders inland a little, and gains a little altitude as well.  The view only gets better with that altitude though, as you get panoramic views of the Bay of Bengal if you can manage to get to a good enough vantage point. We didn’t stop for too long though, as we had to push on to Bhubaneswar for the night.

Chilika lake, the largest lagoon in India and the second largest one in the world, was also a sight to behold. Leave your nose in the car though, because the fishy smell will overpower your olfactory senses into submission! So, we get back in the car, keep the internal recirculation on and continue along this road. In Odisha, the road still remains more or less straight as an arrow, maybe curving a little as it circumvents a village. The scenery is pretty, but with the sun bearing down on us, there was no desire to stop and take in its beauty.

Along this road, we encountered most people driving on the wrong side of the road .

It’s a good thing there was great visibility on this road, because we were really in no hurry to test out the driver side airbag that our Sportz model came equipped with!

Soon enough, we were at the outskirts of Bhubaneswar. The relaxed driving during the day meant we had enough energy in us to explore the city a little, so naturally, we headed for the first restaurant in sight and had a hearty meal before hitting the sack for the night.

After this, one more day of light, relaxed driving through the rest of Odisha and into West Bengal and we’d be done with this epic trip! We’d have arrived at the gates of the City of Joy - Kolkata!

And what a place it is. Entering the city from the south, you’re presented with the bustling Howrah bridge to cross, and we found ourselves in the heart of this beautiful old-world city. There were no skyscrapers here, nor were there any buildings with huge glass facades, just some good old brick and mortar with just the right amount of deteriorating paint to show character.

Electronic power steering was a boon in this city, as the tight quarters and heavy traffic meant our arms would have fallen off otherwise. The traffic aside, there’s just something special about driving here that can’t be replicated elsewhere.

So, at the end of eight days, we had covered a total of 4,500 km, having driven through nine states and passed by so many beautiful, deserted beaches. You don’t need to go the whole hog, but get a taste of the coastal roads and you’ll be tempted to traverse the entire journey! Get a Hyundai for company, and your journey will be memorable.