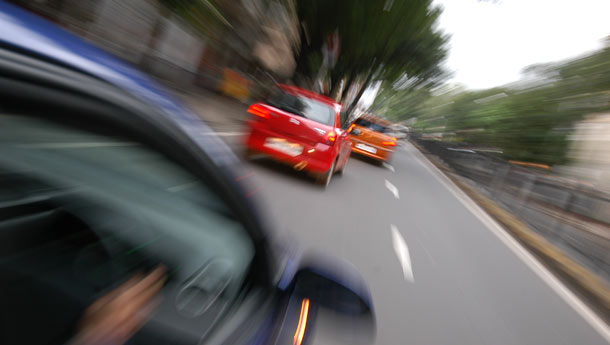 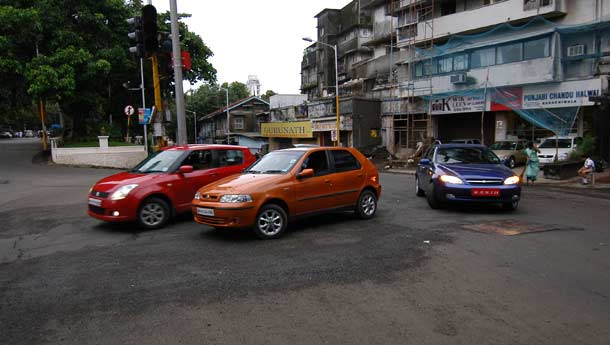 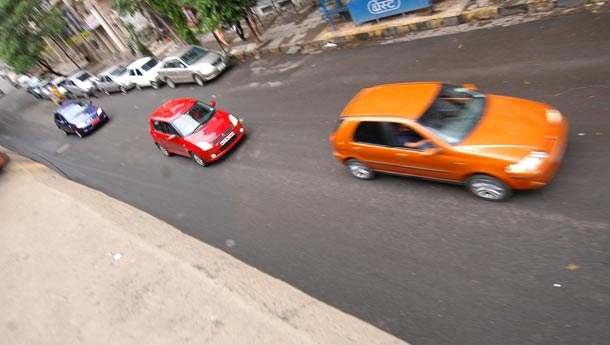 Just around the corner: In a fantasy F1 circuit in Mumbai, the Raj Bhavan hairpin would beat Mirabeau at Monaco as the slowest corner in F1 – a great spot to swap paint and tales. The Under The Over right-hander (extreme left) and the Parsi Fire Temple straight would be other spots for viewers to grab some really thrilling action.

Imagine if a part of Mumbai could be turned into a street circuit for one week every year. Imagine roads lined by armco barriers and advertising panels. Imagine fans cheering as Michael Schumacher lets his Ferrari rip through Malabar Hill. Imagine wheel-to-wheel action at Teen Batti junction.

Well, we had to do this. After years of dreaming and plotting, we decided to simulate a race on the streets of Mumbai. Yes, ‘simulate’ is the operative word here, and that means we didn’t endanger the lives of fellow citizens of Mumbai while we were at it. As you can make out from the track diagram, we didn’t use two stretches along Marine Drive for this event, but you do get the picture. So one quiet Thursday morning, three test-drivers slithered out of their beds and drove three hatchbacks to the start-finish line at the end of the Chowpatty straight. The tarmac was wet and the atmosphere tense.

Well, the cars involved were chosen because they were all relatively fun-to-drive machines and because they needed to feature in a comparison test in any case – the Fiat Palio 1.6 GTX boasting impeccable power-to-weight ratio, the Chevrolet SRV featuring grown-up underpinnings and the Suzuki Swift sporting a very long second gear and fine handling. Both the Palio and the SRV boast 100 bhp motors while the Swift gets away with an 87 bhp ticker derived from the Esteem. Now, all of us know that the Swift has won hearts, awards and sales in a big way – but if your idea of a personal hatchback is pure driving fun, isn’t the old Fiat the natural choice? Or should you pump in a couple of lakh more and buy the beautiful SRV?

The Mumbai GP, of course, was the ideal way to settle this issue. Those who are not familiar with Mumbai, please do a Google Earth search before continuing!   A paragraph on our street track won’t hurt, right? Ideally the cars, if they are of the F1 variety, should wait for the five red lights at Marine Drive. Then they would hurtle down through Chowpatty beach to take a second gear left hander to reach the point where we started our race. Then onwards it is an uphill run through Walkeshwar well into Malabar Hill. After the near-zero Raj Bhavan hairpin, a fast straight will send the cars through to Hanging Gardens with a chicane to slow them down before being flung into the downhill stretch. The most characterful corner will be Under The Over at Kemps Corner junction and then onto the Parsi Fire Temple straight and right hander. Another left at Sportscraft signal would let them onto Marine Drive again, where F1 cars can liberate their 800-plus horsepower and deliver 300 kph action through Wilson College straight. Then a Gymkhana hook would turn them back to the start-finish stretch. It would be a brilliant 6.5 km track – but since we didn’t have 300 kph cars, we shortened the action and went straight to Walkeshwar from the Sportscraft signal, making it a 4.5 km track.

The tangerine mist 1.6 driven by enthusiast and BSM’s good friend Amir Ali Jetha got off the block like a bullet and immediately passed the Swift before it could get into second gear. The SRV’s notchy gearshift meant the Chevy had to trail the Swift driven by me (heck, I own it and I was not going to let anyone else drive it!), but when the Swift dropped revs to get into third gear, the Chevy edged past to the second slot.

The Grand Prix was well and truly on.Before we knew it, we were at the Raj Bhavan hairpin (it will be slowest corner in F1 as and when...) and the slightly older Palio (faded brakes?) missed the apex and ran a little wide with the SRV almost on its tail. The small gap was enough for me to bring the Swift to second gear and nudge its nose into it. The moment didn’t last long, but the Swift with its pivot-and-turn ability was now heading the GP.

Halfway through the uphill run to the Hanging Gardens chicane, two blurs passed me – first the Palio, now being driven by a rather possessed Amir, and then Srini who almost clipped the bumper of the Swift as he passed me. I really felt like a hapless Monteiro in  his Midland F1 as he is unforgivingly passed by Massa and Webber  in their Ferrari and Williams yet again.

Surprisingly, the Palio didn’t even lift-off through the rough patch that led to the downhill run and the car looked absolutely well composed. The SRV stepped out a little under heavy braking and suddenly it was me who was trying not to tailgate Srini.   Srini made his move gunning down the tree-lined strip of tarmac as he lined-up nicely and almost pulled off a clinical overtaking manoeuvre over Amir and his Palio. In their effort to fend off each other, both drivers forgot the fact that an acute right hander, the Under The Over, was almost on them. Sensing the opportunity, and knowing fully well that the Swift could pull it off, I stayed off the brakes well into the underpass and then tried to shed some speed.

Too bad Amir had calculated the apex to the last millimetre and tucked the Palio into the void created by the Swift as it ran wide. But heck, the little Suzuki was still holding back the mighty Chevrolet, I thought, as I snapped through the gears, sending revs through the roof as we screamed down the Parsi Fire Temple straight.

Now, the temple corner was in sight and the Palio was gaining furiously – lifting the right rear wheel as Amir anticipated and corrected a three digit understeer moment. I decided to play chess and moved the little pawn of a Swift into the inside line and thereby blocked Srini and his steaming SRV completely. Enough really for Max Mosley to slap a US $5,000 fine and issue a one-race ban for ignoring the blue flag. The bigger, better brakes of the SRV saved the Chevrolet from morphing into a Chevrozuki.

But Srini and the SRV were not done. I could hear him downshift into third and then second as I did the same too. Both cars ran fender to fender for almost 500 metres before I chickened out. Amir was almost three car lengths ahead and the SRV was now clearly ahead of me.

Amir threw the Palio into the final right hander and gunned for the finish line. For a moment it looked like the SRV would catch up with the Palio, but it didn’t. The Palio took the win by a car length while the Swift came through third – but with its head held high. At least mine was (underpowered car, no overtaking room... I was already uttering excuses). The Palio took 6 min 24 secs to cover the 4.5 km loop (shortened) track section. Something that a hard-charging Alonso and his Renault can do in 1.13s.

In case you are still not certain, the Fiat Palio proved what a weapon it can be when driven hard. But it could do with better brakes. The SRV is unfortunately more expensive but for the additional money you get better, confidence inspiring road holding and handling. The gear changes, and to some extent the additional weight are the low points. The Swift is impeccable fun even when driven along with bigger hearted companions and it is still the master of tight corners. It desperately needs stiffer shock absorbers (Koni, listening?) to make it more of a performance car for the road, and yes, it feels as if the chassis can take another 50 bhp easily. After exchanging cars, more driving and photography done – we went on a hunt for breakfast. While swallowing croissants and cakes, each of us silently pondered at the possibility of a real Mumbai GP. Deep inside our ear wells we could hear revs build up and V8s screaming their heart out. We could hear explosive gear changes echoing from art-deco buildings that line Marine Drive. We could hear the crowd cheering as the winners did a lap of honour.

I am mailing this story and pics to Bernie, in any case. We haven’t lost the power of imagination, right?