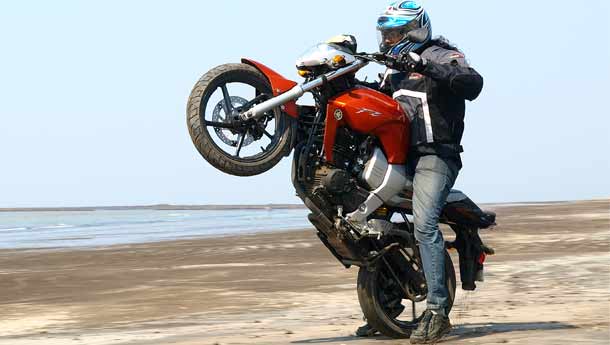 It’s that time of the year again, when we pit all of the latest entrants on the Indian motorcycling scene against each other, before declaring the coveted Bike Of The Year winner. The bikes selected for this year’s brawl were the Royal Enfield Thunderbird Twinspark, Honda CBF Stunner, Bajaj Platina 125 DTS-SI, Suzuki GS 150R and the two Yamahas, the YZF R15 and the FZ16.

Before the final duel, the eliminations were severe and all aspects were considered. The Twinspark got the axe, despite its wonderful all-new unit-construction engine, simply by virtue of its old Thunderbird styling and frame. We wanted a totally new-from-scratch motorcycle. And in that light, the Platina was ticked off the list too, as the Bajaj’s 125cc engine isn’t entirely new. The same applied to the Stunner – despite the great styling, its engine is a tweaked Shine mill after all.

The final three contenders were the Suzuki and the two Yamahas. The GS 150 was launched in 2008 and had to be considered, but the bike reached us too late to be pitted against the rest. It’ll be definitely be considered for BOTY 2010, however. The jury members, comprising road testers from BSM, felt that the GS put up a very strong fight indeed, but had to place it third. A very close third.

The GS is a great bike for what it is, sports one of the best looking instrument clusters on any Indian two-wheeler and boasts impressive build quality. But it does have a little less all-round merit when compared to the motorcycle that placed second. That bike, the runner-up, is the Yamaha R15. It’s a superb motorcycle, bristling with technology that was out of the reach of the Indian motorcyclist not too long ago. Liquid cooling for the 17 bhp engine, tyres as sticky as superglue and impressive handling are all included in the R15 package. However, the R15 isn’t one of the most practical bikes around, especially for the city, and comes at a price that would put a big dent in the pocket of a potential buyer.

That said, we have the honour of crowning the new king of the ring, the Yamaha FZ16. The FZ has brought in a new era of motorcycling in India. Never before has motorcycle styling been so aggressive and unconventional in the country. The butch and macho rear is great to look at. Stop astride a FZ at a red light, and the chiselled tank along with the shapely headlight is sure to grab  attention. A great engine tuned for low-end grunt makes it great to ride in the city and the handling, while not as greatas the R15’s, is quite adept. The FZ16 is a motorcycle that you can commute on, tour if you insist and stare at while it is ticking away in your garage after a long ride. And what clinches the crown for the FZ is its affordable price. In fact, we still are wondering how Yamaha has managed to give so much for so little in return. But no, we aren’t complaining. Hearty congratulations to the Yamaha FZ16, then. It certainly isthe best all-rounder and our winner for 2009. And we congratulate the two other competitors too. The R15 and the Suzuki GS 150R are creditable efforts by their manufacturers and are both eminently recommendable motorcycles.