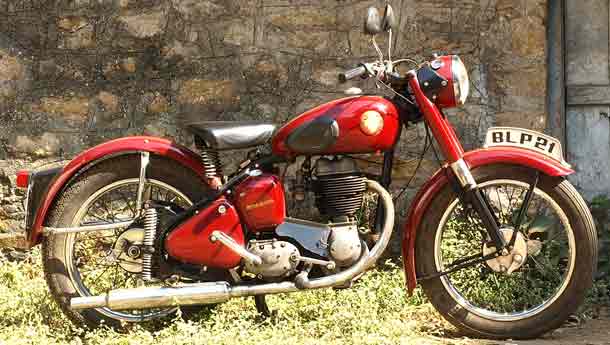 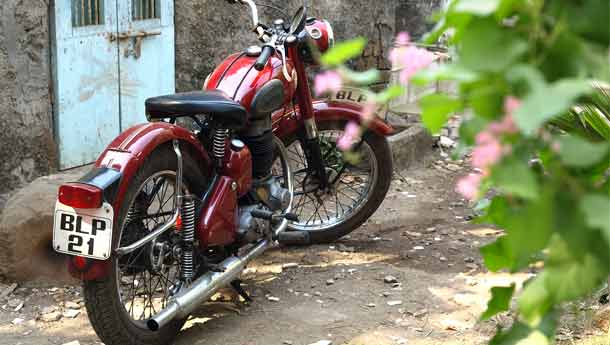 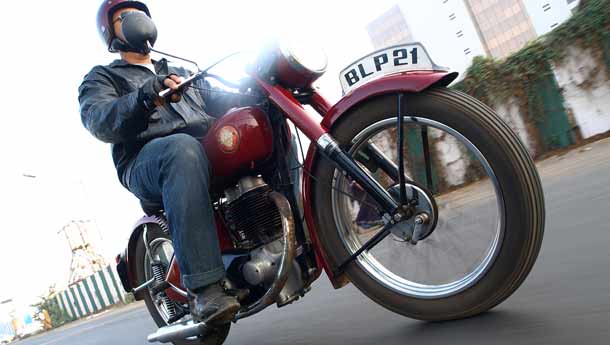 It has been nearly eight years since the end of the second Great War. Times are trying, nearly everybody I know has lost someone to the fighting. The economy is in the doldrums and thousands of people are without jobs. Commodities are in short supply and almost everything, including petrol, is being severely rationed.

Mother hasn’t found a job ever since the ammunition factory she worked at during the war shut shop. Dad’s busy all day, laying bricks of houses being rebuilt, but he’s always complaining about how people aren’t forthcoming with the money these days. Yes, these aren’t the best years, but I keep myself content by helping dad out. I do have to confess though, I haven’t been concentrating too much on work.

Dad has been working on repairing the pantry of  Mr Givmemy Greenbucks’ house. Mr Greenbucks is the richest bloke in our shire and lives with his young son, Master Silverspoon Greenbucks.

The senior Greenbucks was an avid motorcyclist before the war, but the fighting has drained away his interest in all things two-wheeled. But his son has taken off from where his father left and although all of his old man’s bikes are gone, he’s got himself one of those new fancy peashooters – a shiny Triumph Terrier, and I couldn’t get my eyes off it.

The Terrier is gorgeous, with the ‘big bike’ styling that gives it the resemblance of the much larger Triumph twins. Classy grilled ‘Triumph’ badges adorn the sides of the fuel tank and the headlight nacelle has a chromed flash along its flanks, with a smart looking instrument cluster fitted.

The more I see podgy Silver ride around on the Triumph, the more forlorn I become.  Slick Sam, a buddy of mine, rode an Ariel Colt and Brawny Bob, the big school bully, used to ride around on an old beat up Norton. I wish I owned a motorcycle too, but something that was quick and cheap to run. Everybody seemed to be having all the fun.

One evening after we’ve come back home to a piping hot dinner cooked by mom, dad, sensing something is amiss, asks me what the matter is. I tell him that I had been eyeing the Terrier and couldn’t take my mind off it. Dad smiles, and then says, ‘Son, you know we can’t afford one of those. But you know what? Your elder brother is out at sea and he doesn’t ride my motorbike anyway. You can use my old thumper. I think you have worked hard enough for it and besides, it’s time you finally got around to using your riding permit.’

Suddenly, I lose my appetite, and mom’s succulent roast meat doesn’t seem interesting anymore. I excuse myself from the table and rush up to my room and jump into bed. All I wanted to do that night was to swing my legs over dad’s BSA and ride into the distance, with gorgeous Pretty Polly sitting behind! Pretty Polly, incidentally, is the prettiest girl in the whole wide world. At least that is what I think. She stays a block away from my house and my heart skips a beat or two whenever I see her pass. Maybe she’ll notice me on the motorcycle, maybe she’ll ask me to accompany her to the village fair, maybe she’ll...
And then my eyes open; mom’s rousing me up from my deep slumber. I change and rush downstairs, hoping that all of what happened last night wasn’t just a dream. Dad’s sipping a cup of tea and he looks at me and says, ‘Go on, son, she’s all yours!’ I run out, clean the grime away and gaze at my father’s BSA C10. Little did dad know, I was already familiar with it. I had ridden it without my father’s knowledge (at least that’s what I thought) but now, the old Beesa looked different, better – it was now mine.   The BSA is an old thing, almost like a relic from the Middle Ages. The engine is an archaic 249cc single-cylinder mill and breathes through a couple of valves plonked onto the side of the head. A three-speed gearbox transmits the drive to the rear wheels. The drivetrain is mounted onto a rigid frame. A girder fork does the shock absorbing work in the front and there’s no suspension at the back, except for the two tiny springs beneath the seat. The whole bike weighs about 140 kg without the rider.

I furiously kick the bike to life and ride off to work. The day seemed to go on forever, and I was impatient to dart straight out of work to the main street, and ride around, hoping for Ms Polly to catch a glance of me on the bike and be swayed off her feet!

I got to the street, and parked the bike outside Smelly’s Fish and Chips for a bite. As I stepped out after a quick snack, there stood Polly, dressed in a pencil skirt and a bright red cardigan, right in front of me. My jaws dropped to the floor, and her hair seemed to glow in the fading sun.
‘So you now have a bike, Tim?’
‘Yeah, it’s my dad’s. He said I could ride it around.’
‘Aha. I would certainly fancy a ride
on it.’
‘Wow! That would be splendid. Hop on.’

We get onto the bike and my heart is thumping like a drum being beaten furiously. After a few kicks, the engine springs to life. Off we go. I race towards the countryside, for a brisk loop through the twisty roads and back to the village. The roads are narrow but the traffic is light, and I push the old BSA to its maximum of 55 mph.

The ride is harsh, however, and I fear that my vertebrae are going to telescope into each other with the next bump. That doesn’t happen, thankfully, but Pretty is getting quite shaken up and by the time we get back, she’s had enough.
‘That wasn’t fun at all.’
‘I’m sorry, but the roads were quite bad.’
‘It’s not the roads, it is your bike. Are you always this dumb or did you hit your head with a brick this morning?’

And she stomped off into her house, slamming the door behind her. Damn, she’s out of my hands forever, I sigh. But what the heck, I still have my dad’s C10. So what if its engine leaks more oil out than it keeps in. Despite the ride quality of a stone crusher, this old BSA was now mine.Months go on and that little incident seems like it happened decades ago. My brother is back home from sea for a while and he notices that I had started riding Dad’s bike.
‘So how’s the old girl doing?’
‘Not too bad.’
‘Ha! Looks like she’s falling apart, Tim. You really need a new bike if you want to get well acquainted with that lass you have been head over heels for.’
‘Well brother, I’m not going to get a new bike anytime soon because I can’t afford one, and besides, Polly doesn’t even look my way anymore.’
‘Hmm, I shall see what I can do about that.’   A couple of days later, I get home from work with dad, to find my mom and brother looking at me, grinning.
‘Did you see what we got you, Tim?’
‘No, I didn’t, mom. Wait, was it that heap by the front door?’
‘Yes, did you see what’s underneath it?
‘Hold on, I’ll go check it out.’

This was one of the best days of my life. There, underneath the old tattered blanket, was a brand new BSA C11G. The new machine came with an option of a rigid frame with a three-speed gearbox or a plunger frame with a four-speeder. Dad, mom and my brother felt that I deserved the best and so they picked up the one with the four cogs. And yes, the engine was a new 249cc OHV unit!

I kick it and guess what, it starts up to a steady chug-chug-chug in just one kick, all thanks to the good folks at BSA who had ditched the old magneto ignition for a better performing battery ignition system; the ‘G’ in the model name of course stood for ‘generator’.On the run, the engine feels a lot smoother and revs far better than dad’s C10. Power delivery is smoother and the top speed has been stepped up to about 60 mph, despite weighing a whole five kg more than the side-valver. The extra fourth gear does wonders for highway cruising and at speed, the engine seems much less stressed too. Going through the cogs is like slicing paper with a scalpel and every gear slots into place without any complaints.

Just to see how much better the ride of the C11 was over the older BSA, I took it out over the same roads Polly and I had headed to a while ago. It was a totally different experience. The telescopic oil damped forks did a small job of absorbing the shocks and didn’t rattle nor shake while in operation. My rear felt like it was encased in goose-down pillows while the plungers oscillated up and down, helping prevent the bumps from getting to me. The brakes, however, are only marginally better than the C10’s setup. The rear brake tends to lock up quite easily while the front drums don’t bite hard enough. The feel, however, is very pronounced.

As I headed back to town, I had a big grin on my face. At last I was almost as quick as that stuffed brat Silver, and my C11G returns nearly 30 kpl, almost five more than dad’s old side valver!I pull up at Thrifty Doug’s Grocery Store to pick up some groceries for mom. While standing in queue, waiting to pay for my purchases, I get tapped on the shoulder. I turn around, and there she is, Pretty Polly, smiling a smile that could make the world stop spinning.
‘The girls have been raving about your new bike, Tim.’
‘Really? But I just got it.’
‘Well, good news travels fast.’
‘Fancy a ride after I drop off this stuff
at home?’
‘I would love that!’

A great bike to ride, cash in my pocket (all thanks to the frugal running costs of the BSA) and a pretty girl riding pillion. Ah, finally, I had arrived in life! BSM
The C11G featured on these pages was the first motorcycle my brother and I had restored. And we haven’t stopped since – we’ve got completely hooked. Now, in case you are wondering, no, I don’t know any Pretty Polly; although I wish that my dad did indeed own that C10!