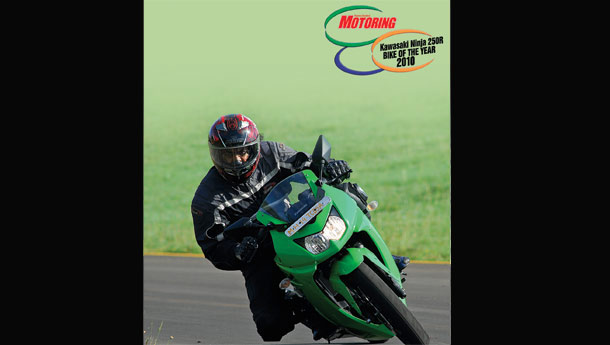 It surely took a long time coming, but now that it has, it’s got top clearance from us. Ladies and gentlemen, say hello to our Bike Of The Year 2010 — the Kawasaki Ninja 250R! While there was an impressive list of opponents to the Ninja, none of them could handle going toe-to-toe with the Japanese warrior. And it wasn’t just its bright green colour either. But more on the Ninja later; let’s see who it was up against, shall we?

First off, the Bajaj Discover 100 DTS-Si that marked Bajaj’s return to 100cc bikes. While it impressed us with its refined motor and will sell in huge numbers, it loses out on account of having a new engine in an old frame and styling. Then there are the TVS bikes — the RTR 180 and the Jive. While the former is the flagship powerhouse, the other is the latest commuter from TVS. The brilliant 180 didn’t win because it was only a marginal step up in performance and handling, nothing revolutionary.

Maybe, for next year, TVS can build a 250 and make things easier for us! The Jive has been launched, but our ride on it was all too brief for us to reach any definitive conclusion about the motorcycle.

Hero Honda’s Karizma ZMR features top-of-the-line specifications, but the power and character remain the same, leaving it out of contention. The Pulsar 135 is another fun to ride motorcycle launched this year, but only enough to collect third place. Royal Enfield’s big singles — the Classic 350 and Classic 500 — were big news this year.

While the Classic 500 has exceeded our expectations, this timeless design wrapped around contemporary technology gets up to second spot on the podium. It offers the same RE experience, much enhanced in some aspects, but it still isn’t enough to offer Indian motorcyclists an all-new experience.

And this is where the Ninja shines. It raises the bar of Indian motorcycling, barring of course, the full-blown imports. And the Ninja isn’t scaled-down like the Yamaha R15 either. Where the R15 features excellent handling but power that we’re already used to, the Ninja is a genuine 160 kph motorcycle that delivers the quickest acceleration too. The balanced handling package is always poised for action which makes the Ninja a willing ally to slice and dice twisty roads.

Not only that, it will also play the role of everyday commuter with ease, thanks to its broad spread of power and comfortable ergonomics, and this all-round capability is what sets it apart from it opponents. And while we think that at around Rs 3 lakh, it is a little on the expensive side, what it offers more than makes up for the premium you pay for it. More than anything, since the R15, the Ninja is the first motorcycle to change Indian motorcycling and we love it for that.