A view of vehicle showroom after offering discounts of up to Rs 12,500 on BS-III models to liquidate stocks,a day after the Supreme court banned sale and registration of such vehicles from April 1,in Allahabad (Photo: PTI)

It’s time for year-end sales of two-wheelers by leading brands because of the Supreme Court’s Wednesday order, which banned sales of vehicles complying with Bharat Stage-III (BS-III) emission norms from April 1.


Saddled with a few hundred thousand BS-III two-wheelers, industry players, including Hero MotoCorp, Honda Motorcycle and Scooter India (HMSI) and Bajaj Auto, are offering discounts of up to Rs 22,000 on BS-III two-wheelers to clear the inventory.


The two-wheeler industry had about 670,000 BS-III units as on March 20. A significant number has remained unsold despite the push from companies since March 21. Companies will look at options to export the unsold stocks after March 31. These discounts will have some impact on the fourth quarter (Q4) profitability of companies, which will also take a hit during this quarter, owing to a decline in volumes after demonetisation.


The steepest discount comes from Japanese auto major HMSI. HMSI, which also took out dvertisements in leading national dailies on discounts, said on its Facebook page that it was offering a cashback of up to Rs 22,000 on any Honda BS-III motorcycles and automatic scooters purchased by March 31. The second-biggest player in the domestic two-wheeler market did not respond to queries on discounts. Hero MotoCorp, the country’s biggest two-wheeler maker, is giving cash discounts of up to Rs 12,500 and free insurance on most BS-III motorcycles and scooters.


Being the biggest player, its inventory of BS-III two-wheelers is the largest.


These are significant discounts, considering the price of an average two-wheeler, which is in a range of Rs 40,000-50,000. But what is triggering these discounts?


A company executive said there was an option to upgrade these two-wheelers in order to make them conform to BS-IV emission norms. But that process is elaborate. The manufacturer will have to take back the product from the company’s dealers even though billing and payment have been made by the dealer on such products. The next step would be dismantling the two-wheelers and then retrofitting them with a BS-IV engine and other components. “The process could cost almost Rs 15,000 for one such two-wheeler. And then it needs to be transported back to the dealer. There would be thin or no margin left to be shared between the manufacturer and the dealer after this process,” said an executive of a two-wheeler maker.


Pune-headquartered Bajaj Auto, which had approached the Supreme Court to stop automobile makers from selling BS-III vehicles after March 31, is also affected. It is offering discount and free insurance across models. The discount at its entry level motorcycle CT100 is Rs 3,000. The Avenger and Pulsar RS200 will come at a discount of Rs 7,000 and Rs 12,000, respectively. The company, like others, will reimburse the discount that dealers are offering. 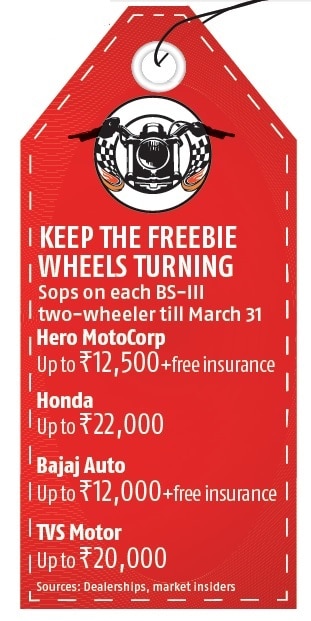 Companies have conveyed to dealers that they will offer support if any of the latter is left with unsold BS-III stocks on April 1. Bajaj Auto, in a letter to its dealers, said the manner of ‘such support would be communicated’.


A Yamaha two-wheeler dealer said it was giving a discount of around Rs 10,000 for some of its models.


While passing its order, the court had said any BS-III vehicle sold by March 31 would be permitted for registration even in April on giving proof of the purchase date. However, only BS-IV vehicles can be sold from April.


An Ashok Leyland spokesperson said, “Our products are in good demand. We will not be offering any price discount. To date, we have sold about 50,000 BS-IV vehicles to customers, who have access to BS-IV fuel.”


John K Paul, president of the Federation of Automobile Dealers Association (FADA), said the stocks with dealers could not be sold even with discounts within the limited period. The dealers may face a challenge if the manufacturers do not take back the stocks after April 1.


“We will sit with Siam (Society of Indian Automobile Manufacturers) and discuss the issues,” he said. The FADA has around 4,000 members, which own around 11,000 dealer units in the country.


Commercial vehicle makers, which are also hit by Wednesday’s order, are silent on discounts. “The sales and marketing teams are out in the market to close deals. Whatever is the need of the hour will be done,” said Vinod Agarwwal, managing director and chief executive officer at Volvo Eicher Commercial Vehicles.


A transporter said heavy commercial vehicle majors had been offering discounts in the range of Rs 3-4 lakh for the past few weeks and these were to continue. Mahindra & Mahindra (M&M) dealers said they were open till 1 am on March 31, and were witnessing reasonable traction for the light commercial vehicle segment. Discounts in the range of Rs 20,000 and above are being worked out. There’s no company level discount from M&M. The discounts are varying from market to market.


With inputs from Sohini Das in Ahmedabad