The year has ended with just that chink of light for the automobile companies. Sales are beginning to pick up again after a long time. You can, therefore, bet that car and bike makers will unveil some nifty products in the new year. The author offers a sneak peak at what 2015 has to offer so that you can start making plans to bring home the car or bike of your choice. Crossovers, sedans, sports bikes and SUVs, these are the new-generation vehicles that should please both your aesthetic sense as well as your driving instincts

Land Rover's Freelander will be replaced by a new Discovery range, the Discovery Sport, in the coming year. It is bigger, bolder and even more practical than the Freelander as it is a seven-seater vehicle. The third row should prove ideal for children. The middle row will be flexible as the seats can be moved forward or back to increase legroom. It will be powered by the SD4 2.2-litre diesel and will also sport a six-speed manual transmission system.
EStimated price: Rs 40-60 lakh 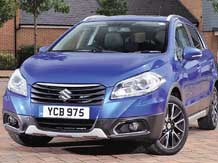 It's been a long time coming and Maruti Suzuki's crossover car will finally make its presence felt in 2015. Based on the European SX4, the SX4 S-Cross is spacious and will compete with the likes of Nissan's Terrano compact SUV. It will have a high ground clearance like most of the crossovers in the segment. Though in Europe, it comes with a 1.6-litre diesel engine, chances are it might get the more powerful 1.3-litre engine in India like the one in the Duster. The quirky design may also go in its favour in the car market, but the price range remains a mystery. As already reported, this car will not be in the Ford EcoSport range, but a step higher.
Estimated price: Rs 10-14 lakh. Ford's new SUV, a revamped Endeavour, comes with an imposing large chrome hexagonal front grille, new LED daytime running lights and front and rear underbody protection. Ford claims a ground clearance of 225 mm and water-wading capability of 800 mm. The cabin has been greatly spruced up and it will now come equipped with SYNC 2 multimedia system with voice command, automatic climate control and a new 8-inch touch screen system with colour-coded corners. The SUV will be available in two engine options: a 3-litre diesel and a 2.2-litre petrol engines.
Estimated price: Rs 25 lakh 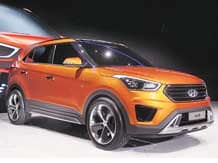 The Hyundai ix25 is the most anticipated compact SUV for the year, and going by its looks it is quite a stunner. Based on Elite i20's platform, the ix25's wheelbase is extended by 20 mm to 2,590 mm. It looks radical and will definitely find a lot of takers. It will be sharing the same powertrain that the Verna employs. With both 1.6-litre petrol and diesel engines, it will be the most powerful crossover in its segment. Expect the ix25 to be fully loaded with all comfort and safety options that the market can offer.
Estimated price: Rs 10-13 lakh

This radical looking sedan from the German car maker will become the entry-level sedan for Mercedes-Benz and will take on Audi A3 for a place in the sales list. It will be powered by the same petrol and diesel engines available in A and B-Class sedans and it comes with seven-speed dual clutch gearbox. The interiors will be sporty like in the A-Class, but it will have a lot more features and other equipment.
Estimated price: Rs 25-30 lakh Audi's three-row, full-sized SUV will drop 325 kg in weight due to a slight reduction in size, mainly because the body will be built from high-strength steel and aluminum. The Q7 will be available with a 3.0-litre V6 supercharged petrol engine and a 3.0-litre V6 turbocharged diesel powerhouse that apparently has a 26 per cent higher fuel efficiency. All variants will be mated with an eight-speed automatic transmission. With a kerb weight of 1,995 kg (as 3.0 TDI), the new Audi Q7 will be the lightest in its class. The Q7·s low centre of gravity makes it extremely agile, but at the same time, it is the most spacious car in its segment.
Estimated price: Rs 60-80 lakh In Brazil, Ford's big hatchback, the Figo, is called Ka and its sedan version is known as the Ka+. So going by this, the Figo+, which was showcased in last year's Auto Expo, will make its debut in the coming year in the under-4-metre compact sedan category. The Figo+ follows the American car company's 'Kinetic' design theory and has a nose tha is similar to the current Fiesta's. The compact sedan will be powered both diesel and petrol engines. It will have a 1.5-litre diesel engine, though the jury is still out on whether it will get the 1-litre EcoBoost or the regular 1.5-litre petrol engine. What I am sure of is that being a Ford car, it will be driver-oriented and will have brilliant handling qualities.
Estimated price: Rs 5.5-8 lakh

Honda Motorcycle and Scooter India Private Limited (HMSI) has confirmed that it will start production of its high-end sports motorcycle, CBR-650, for India. This sporty motorcycle has clip-on handlebars and a low centre of gravity for excellent riding experience. The CBR 650F is powered by a 649 cc, liquid-cooled, 16-valve, inline-four engine and falls under the middle weight sports bike category. It is equipped with 6-speed transmission and is perfectly complemented by 87 bhp of maximum power with 63 Nm of peak torque. It will also have the anti-lock braking system as a safety feature.
Estimated price: Under Rs 10 lakh

The Kawasaki H2's 998 cc supercharged engine produces a massive 200 ps of power at 11,000 rpm and torque of 113.5 Nm at 10,500 rpm. To facilitate smooth, quick shifting, the H2 uses a motorsport-derived dog-ring type transmission. Unlike a standard motorcycle gearbox in which the shift forks slide the gears into position, with dog-ring transmission, the gears all stay in place. Only the dog rings move, sliding into position to engage the desired cog. A quick shifter (a first for a Kawasaki motorcycle) is also fitted as standard. The Ninja H2 is expected to head to Indian shores by March 2015.
Estimated price: Rs 25-30 lakh