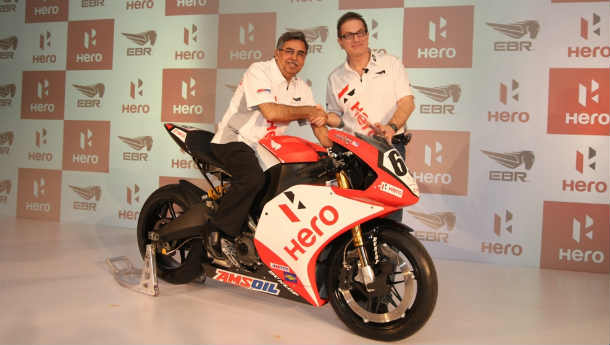 No one saw this one coming! Hero MotoCorp announced their alliance with Erik Buell Racing, USA today for sourcing technology and design know-how for future products. Erik Buell Racing was founded in 2009 by owner Erik Buell after his erstwhile company Buell Motorcycles was shut down by parent company Harley-Davidson. Eric Buell is a well-respected figure in the industry and is a designer, racer, engineer and company chairman all rolled into one.

"As part of the partnership, (Hero) will receive support in terms of cutting-edge technology and design to develop future models from EBR," the company said in a statement. After their split with Honda, Hero Moto Corp has been scouting for a technology partner and has finally found EBR as a good match. Erik Buell, founder of Buell Motorcycles and Erik Buell Racing, has a very unique vision when it comes to creating motorcycles and his innovation has always been a key factor in producing fast, agile motorcycles using Harley-Davidson V-Twins as a power source.

Eric Buell Racing currently has a cutting-edge, low-volume motorcycle called the 1190RS in production and it’s quite a fantastic motorcycle used primarily for racing, an evolution of the former Buell 1125R. Hero says that they won’t be launching a big-displacement bike right away and that the sourced know-how will first be deployed onto bikes with smaller cubic capacities. Buell’s website already lists three new upcoming motorcycles – the RX, SX and the AX.

Erik Buell pioneered many of the design and engineering techniques used in the motorcycle world today. His Buell Motorcycles line-up pioneered underslung exhausts that saved space mounted under the engine, a frame that carries fuel, rim-mounted disc brakes and a swingarm that holds the engine oil. A motorcyclist at heart, we trust that Erik Buell’s knowhow will lead to some awesome motorcycles in the near future. The first product is expected in the market by 2013.