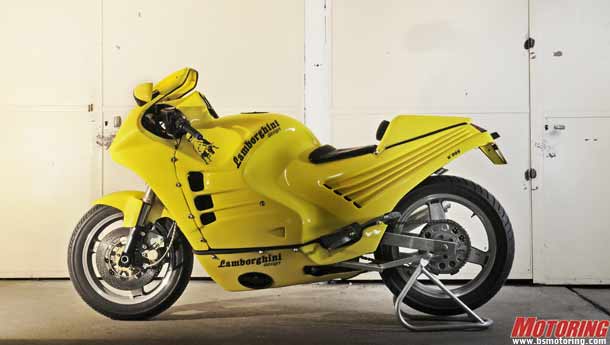 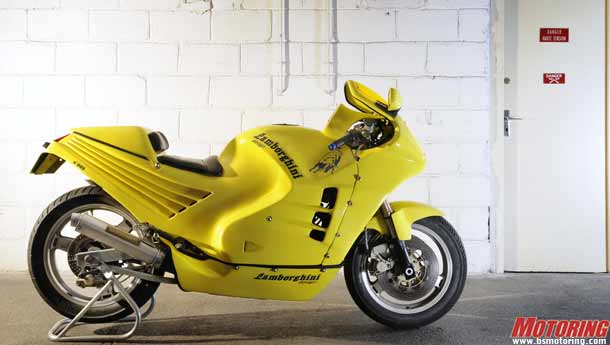 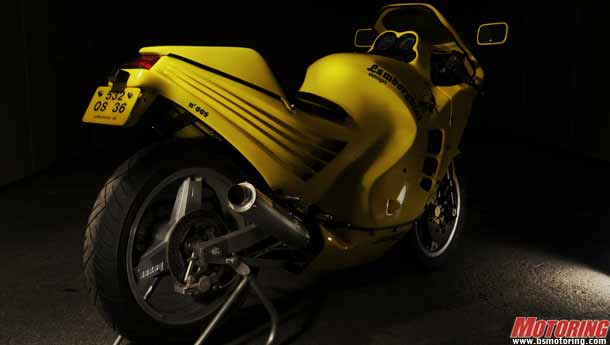 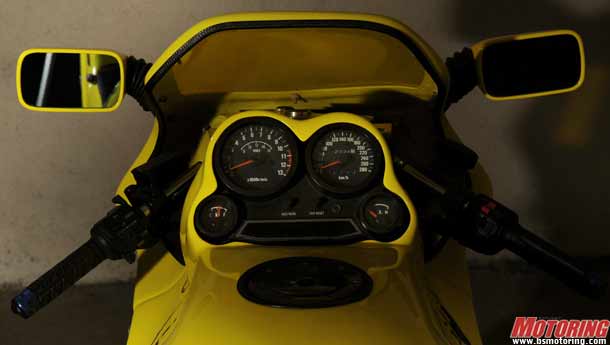 I must admit that as a child, I was a car lover. And then one fine day in 1987 at a local fair, a friend of my parents showed it to us – a motorcycle with a proud and muscular Italian bull, with the words Lamborghini Design running over the tank. I didn’t know it then, but I was staring at one of the rarest bikes in the world.

The Boxer-Lamborghini-Design motorcycle was designed by Thierry Henriette, founder of Boxer-Design. But is this bike a real Lamborghini? Or is it just wearing some show-off stickers? Well, if I believe the manufacturer’s plate riveted to the frame and the registration card, she is an official Lamborghini product! How?

Well, in the early 1980s, Lamborghini was ear-deep in financial difficulties. Ferruccio had long retired and the company had already gone through several hands before ending up with two French entrepreneurs, brothers Jean-Claude and Patrick Mimran. It is within this context in 1986, that Thierry Henriette received the permission to make a Lamborghini motorcycle. The one and only condition imposed by the Italian marque was that he could not use the name Lamborghini alone, but should include  the word ‘design’ – a very fashionable word in the mid 80s – with it.

Thus the Boxer-Lamborghini-Design was born and like its prestigious name suggests, it was a superlative motorcycle. Made around an all-aluminum chassis engineered by Fior, Fournales rear suspension, Brembo Gold Series brakes, Ceriani adjustable front fork, custom-made Gotti wheels and a wind tunnel-tested fully enclosed fairing, the motorcycle was a race track beast wearing a haute-couture evening dress. Ironically, the 900cc and 1000cc motors were Kawasaki units. In 1986, the Boxer-Lamborghini-Design outperformed all of its rivals. It was much lighter, agile and powerful and with 125 bhp propelling 185 kg, it was easily capable of a 250 kph top whack. To put things into perspective, average sportsbike riders had to wait until 1993 and the Honda CBR900RR to see a street-legal machine go below the 200 kg mark.

Mohamed Lamraoui (Momo, to friends) is a hardcore rider. He happens to work for international level competition teams such as MV Agusta in World Superbike and welcomes me into his ‘office’ in order to have a chat about his Boxer-Lamborghini. Walking in, I see him sitting at his desk – a race-spec Ducati 999 – and he beckons me to sit opposite to him on the guest chair, a 1957 moped. On my right, sandwiched between a 1983 Honda 125 XLS and a Ducati 600 SS, is the beautiful Boxer-Lamborghini

TV: When did you buy your Lamborghini bike?

TV: At the time there were several other famous brands in motorcycle craftsmanship, like Godier-Genoud or Martin. So why a Boxer? That was an all-new name...

Momo: Well, in 1986, I actually went to the Paris Motorcycle Show in order to see a Godier-Genoud motorcycle, the model’s name was Carte Noire (Black Card). But after a long night of work, I had little time to freshen up (I was a truck driver back then), so I wasn’t really squeaky clean. When I stepped in the Godier-Genoud space and asked the representative about the Carte Noire, the guy looked at me and said, ‘Sir, do you think you have enough money to afford and maintain such a vehicle?’ I can tell you that the buying process stopped right there!

But just a few yards away was the Lamborghini bike. Thierry Henriette was there and he gave me a very warm welcome, so it was naturally with him that I signed a purchase order. I did not take the Lamborghini immediately because it was an expensive bike and I did not have enough money in my account (the price was the equivalent of about ` 15 lakh). But as soon as I managed to raise the money, I immediately called Henriette, went to Toulouse and rode home my 900!

TV: Back in 1987, your bike was not yet worthy of a museum stand. So in 1987, in a motorcycle world inhabited by a majority of Japanese bikes, what was it like to ride a Boxer-Lamborghini?

Momo: Wow! It was really something! But people would always think that I was rich, which was not true. I was just dedicating all my earnings to my passion. People would often stare at me or come and talk to me when I stopped, asking me if it really was a Lamborghini. About riding itself, the technology level was so high compared to my buddies’ bikes. It was at another level altogether.

By listening to Momo’s comments, it seems that just like the Lamborghini Countach in its time, Thierry Henriette’s creation was a truly exceptional machine. Besides, this motorcycle has now become so rare that information on the internet is almost non-existent. So I went to Toulouse and headed straight to the Boxer-Design’s office to meet Thierry Henriette – founder of the company, automotive design master and father of the only two-wheeled Lamborghini ever. As Boxer-Design’s mastermind, he is permanently immersed in the future. But today, Henriette has to tell me about a time when a mobile phone wouldn’t fit in a suitcase and the closest thing to an iPad was a slate and a piece of chalk.

TV: Welcome back to 1986, Mr Henriette. The Boxer-Lamborghini-Design was your third creation and it was radically different from your two previous ones. Tell me about the genesis of the bike.

TH: The bike had to look as futuristic as possible because of our association with Lamborghini on this project. Thus, we were working on fully closed designs, something looking more like a sportscar’s bodywork than a motorbike. For this reason, we chose a full fairing. We exchanged a lot with Lamborghini, we kept sending them pictures and then the Mimran Group (owners of Lamborghini at the time) really liked this version and gave us their approval.

TV: Some elements of this design, especially the scoops, remind me more about a Ferrari Testarossa than a Lamborghini...

TH: True. The resemblance was closer to a Ferrari Testarossa, especially for the rear, which was perhaps a mistake. But back then, we were already very happy to be able to use that prestigious name. It is written on the bike’s registration card, you know. I am proud of that.

TV: So why Lamborghini? Why not a Ferrari or a Porsche motorcycle?

TH: Because at that time, we had been able to make agreements with them. In fact, Lamborghini was owned by cousins of my family, so you can imagine how much easier it was to get permission from them than from Ferrari. But later on, when they sold the brand to Chrysler, we immediately got a call from some American lawyers, asking us to stop using the Lamborghini name.

TV: I find this bike a little paradoxical, she wears a haute-couture dress and a prestigious name, but is powered by a popular heart – a Japanese four-cylinder engine.

TH: Yes, it was the engine of the 900 Ninja, some were later made with the 1000cc motor from the RX. Back then, both were very good engines as were all Japanese engines. But to us, the Kawasaki ones were the best ones to run such a project.

TV: And it did not bother anyone at Lamborghini that a motorcycle bearing their name was powered by a Japanese engine?

TH: No, no, not at all. Again, it was very simple – the Lamborghini people and the Mimran brothers were quite impressed by the style and that was the most important thing to them.

TV: Let’s go back to the world of supercars. So far, your bike is the only one to officially carry such a legendary name from the car world. Why is that? Do you think motorcycles and cars are an impossible love story?

TH: No, I think that if Ferrari make bikes, they would sell. If a limited edition of 1000 Ferrari motorcycles is announced, I am sure that many Ferrari owners would be ready to buy one, even those who may not have a motorcycle riding license. If you go to see a manufacturer and offer him a motorcycle project with a high-tech carbon chassis, something that really stands out, I don’t see why they would reject a partnership.

TV: How many Boxer-Lamborghini-Design were produced and how many of them still exist?

TH: Wow, that’s hard to say! Forty, at most. Perhaps even less than that. I believe that most bikes are not running and are in private garages and collections. We do have archives from the beginning, but with time, most have changed hands and we don’t have any track of that.

Today’s motorcycle-fashion leaders do not give much to science fiction. On the contrary, they tend to revisit ancient episodes of motorcycling’s heroic mythology. There have never been as many independent bike builders as there are today. But unlike today’s handcrafted bikes, his Lamborghini was not a tribute or a reinterpretation of the past. It was almost science fiction, already a vision of the future.