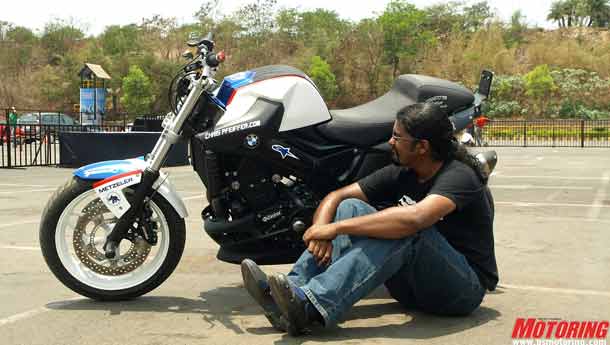 Been a long time, hasn't it? No reason for not putting fingers to keyboard - just plain laziness, though I prefer the term 'writer's block.' Also, I thought I'd run out of things to say and become a mite repetitive. Nothing's changed. So, here we go again.

Just last week, I met Chris Pfeiffer. And I'm inspired. It's not the temporary sort of inspiration, either. Watching Pfeiffer in real life has stoked the sleeping embers in my head into a raging fire. I really do want to get back to the two-wheeled lunacy that I used to indulge in (with mixed results, of course). This was a time when Indian stunting scene was in its nascent stage (today, Indian stunters are really, really good!). My bike was everything to me, K&N, giant sprocket and all. Some seriously demented gearing gave it a top whack of around 70 kph, but it used to rear its head with more spunk than a wild mustang. Endless wheelies were possible in second gear and it even came up in third! Hours were spent trying to get higher and go farther on one wheel than ever before. I've never come across a sensation anywhere close to that of pulling a satisfying wheelie.

However, it was painful to see all the paint and chrome, that I so lovingly polished for hours on end, being scarred for life by the inevitable pull of gravity that stunters are all too familiar with. So, I gave up, choosing to go on rides instead of practicing wheelies. I didn't really have the money to replace broken parts during college days, you see. Later, I sold my bike too. Needless to say, I've been heartbroken about that bike and what I could've done on it. We were really good together, you know. Thankfully, in a display of uncharacteristic foresight, I sold it to a chap who lives close by so that I could buy it back without having to painfully track it down. It's enabled me to check on the bike as often as I can and the motor still sounds as solid as ever. Now, the time has come for me to ask the chap if he's willing to sell it to me. Pleads, threats and suchlike are being invented with surprising efficiency. After all, it's not every day that Chris Pfieffer's bike reminds you of your own little stunt monger, no?