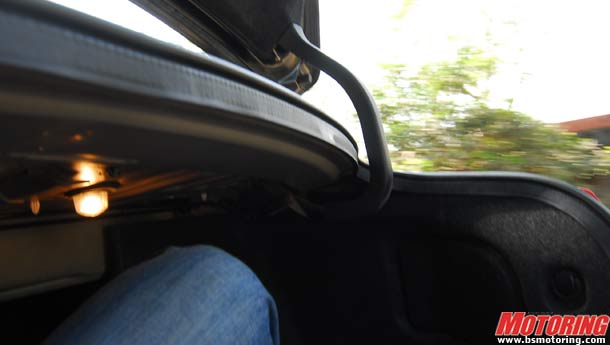 Strange realizations hit you on long motorcycle rides – realizations such as the fact that automotive photographers spend some of the longest time in the boots of various cars, a record broken only by frequently kidnapped diamond traders from Surat, spare weight-saving tyres and jacks…as in the metal ones. Because, dear reader, all those nice driving shots you see in the magazine with the insanely blurry backgrounds are all taken from the boot of a car, on the go. We know more about the boot space than that merchant of bling from Surat or any road-tester for that matter because a) we frequently switch sides on the go to avoid dirty backgrounds, of which there are a lot of in India and b) the diamond merchant is usually mummified from head to toe in duct tape.

I know for a fact that that the Kizashi’s boot aperture size is weirdly small and it’s bad for thugs because getting a body in, especially a fat, nicely-fed one is difficult. The Alto K10s boot is so small even after you disconnect the speakers and various other random bits lying around, it will be only advisable to undertake kid-nappings in it. In the Nano, er, there’s no boot so you’re better off doing a Baby’s Day Out-inspired evil exploit. At the other end of the spectrum, the new Porsche Cayenne is a baby to do tracking shots from – it glides like an Albatross by the sea, the space is generous, to put it mildly and of course, there’s the electronically assisted boot lid closing feature, a boon for the inherently lazy. Tracking from the Volkswagen Jetta TDI is like putting your nose in the tailpipe of a running truck. In one half-an-hour or so photography session, it managed to coat my lungs with a matt black layer of carbon-based particles so thick, it made them invisible to everything including an X-ray machine, as my puzzled doctor found out later.

And as for the Toyota Innova’s boot, you might have heard that the ride is good and it’s a good tracking car but let me clear this once and for all – it’s a filthy place to be in because most Innovas are of the yellow-plate variety and no one gives a damn, your point-of-view of the target vehicle is sort-of bleh and there’s almost nothing to hold on to, so when your sleepy driver decides to go off into that hedge or slams the brakes because he’s seeing flying Unicorns crossing the road (not the bike!), you’ll probably end up as a rather large hood ornament onto that spanking new car. So, there, I’ll either have a Range Rover or a S-Klasse to do my tracking shots, thank you very much.

(This will have a follow-up coming soon. There’s simply too much to talk about in one blog)