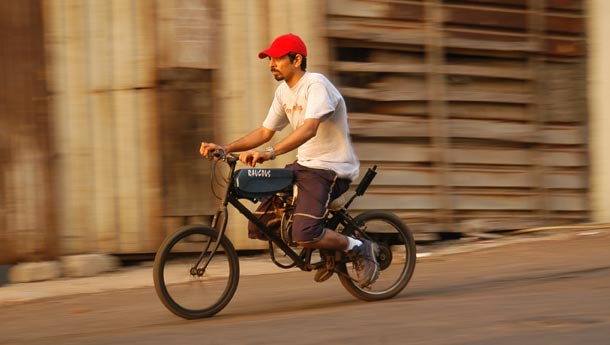 We've ridden bikes – small, big, fast and even some hideous – but this one's completely insane, yet amazing fun. Here's the recipe for this joyride – one BMX bicycle (tactfully mooched from a younger sibling), one small two-stroke engine, a hands-on approach and suicidal tendencies. The backyard build of Mumbai-based Ronit Kanuga and Warner Rebello, the Raucous as it is called, fits the bill – rowdy and loud and how!

The engine is basically a 35cc Ralli engine, a small two-stroker that's used for agricultural purposes which Kanuga sourced from an acquaintance. The tank and expansion are Rebello's contribution, which he built while attending a mechanic's course. With 1.1 bhp on tap and the little BMX weighing in at about 20 kg, it makes the Raucous great fun to ride.

With its push to start mechanism and lazy throttle response, this little machine was tedious on an incline, but then when was the last time you saw a bicycle climb a slope effortlessly?

Braking was, um... absent with me doing an Action shoe encore to bring the contraption to a halt. Ride quality was terrible thanks to a pillow which served as a seat (though Rebello blamed it on the bicycle brakes and an errant car). Brakes, what brakes? The rigid suspension didn't help my cause either, but at least I got to experience firsthand what motorised cycles at the beginning of last century rode like. And some people say kids these days lack enthusiasm. Beat that then!