BMW X6 40d will bring in the wild in you 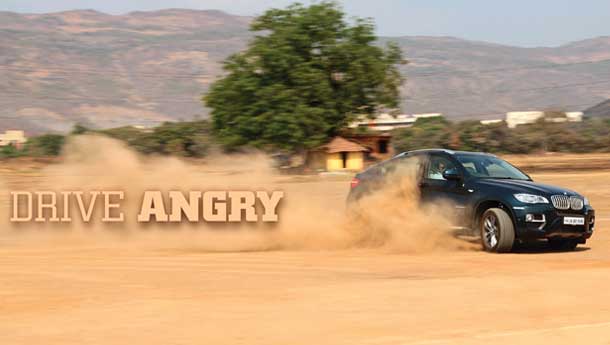 So, you liked Pablo’s review of that incredible red German SUV? Yes, the one that’s equipped with a fire-breathing, 420 bhp, V8 petrol engine. The badge on the car is a legendary representation of speed, heritage, desirability and reliability. And you would imagine a car of that size to be totally impractical and slow, but in fact, it gets from standstill to a 100 kph in just 6.3 seconds while still ferrying three other slightly queasy occupants. At that rate of acceleration, however, it does guzzle a lot of petrol. Which is why, ladies and gentlemen, I’d like you to take a look at this, the BMW X6 xDrive40d.

Yes, that’s a confusing mix of upper/lower cases, but this car does the 0-100 kph run in – wait for it – 6.14 seconds! While sipping on diesel and returning 7 kpl! Now, in a typical road test story, I would have begun the article with an embarrassing story about life back in school, eventually moving on to the car’s looks, interiors, number of computers and so on. But this new X6 is, in my opinion, an absolute driver’s car. And driving enthusiasts like to be told about numbers. So I will.

Under the hood of the X6 is a twin-turbo (yes, two proper turbochargers), 2993cc straight-six, that produces 301.7 bhp at 4400 rpm and 61.1(!) kgm of torque between 1500-2500 rpm. That is, as you can probably tell, a rather large resource of propulsion. But you haven’t heard the half of it yet. The X6 40d is equipped with an 8-speed automatic transmission and thanks to an ‘intelligent 4WD with variable torque split’, you can now choose on the iDrive interface, apart from whom to call and the amount of bass in the speakers, the proportion of torque you’d like to assign each of the wheels. And you thought this was just another diesel SUV.

I’ll be honest – this is not a car you get into, start, and drive from points A to B. Instead, you get in, plug some angry electronic music into the USB slot, select sport mode, and thereafter, stick the front end inches behind whichever car is ahead of you, and flash your headlights menacingly. Barely will the car ahead begin drifting into the slower lane than you will literally smash the accelerator pedal to the last bit of carpeting and, with the integrity of your neck at stake, speed away that much closer to the horizon. That is, seriously, the only way I could get myself to drive the X6 40d.

And it’s not all menacing-this, and lunatic-that. At one hundred and twenty kph, with the dubstep music turned off, I was actually able to exchange a proper conversation with Aditya by the means of a whisper. This was, of course, our feeble attempt at investigative journalism and you shouldn’t read much into our whisperings. For a large, powerful diesel, it is really rather quiet in the typically BMW cabin. Yes, the interiors aren’t particularly special, but everything in there is of supremely good quality and feels upmarket and well-designed, if not ludicrously so. Eight quick gearshifts later, I was cruising at unprintable triple digit speeds, with the tacho needle barely showing any signs of life. I was comfortable, snug, and despite very good levels of isolation from road and environmental noise, I was in healthy contact with the feel of motoring. The steering – slightly ‘digital’ at low speeds – tightens up admirably as the speeds increase and that, invariably, urged me to drive more aggressively.

Good. Because that gave me a chance to experience the X6’s brilliant cornering ability. Yes, you do experience a bit of body roll under hard cornering but you don’t necessarily ‘suffer’ from it. Even at considerably high speeds the X6 holds an almost unbelievably clean line through corners, without once hinting at understeer. The suspension, while being decently plush over bad roads, firms up suitably to match the car’s agility as the speeds rise. Overall grip is truly fantastic for a car that changes direction with the same willingness as smaller, sportier BMWs and the brakes, too, are spot on.

However, despite being so likeable, the X6 isn’t perfect. Yes, there is an individual screen and air-con controls for the rear row, but the sloping roof, massive pillars, and huge front-seat backrests can be a little too much isolation for some. Or, you could interpret that as the X6’s ability to ferry its celebrity passengers without allowing the paparazzi to get a glimpse of them. Or, more simply, you could slip into the driver’s seat, which is where the fun really is.

Contrary to what you might perceive of the X6, it is actually a very practical car. The boot, for instance, is massive. It can seat four in comfort, depending on how immune they are to claustrophobia. And that diesel motor can deliver anything between 7 and 11 kpl, depending on how aggressive you’re feeling at that moment. Most importantly, the X6 has always been a poser car, which it still is, but it now comes with a fantastic blend of performance and economy. See you at the racetrack, then, Pablo.