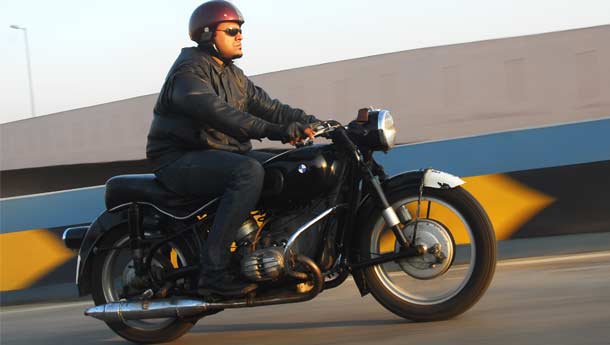 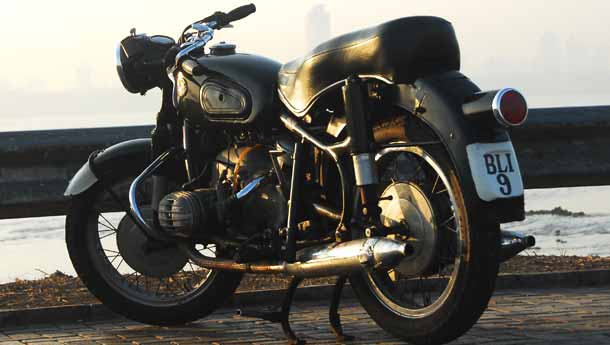 Go on, stare. Take it all in. Yes, it looks as svelte and graceful as a 100-stone lady doing a ballet routine. In black leotards. But there’s something about those lines that you can’t just get enough of.  What stands before you, dear reader, is the BMW R50, which rolled off the Munich production line in 1955. And the colour you see on the motorcycle is ‘Avus black’ – the very same coat of paint that was applied on the bike before it left the plant. We have featured some very fine classic bikes in the past, but an oldie with its original 54-year old paint still intact? Er, I don’t think so.
In those days, you could order your Beemer in any colour that was currently being used on the Bavarian manufacturer’s cars. Interestingly, the Dover White shade was an exception to this. Apparently, an American importer of the German motorcycles took such a strong liking to the off-white colour of his 1942 Packard, that he sent BMW a can containing paint of the same shade. BMW duplicated it and sent back 50 motorcycles to him in that very same colour. This is how BMWs got around to being sold in that particular off-white shade. Now that we have scratched the surface, let’s get to the motorcycle, shall we?

BMW built its first boxer engine back in 1920 and ever since then, the format has been as synonymous with the manufacturer as V-twins are to Harley Davidson. The 500cc R50 was introduced in 1955, along with the more powerful R69 that displaced 100cc more. The production run of the R50 lasted for merely five years and in 1960, it was replaced by the R50/2. End of a legend, then? Hardly! Picture two large pistons crashing alternatively into the same axis as your crotch. Turn-on? Hell yeah! The half-litre ‘boxer’ engine actually causes the bike to rock slightly from side to side at idle, while the horizontally opposed reciprocating pistons convert the force exerted by the burning gases into pure mechanical torque. Wring the throttle with your right hand and the pair of Bing carburettors begin to dump their volatile contents into the cylinders with increased urgency. As the revs build up, the little twitches disappear and the engine note turns from a gallop to a muted roar. With a whole 26 horses waiting to break loose, the boxer-twin is pretty free revving and mechanical clatter is almost non-existent. The R50 likes to make its presence heard, but isn’t the sort to beat on a tin drum to get your attention.

Pop in the clutch, engage the first cog in the constant mesh five-speed gearbox and you’re ready to roll. The bike jerks forward, and then catches its breath, accelerating in a relatively linear manner. The surge isn’t anything like being shot out of a cannon. It’s more like a squirt out of a water pistol, with a deep boom rather than a fizzle as the accompanying soundtrack. But the R50 just keeps going, the needle on the speedo rising steadily till I’m wondering whether those drum brakes will keep me from ploughing through some unfortunate soul’s boot, or worse. I definitely am not the gambling type and let off the throttle in good measure. I did get on the brakes hard once, though. Some slug in a rickshaw, draped in a shirt that would make even Dennis Rodman run for cover, thought he’d catch a better glimpse of the Beemer if he manoeuvred his three-wheeler onto the bike. I panic braked but the R50 was composed and slowed down without much protest – those huge drums do work pretty darn well. Do you ride a rickshaw or do you drive a rickshaw? From the looks of it, ‘you survive a rickshaw’ is most apt.

BMWs are all about reliability. And the R50 is no different. Compare the mere droplet of an oil leak on the boxer to the Exxon Valdez-like oil slick on any given British twin, and you will realise that the R50 is as well made as it is ungainly looking. But who cares about looks when it can ferry you out of the ugliest situations encountered on a long ride? Like deep potholes bang in the centre of the road.Although they invented hydraulic telescopic forks and were consequently the first manufacturer to use them on the R12 in the mid-1930s, BMW chose to equip the R50 with a front suspension setup called the ‘Earles Forks’. This system was designed by an Englishman named Ernest Earles (and hence the name) and is as simple in function as it is in appearance.

Basically a kind of leading link fork, the moveable pivot is placed behind the tyre and a pair of swing arms (one on each side) extend to the wheel hub. A couple of shock absorbers are attached between the top of the rigid tube extending down from the triple-tee and the end of the swing arm which is closest to the axle of the wheel, forming a triangle. Hard braking on a motorcycle fitted with telescopic forks causes the front end to dive downwards. With the Earles forks however, the front end will actually rise up instead. Earles forks are best suited to motorcycles attached to sidecars because
of their ability to be adjusted for rake and trail. The R50 was sold as a solo machine from the factory, but many owners lashed sidecars onto them. Keeping that in mind, the forks were fitted with two pivot points. The front point was best suited for sidecar use as it reduced trail, which permitted
the bike to turn relatively easier while attached to a rig. Fitting the swingarm on to the rear pivot increased trail and was best suited for motorcycles without the proverbial third wheel.

The rear suspension is a pair of ancient shock absorbers. Although they look nothing like the ones fitted on today’s bikes, these shocks were way ahead of their time. The spring tension can be set at two stages by a turn of a lever for single or two-up riding. And the only tools you need are your bare hands. Maybe a helpful kick is needed sometimes, but since these things are older than most people’s tooth fillings, all is forgiven. There is more to a motorcycle than merely its mechanical knick knacks – it is built to be ridden, after all. On the move, the R50 rides like a water mattress bouncing on a trampoline which is braced to a dingy, floating out at sea in a force 10 storm! Get the drift? The suspension is set up very soft and any little ridge on the road makes your insides feel like corn popping in a hot kettle. R50s weren’t meant to be hardcore sporting machines for brisk blasts around a track. They were built as long distance motorcycles instead. A harder suspension would take its toll on the rider, especially on bad roads, and so a soft wallowy setup was the only viable compromise possible.Tourers are supposed to be comfortable to ride, and the R50 certainly is just that. The wide handlebars are slung low and the seating position is a little swept back. This ensures a slightly aerodynamic riding posture that doesn’t really tie your spine into knots after hours of riding at a stretch.    Bavarian Motor Works has always been known for innovative design that is both functional as well as easy on the eyes. Sometimes, though, they do tend to forget the latter but thankfully, with the R50, the result was as good as it gets. Take the final drive, for instance. Enclosed in its own oil bath, the propeller shaft runs inside a housing that also doubles up as the right part of the rear swing arm. Besides being more reliable than the more conventional chain drive, the prop shaft demands less maintenance as there is no slack to be adjusted – just the right thing for a long distance tourer.The little tool box is another detail that is so easy to miss. Not the ones to take the easier way out by fitting a gawky tinbox at the side, BMW created a little recess on the left side of the fuel tank and covered it with the knee pad. To gain access, simply put the key into the hole at the centre of the knee rubber and the tank pad plonks open. Simple yet ingenious.

The R50 is an engineering marvel of its day. It starts every time you use that awkward ‘south paw’ kickstarter lever that swings outwards. The engine is butter smooth and is seemingly built to last forever. So then, would I say that this is the best classic bike that I have ever ridden? Certainly not. Sometimes things are less affable when they are too perfect and that certainly applies to motorcycles. The BMW is a tad too sterile for my liking. I’d definitely take a Bonnie or a Vincent any day. I like my classic machines a little temperamental. But I sure wouldn’t mind borrowing the BMW for that ride to Timbuktu.
A big thank you to Sajid for letting us take his Beemer out for a spin. He intends to restore the R50 to its former glory, including getting the bike painted. Quite frankly, we doubt whether he’s going to have much to do on the bike anyway – it’s in such good shape...And yes, the helmet used for this feature was chosen for the looks alone. Please use a proper full-face lid whenever you ride.