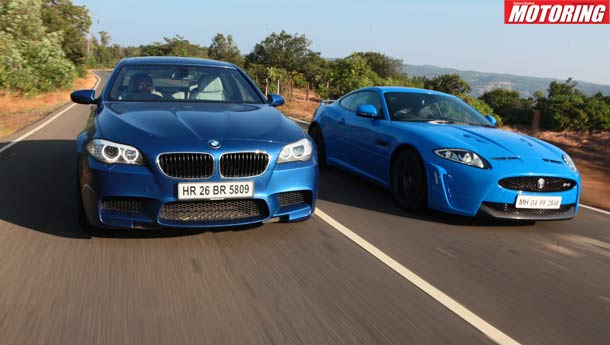 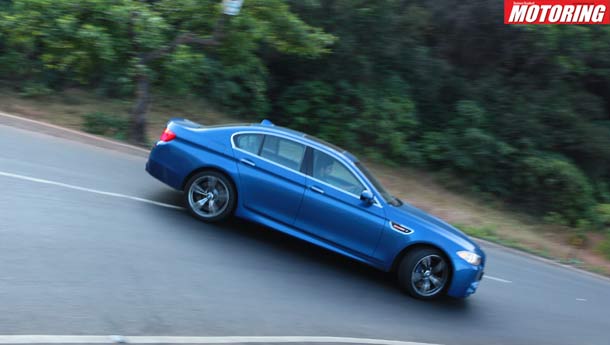 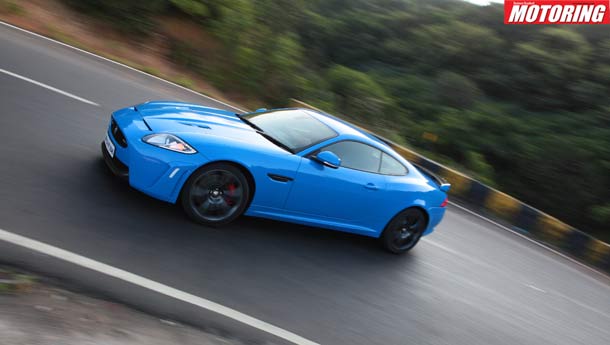 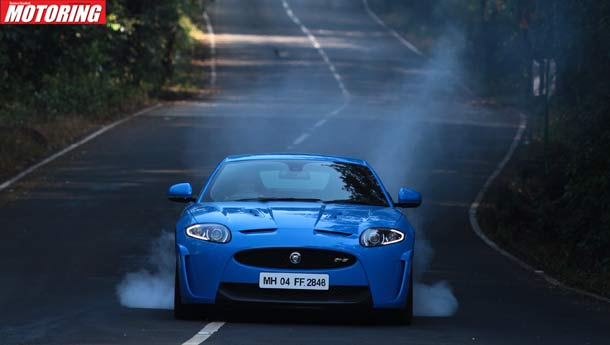 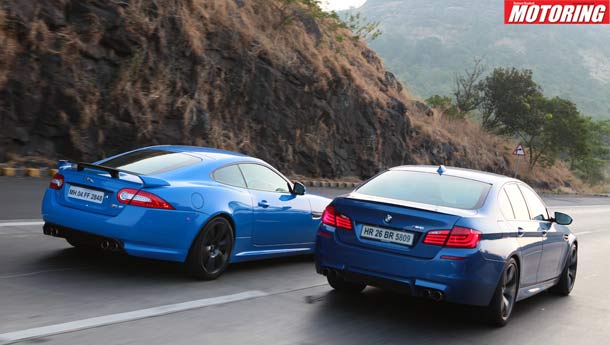 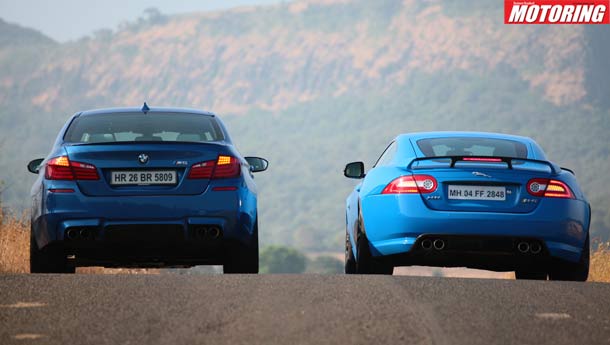 A trail of smoke, screeching rubber and a V8 barely tickling 3000 revs, but creating a sound so terrific that the entire hill station comes to a dead halt. Now multiply that by a factor of two and the strong arm of the law had to get us to vacate the place quicker than you can say 'shoot'.

Days like these don't come often. Rarer still is getting both the cars to steer the wrong way, the rear tyres squealing in protest and the nose not having a conversation with a hedge. Or a crash barrier. Or air, lots of it, 300 feet down. Add the joy of one of India's best driving roads and you know what I mean.

There's absolutely no reason to bring them together, apart from, well, the fact that they both are blue, have very similar horsepower and go about things in a very similar fashion. But they also represent the fading away of a breed of supercars, cars whose front ends would go light. Whose bodies would shimmy over bumps, with heavy clutches and gated shifters that snatched an arm and leg. Now, they are just flappy paddles, lots of settings and an ESP system that snatches away as much fun as it gives you.

It all begins early one morning – 4:30 to be precise. I am up, slightly groggy but raring to go. Forty winks and three massive yawns later, I'm refreshed by the sight of a Monte Carlo blue M5, standing in my parking lot. The previous night, I was back from sending the December issue to press, and roads so empty that there was no one to book me for those two dozen road infractions. The M5 literally pushes you into such a corner. But then again, I've spent pretty much half my life trying to figure which car I would love to have in my garage, the restriction being it's my only car. And every single time the M5, the E39 to be precise, just kept clouding my mindspace. For those who don't know what I'm raving about, the E39 made its debut in 1998, when I was somewhere in my mid-teens. Impressionable age, car emerging out of the cover of a magazine in a shade of blue-ish silver called Silverstone. Recipe for love, no?

The M5 is more than just a typical recipe. What started in 1986 was a cult that continues to this day. All because BMW made an engine and it needed to find as many engine bays to put it in as it could.

The M1, then the 6 Series (M6) and of course the 5 Series (M5). It was a business strategy that created the super saloon segment, a car that led some MPs in Britain to nearly outlaw a competitor, made by Vauxhall and tuned by Lotus with performance to shatter the M5 – the Vauxhall Omega. But the M5 has and continues to remain the weapon of choice, for good reason. Four comfy seats, a big engine, finely tuned aggregates and philosophies that have generally withstood the test of time. Until this one.

The F10M (geez, it even gets its own M designation now!) is the first one that pretty much obliterates everything the M5 stood for. Making its debut is a forced induction motor and that to M-philes is a 'jumping-off-the-Golden-Gate-Bridge' moment. The only things true to the script is the rear-wheel drive, tubeless tyre setup and an M-button on the steering. Sorry, make that two!

There's no such complication with the winged-blue coupé on its flank. The XKR-S is to the XKR what the Scuderia was to the F430, the GT3 is to the 911 Carrera and so on and so forth. Essentially a mite faster, a mite harder and several mites more expensive than the regular fare. A formula that is now also being applied to the XFR in an attempt to get the power output as close to the M5 as possible.

Yes, the M5 is from Mars and the Jag from Jupiter. And here is where this otherwise seemingly meaningless, meandering story starts to make sense. Because the two produce close to 550 horses from two very different forms of forced induction and after that, nothing is the same. Step into the M5 and the multitude of settings will leave you baffled for a while, if this is indeed your first time. Gearbox, steering, suspension, throttle... phew, there are a gazillion ways to get your knickers in a twist. Or just store your best settings in the M1 and M2 buttons and you may not need to worry about the computing nightmare. There are big supportive seats but slightly less so for the terrified occupants at the rear when you turn off the ESP button. And lots of other familiar 5 Series bits, which makes the M5, well, some sort of wolf in sheep's clothing.  The Jag is familiar territory too, with all those bits somehow finding home in many other Jags as well. But the red piping on the black seats and the general sense of cool, makes the Jag a very warm place to be in. I love the way those seats hug you into place, even though some other bits really leave something to be desired. The flourishes of chrome and those cool looking dials are somewhat American influenced. Yes and if you hate your neighbours even a smidgeon, just dump them in those rear seats. They will move out of your life for good!

With the early morning sun just about kissing the horizon, we've turned up at our favourite stretch of road for a day of crackling V8s and grip-breaking nuttiness. In the cool, late-November air the XKR-S literally sounds like the gods gargling away at full chat. There's an immediate sense of occasion with it, the big wing just about intruding into the rear-view mirror's reflection. People point fingers first, phone cameras next and then as you go down a gear, a gasp followed by a whoop, drowning in the crackle and pop of the quad exhausts. In a sense, the XKR-S is the loutish, slightly brash one of the two. The M5 sounds great too on the outside, following right up on the XKR-S, except that on the inside, carefully placed speakers accentuate the sound. An outcome of a turbocharged petrol that really isn't in the same vein as a large, high-revving M monster that we have always known M for.

But there is a reason why the M5 is revered across the world; its ability to adapt between apocalypse now and a state of Zen at the mere flick of a button. The duality of purpose in this one is even more evident. It simply starts twisting the horizon and sucking you into it like a black hole. That's also down to the flexibility of the twin-turbo 4.4-litre V8 motor, the meat of all that 69 kgm of torque making its presence felt at just 1500 rpm. It's also the first M car to sport valvetronic, doing away with those beautiful butterfly valves. All of which you suck up to when the numbers start to nudge those of established supercars. Dial in Sport, turn off the traction control, find a nice corner and plaster the image of the car onto the front spread of the story.

Then you step out and repeat the process with the XKR-S. It's such a joy to hoon in that car, words fail me. Where the BMW becomes precise and accurate with lots of 'engineered' feel as the tail steps out, the Jag's steering simply twirls into opposite lock, the tail steps out and you can hold onto your slide all day long. Find an empty parking lot and you will probably run out of rubber before you run out of time. While the BeeEm's torque does arrive much lower down, it's tricky at first to get the car to slide around bends. So a couple of tries is what it takes before your actual attempt makes you a YouTube phenomenon. With the XKR-S, it just takes one single try.

But life is more than just sliding around for the sake of becoming an Internet star. And these cars are your entry ticket into the world of supercars. The M5 is proper, precise and very much in control. Grip builds early and sometimes, it does get a bit intrusive. Nothing that switching off the ESP can't solve. That then gives you some leeway to load up the front end and let the rear break traction. This allows you to take a much tighter line and prevents understeer from becoming a kill-joy. Yet, it's so safe, so predictable in going around corners that you would like to believe that it's actually running all-wheel drive gear, when actually it's the M e-diff that's making you look like a superhero. Adjustability at the limit is simply staggering, but I just wish the steering had a more natural, predictable feel to it, rather than an implanted weighing in. At slower speeds, the near two-tonne kerb weight and those large dimensions really make the M5 feel more M7-like. But then it shrinks around you when you let your hair down and all these things kind of come to nought.

That's where the XKR-S' 200 kg weight advantage comes into play. It never feels large and that makes it ideal for these kind of roads. Go fast into a corner and the nose takes a fraction more to turn in than the M5, simply because it doesn't have the kind of electronic trickery the M5 boasts. Understeer is what Jaguar engineers have tuned it for, safer but even more of a kill-joy. Out on the faster set of corners though, the Jaguar finds masses of grip. It's only if you encounter a large enough bump that you would unsettle it enough to warrant some lightning quick reflexes to straighten it out. The M5 on the other hand uses its weight and longer wheelbase to settle down with absolute ease when the same bump arrives, with no shimmy from the steering.

For those who like their numbers, the 5.0-litre, 542 bhp supercharged XKR-S V8 rattles off the 60 kph mark in about the same time as the M5 and then stretches it to over a tenth to 100 kph (4.5 secs vs 4.65 secs), down to the supercharger kicking in and providing more shove lower down. But the M5 simply wallops the XKR-S when it comes down to passing speeds. The twin-turbos simply take over from each other to keep the shove going all the way through and that makes the available performance absolutely effortless. But these degrees are so small that it really doesn't matter. The six-speed auto on the Jag is fast enough to respond to your requests, only the downshifts taking a wee bit more out of you. Though the M5's seven-speed, twin-clutch box is so crisp and fast that it does make even some other twin-clutches irrelevant on other supercars.

At the end of the day, this is not to tell you which car is better, but how different they really are. The Jag simply is an American brute in Brit clothes. The way it goes, sounds and feels corresponds more to your carnal cravings, but in a slightly more civilised suit. The M5 is an ICBM here, inch perfect in every way it goes about its job. Yet, there's a sense of hoonery involved here too, albeit diluted to make sense to 99 per cent of the modern, performance car buying population. What these cars also represent is a change of order, a fact that going deeper into the depths to pluck out their talents isn't the equivalent of hitting the bottom of the Mariana Trench. That guts are no longer a part of fairy tales and folklore. They are, simply, a stab of the throttle away.