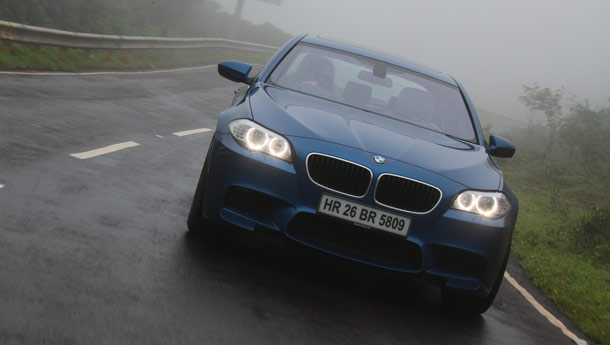 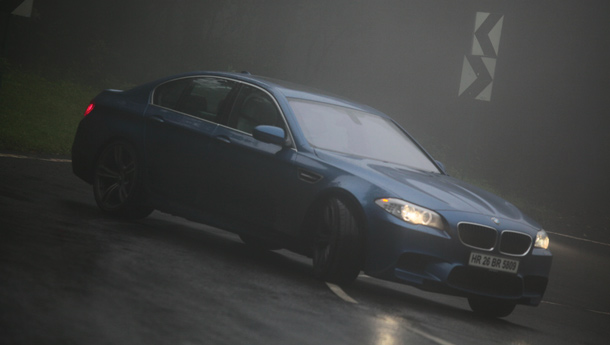 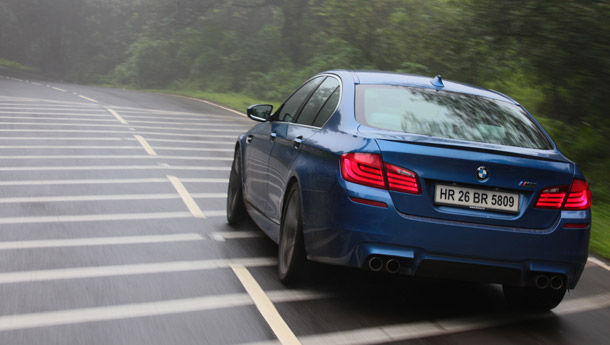 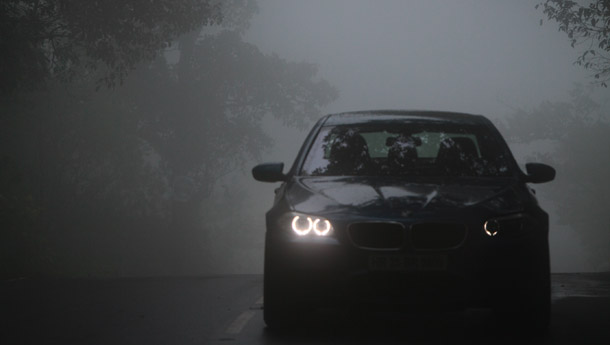 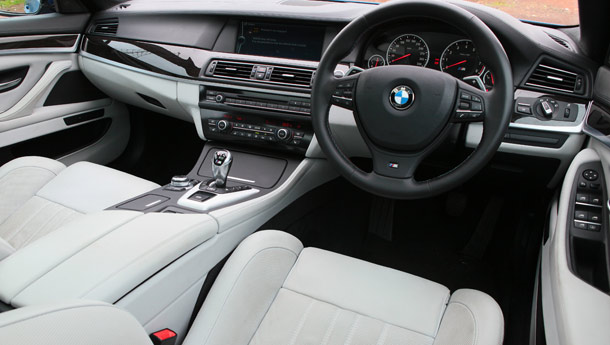 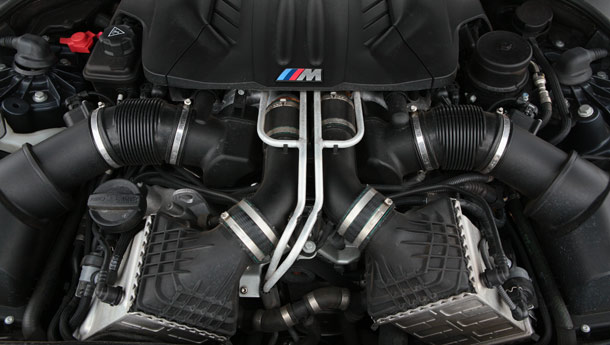 Hahahahahaha!’(breathe) ‘Hahahahahaha!’ With that, the BMW M5 passed my personal supercar test, with flying colours and with graduation hat flung into the air. Forget the numbers, the whizbang technology and the drag coefficient figures; if a supercar doesn’t make you laugh out loud, in a slightly deranged manner, then it isn’t doing what it’s primarily supposed to do – and with 552 bhp, 69.3 kgm of torque, eight cylinders laid out in Vee formation and two hulking turbochargers, the M5 is a supercar, make no mistake. The marketing spiel from Munich may toss about words like ‘family’ ‘sedan’ and ‘practical’ (more on that later), but let’s face it, anything with this much face-melting power wasn’t designed for the school run; it was dreamt up specifically to thumb its nose at exotic German and Italian artillery (throw in a few more countries if you wish), to be able to say ‘…all that, four seats and a boot too!’ followed by something that rhymes with ‘other truckers’.

So what made me guffaw in the manner described above? It was a quest, really – the quest to discover ‘how in the name of all that is holy do I engage launch control on this thing?!’ In the middle of various experiments towards this express goal, I switched off every electronic nanny, stood on the brake, gave it plenty of gas and took my foot off the stoppers. After a millisecond or so of inactivity, the rear tyres failed spectacularly in their attempt to lay down 552 horses on the tarmac, and the back end began swinging to and fro like a crazed pendulum. A two-tonne car with a rear end that’s making a break for it is not the easiest thing to control, but a lot of laughter and some opposite lock did the trick.

This kind of anti-social behaviour will almost certainly drape you around a lamp post or land you directly in jail (probably both) at some point, but it’s nice to know you can do it if you so wish. A word here about a trick that BMW has missed, by the way – engaging launch control isn’t the most intuitive process, even though that’s probably a good thing for most people. Unlike most other automobile bazookas, you don’t stomp on the brake during launch control  – with all safeties off and Drivelogic (the speed at which the transmission shifts) set at its quickest, you engage manual sport mode with the central gear selector, shift it forward and hold it until launch control shows on the dashboard, floor the gas pedal, lightly press the brake, hold the revs and then release the gear selector. At this point, even in wet conditions like I was driving in, the M5 will vaporise the 0-100 kph run in 4.7 seconds, scream through the quarter mile in 12.8 seconds and, unless you’re doing all this in the Rann of Kutch, deprive you of the right to drive on public roads. These figures are conservative – sub 4-second 0-100 kph times have been reported, making this car a true blitzkrieg meister.

The cause of all this mayhem, of course, is the massive engine (from the X5 and X6) lurking under the hood. Die-hard M5 fans may mourn the loss of the previous car’s manic V10, and I cannot comment on this matter because I haven’t driven the older car. All I can say is this – the new powerplant is a bucking fomb. With 4395cc, eight cylinders, two turbos, 552 bhp@ 6000 rpm and a locomotive-like 69.3 kgm@ 1500(!!!) rpm, how can you possibly miss?

The power output is prodigious enough, but it’s the gob-smacking torque that really defines this car’s performance; at any point in the rev range, and at any speed, all you have to do to get the party started is to dab the accelerator. The horizon-reeling ability of this car is deceptive, and it will shock you on many occasions; when you think you’re having a light stroll, a glance at the speedo will inform you that you’re on the right side of 180+ kph or more, and hitting the 305 kph top speed is purely a matter of the size of your familial treasures, rather than the car’s capabilities.

The twin turbos help to give you a kick in the pants every time you use the accelerator, and there’s no lag from them except when you floor the loud pedal from standstill. The M5’s new 7-speed dual clutch transmission is fantastic, and very quick indeed, whether you’re shifting with the flappy paddles or letting the car do the shifting for you; as with other parameters like suspension and steering settings, you can select from among three transmission settings, with the higher settings giving it correspondingly sharper response times.

The M5 is actually various cars in the same skin, because with the press of a button (two, actually – M1 and M2), the thing can go from Mother Teresa to Ozzy Osbourne in an instant. The steering-mounted buttons can be customised in a myriad of ways; for example, you can program M1 to have an Efficient throttle and engine map, suspension set to Comfort and the steering set to Efficient, all of which will result in a 552 bhp missile that behaves like a plush, standard 5 Series sedan. No, really, in this mode, the car positively caresses you and feeds you plump grapes.

Too much pampering can be boring, though, so for such eventualities, and to scare unsuspecting passengers senseless, set up M2 with Sport Plus across all parameters and the DSC turned off. I arrived at what I think is the sweet spot, with the engine/throttle on Sport, the steering on Sport Plus, the suspension on Sport and the safeties switched to M Dynamic Mode, which keeps you out of hospital, while still allowing the car to shake its booty. The ability to give you this level of customisation is probably what justifies the ‘practical family supercar’ tag, and you can actually drop the kids off at school, drive straight to the BIC, press M2 and shred your Michelin Pilot Super Sports clean off the alloys. One moment you’re in a plush, luxurious, tech-filled cabin, a hushed engine note and your offspring for company; the next instant sees you alone in the same plush cabin, only with fire coming out of the car’s nostrils and your hair being combed backwards by the sheer accelerative force.

Get this: the new M5 is a whopping 115 kg heavier than the outgoing model, yet it still goes around a set of  corners like a greyhound following a rabbit. The 19-inch Pilot Super Sports offer the levels of grip provided by chewing gum dipped in glue, and thankfully BMW has not dialled any understeer into the chassis in the effort to live up to the ‘family’ tag. Attack a series of corners and you’ll be rewarded with superb adhesion from the front, with the sensor-aided active M-differential spreading torque across the rear axle for the best possible traction. The Servotronic hydraulic steering setup is fabulously precise and direct, and it’s only 2.6 turns from lock to lock. The deal-maker is the fact that even in all-bets-are-off mode, the M5 offers a surprisingly acceptable level of ride, with your fillings never in danger of being ejected.

In many ways, this car can be said to be on the numb side of the sensory spectrum, a lamb dressed up as a barracuda, if you will. The car looks great, with a series of sharp edges, scoops and swoopy curves, and the twin tailpipes channel a very deep, sexy thrum into your ears, but the cabin blocks a lot of that out; indeed, the car plays an engine note through the audio system, to make up for that a bit. Even though performance is at the ‘Outrageous’ end of the scale, the true impact of it doesn’t quite pervade your very being; a soundtrack with more snarl in it, as well as a higher level of sensory interaction would have made the package absolutely perfect.

Oh, and will someone please explain to me who at BMW a customer has to have illicit relations with in order for a simple ‘Park’ mode or button to be provided? There isn’t one, so for some infuriating reason, you either have to shift to Neutral, switch off the engine and then press the Start/Stop button again, or switch off the engine in gear in order to engage Park mode. FTW is that about, I ask you? Still, aside from these quibbles, there is absolutely no doubt about the fact that the M5 does offer you the best of the worlds of luxury and lunacy, and it is among the most bonkers cars in existence. True, Rs 1.06 crore is a lot of money to spend on a schizophrenic four-wheeler, but the payoff is worth it – you’ll be the owner of a true automotive legend, a legend that’s admittedly become less of a sledgehammer, but which still packs an almighty punch.