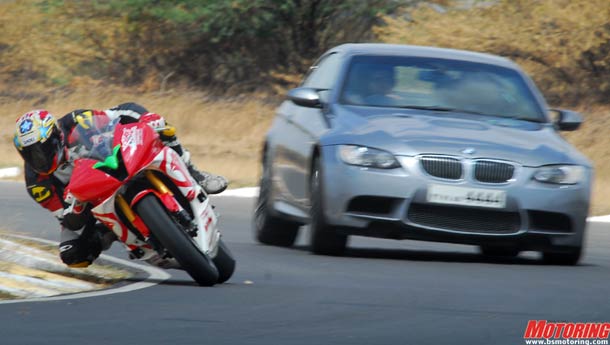 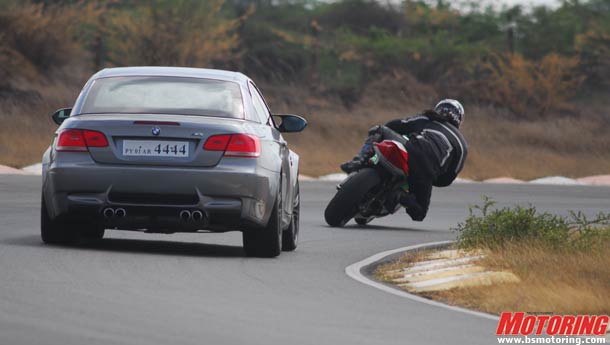 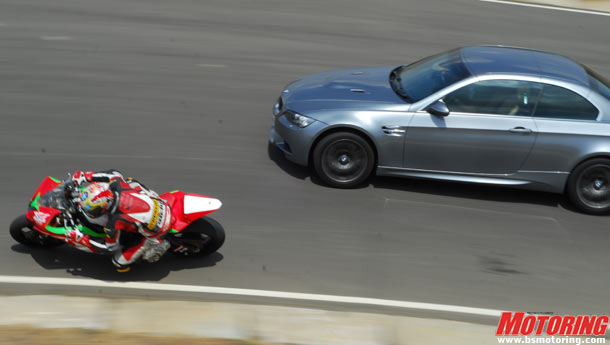 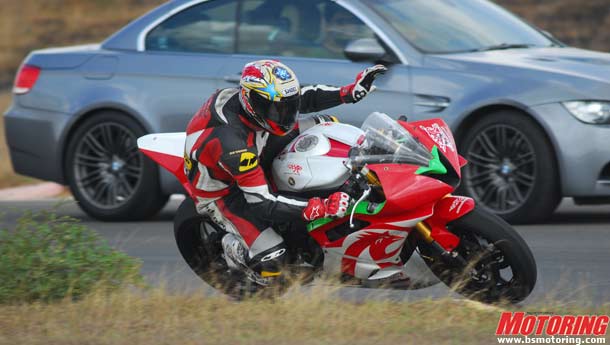 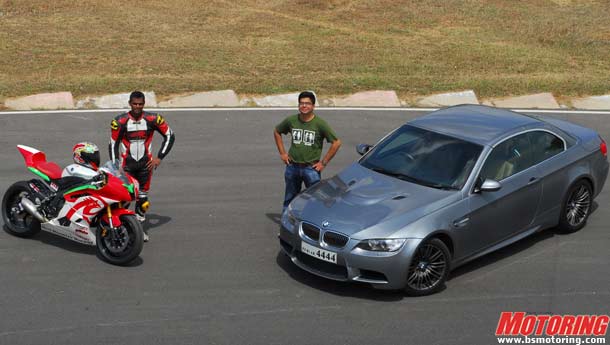 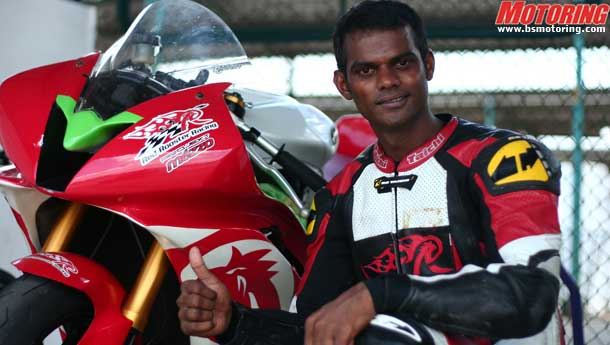 HEAT OF THE MEET
It was high time we got our hands on a proper racing motorcycle. And who better to show us how it should be ridden than K Rajini? The M3 on the other hand is one the sharpest handling BMW on sale in the country, even though this was a cabriolet. And we had a pilot, Captain Chandrashekhar to show us how to do it!

TIME
Er, sorry. Our timing equipment gave up, you see. Though Rajini laps the Chennai track in 1 min 46 sec! And from what we can guesstimate, the BMW M3 can just about slip under the two-minute mark.   KW: Oh, the R6 was fantastic! It's the fastest I've been around the Chennai track. Agreed, that the German that's lost its head is a formidable opponent, but there's no way you could keep up with a hardcore racing motorcycle. Trust me, one-wheel drive is more fun than rear-wheel drive!

RN: Sometimes, it takes a car like the M3 to turn things on their heads. Heavier than the coupe it is, but with the hard top in place it can show why it's the king of the hill. And I kid you not, the M3 was more fun around corners once the traction control was switched off and the M button engaged! No such button on your 600, sadly.

KW: It hardly feels like a 600! It makes 120 bhp at the rear wheel and weighs 160 kg – that's 750 bhp per tonne for you! And all they've done to it is install a Power Commander, a free-flow exhaust and lowered the overall gearing. And of course, it's shed weight by losing the lights, the stock fairing and other little bits all over. Bitubo suspension and racing tyres complete the package and spell doom for your autobahn stormer. You better quit while you can!   RN: The M3 has a specific output of more than 100 bhp per litre and a power-to-weight ratio of over 200 bhp per tonne. It's a car and yes, it won't have the kind of power-to-weight ratio of your bike, but if you really want to close that gap then Messrs Hamann and Dinan can help you get there! As for quitting, well the R6 tops out at 290 kph, while a de-restricted M3 also gets there.

KW: But it's how quickly you get there, isn't it? I was prepared for my best track experience ever, but the R6 still exceeded all my expectations. And if I may confess, I never took the R6 beyond 11,000 rpm, except on the straights. And it revs to 17,000! The best example of the R6's sheer speed is the way it demolishes the main straight - it's over before it begins! Just one upshift and I found myself braking for dear life. Since the R6 doesn't have a speedo, I can't be sure when exactly my self-preservation instincts kicked in, but I must've been doing 180 kph at the end. That's nothing next to the speeds Rajini was carrying into C1. That dude is really something else! Did you see the way he divebombed into corners, right at home hanging off the bike like a monkey on a branch? You might also want to keep in mind that he wasn't going at 100 per cent since this was just a demonstration. After seeing that, do you really think the M3 can live with the R6 on the track?   RN: You have to understand - a relative track newbie against a rider who can lap the track even blindfolded is an unfair comparison, isn't it? Yet, you would be surprised to know that the M3 just about kept pace with the R6 and after a couple of laps, the distance between the two around corners was close to nothing. Where the R6 was holding its line on the clean side of the track, the M3, despite taking the dirty side for photos kept up quite easily. Which goes to prove that even if you are an above average driver in an M3, you can keep up with a track pro on two wheels.

KW: As I said, he was taking it easy! Anyway, since neither of us can post race-spec lap times to save our road-biased hide, let's talk about the sensations, shall we? What about the sound? The R6's howl can give banshees a serious inferiority complex, while blowing the tinted windows of your M3 to smithereens. On the track's perfect tarmac, the R6's tyres stick like playmates on Hefner. The forward-canted position that will kill your limbs in 10 minutes on the road feels oh-so-perfect when you're braking hard for the next corner. A dab on the brakes, a quick flick and you're doing stupid lean angles - I thought I had it all worked out. And then Rajini went out and showed just what sort of lunacy is possible with a proper racing bike! Man, I wish I could ride like that. But I don't need to be a racer to tell that the R6 is more suited for this track than litre-bikes. Thanks to the revised gearing, even a mild twist of the throttle results in significant forward progress and more than enough to leave that mean-looking hunk of German metal far behind. This is a 600 that feels like a 1000 when it comes to initial acceleration, initial being a relative term here. Try 200 kph. And given enough space, this R6 will hit 290 kph. In short, you don't stand a chance.   RN: Who cares about inferiority complexes here? Once you hit that M button, the throttle gets more responsive and the traction control less intrusive to the point that it alters its character more than any Power Commander could ever do to an R6. I'm no Rajini of cars, but if Karun Chandhok were around, I'm sure this would have been an even match. Yet, the M3 is so sublime. And as you watch the lights go off on the steering when you hit the 8000 rpm redline, you realise this car doesn't have the behaviour of a typical cabriolet – in fact it's just like its coupe cousin. Armed with 420 bhp from its 4.0-litre V8 and an SMG III sequential manual, the M3 was a joy to drive around the tight sections of the C3, C4 and C5 complex. It gripped like mad, turned directions at the drop of a hat and doubled over with laughter when I couldn't induce any body roll. Where the R6 had to back off, you could just power steer the M3 into the corners. Japanese sushi from a German chef never tasted this good! And I was nowhere near exhausted!

KW: Yeah well, never mind that I nearly passed out and needed two hours to recover from the dehydration that occurred after riding the R6 for half an hour. Anyway, it wasn't the bike but the weather. I'd say that would be the only reason I'd pick the M3 – air-conditioning. Might sound insulting, but the sensation of the tarmac whizzing by mere inches from your limbs in the corner of your eye as you tilt your head to straighten the horizon is an experience that borders on the spiritual and racers like Rajini are the high priests of this religion. That sensation is something no car can ever match. Sadly, not even ones with the hallowed 'M' on them. And I'm actually sad while saying this. In any case, you should've seen it coming: 6 is twice more fun as 3!   RN: Eight is always better than four. That's the number of cylinders, my friend. I'm sure the sensation of touching the wind and feeling the dry heat on the bike would have been something else, but the M3 didn't disappoint. It gave me enough reason to appreciate and understand why the M division does what it does. I'm sad though that I can't ride any more and therefore couldn't experience the R6. But the M3 was hardly half the fun. It was just as much!