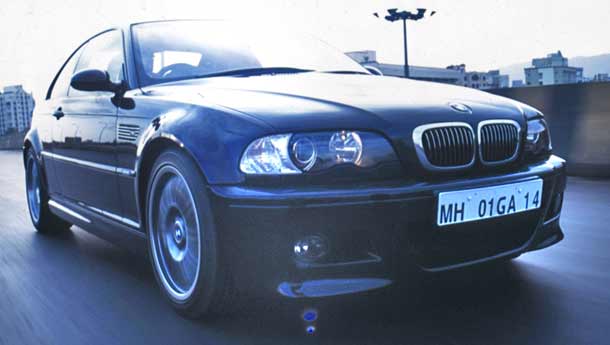 On the far side of the globe, with about 840 bhp on tap, Ralf Schumacher and Juan Pablo Montoya are piloting the most powerful F1 cars this season. At this end of the world,my fingernails have been bitten to the quick in nervous anticipation. You see, one of the most powerful cars that BSM has ever driven, anywhere in the world, is at my command now. The insane, 3 Series-based bully from Munich, the M3. All 343 mighty bhp of BMW inline 6-cylinder power. Translated, that’s about three and a half times what the Honda City 1.5 flexes, but from a package that weighs in at 1570 kg. In technical terms, that means 218 bhp per ton. Or more simply, a missile that can blast you into geostationary orbit if it didn’t have four wheels and a preference to feed on tarmac. If I was unsure about the M3’s intentions to stick to terra firma, then all the convincing I needed came from its ground-hugging, aggressive stance – a large air dam and cooling intake snorting up dust devils, xenon headlights glaring angrily and a quartet of massive, 18-inch Z-rated rubber on alloys pawing the ground; 225/45 ahead and 255/40 behind. Like a crazed bull on an earth-bound rampage.

A choice of listening was available this early morning – 92.5 FM on the brilliant Harman-Kardon stereo or the promise of a windows-down, concert hall feast of frenzied engine and blistering, four pipe exhaust note. I chose the latter. Unlike its bigger sibling, the 7 series, the M3 does not waste time with fake introductions and handshakes – the ‘sportscar’ start/stop thumber has been bypassed (and thankfully, BMW’s latest obsessive compulsive disorder, also known as the i-Drive), in favour of simply turning the ignition key to rouse an extremely virtuous and docile-sounding engine. Did someone say that the first impression is the best?

A six-speed, double-H gearshift to my left and a chunky, leather-wrapped wheel in my hands. Two seats, two doors and I didn’t want to get out of the cockpit to get a fix on boot space. I don’t even know if the M3 has a boot – BMW says something about accommodation for golf bags, but I couldn’t care less. Driving this beast was undoubtedly better than hitting a silly little dimpled white ball all over an expanse of  manicured green.
The drive-by wire throttle responded with telepathic alacrity and the promised internal combustion symphony had begun. Believe me, each primal war cry, as the engine stretched its neck out to reach its 7900 rpm redline, made every hair stand on root-pulling end – as if paying respect to some arcane anthem. With
0-100 kph in 5.2 seconds, or in other words, a midriff that pinned itself firmly to the seatback and then ironed itself flat, I definitely couldn’t be accused of sloth, not in the M3. Not when I was making 37 kgm of earth-burning torque sweat it out at 4900 rpm. Not when I could be early to work, early home, early to work, early home... the same day. The ed would be happy, my wife would be thrilled and I couldn’t have found a more agreeable way to spend the entire day, month after month, year after year. I would even go to work on Sundays. And national holidays.

Every little undulation on the road whispered a word of welcome through the palms of my hands and the seat of my pants, before the car passed  on to the next. As the M3 forcefully reeled in the horizon, screaming at it with all 3246 CC of naturally aspirated energy to arrive a bit faster, I became aware that there was a lot more room for the right foot to stretch – and a whole arc of the speedo needle later, attain BMW’s regulated
250 kph top speed. And a more advanced state of shaky-handed and wobbly-kneed nirvana. But there were limitations on what one could do with a brand-new car. Especially when my bank account belied the fact that I was the Sultan of Brunei. ESP, in the world of this car, is not the electronic, sobering experience that Mercedes-Benz doles out. In the M3, it’s a bow to the occult, an understanding of the supernatural and the means it uses to establish zero-lag communication with its driver. Extra Sensory Perception. This car predicts and responds to the slightest, or biggest change in direction a driver might want to take, obliges with the speediest braking and dishes out the most immediate acceleration one could ever dream of. It thrives on instinct, rarely forgives rational thought and I can just imagine a lifelong affair behind its wheel, travelling across the globe, in search of the most challenging mountain roads to wind around. Hello, is that BMW AG? Yes, I need an M3 for life and an equally lifelong supply of premium unleaded and... hello, hello... Well, I still think it’s a great idea.

Let’s look at it more pragmatically. I definitely can’t afford the Rs 59 lakh (ex-Mumbai) pricetag that irritatingly precedes the ownership papers. But if I could, I would unhesitatingly head to the dealership and put the cash down. For the price, you’ll get the kind of supercar performance that the Ferrari 360 Modena comes with, at about half the price. With the practicality and the safety of a two-door coupe. And the reliability and unshakeable build quality of a BMW. Unlike the Ferrari though, the M3 is a study in understatement. Though to the person who knows his cars, this machine will tell him you know yours.

WHAT?
BMW M3
WHEN?
June 2002
HOW?
A casual call to the BMW dealer in Mumbai. An M3 is around! It’s off to be delivered to the customer the next day. Hold on, don’t deliver it just as yet. The next morning Param is in front of the dealership. Chewing his nails in anticipation. A menacing dark blue M3 materialises, accompanied by the sweetest notes known to man. It’s good Mumbai cops don’t know about speed-guns yet...
WHY?
One of the greatest driver’s cars ever. A feeling reinforced 343 times.
WHAT WE THINK OF IT NOW
Param wrote the story, but someone else did BSM’s quickest 0-200 kph run before he packed the Nikon.