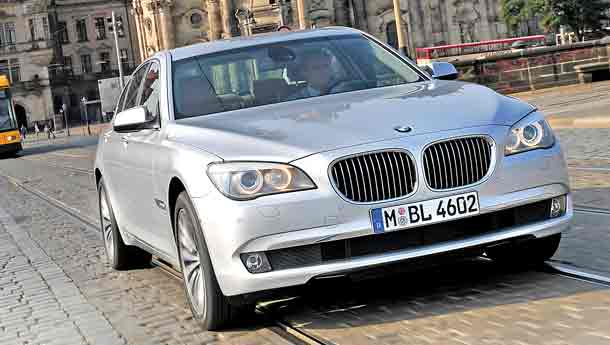 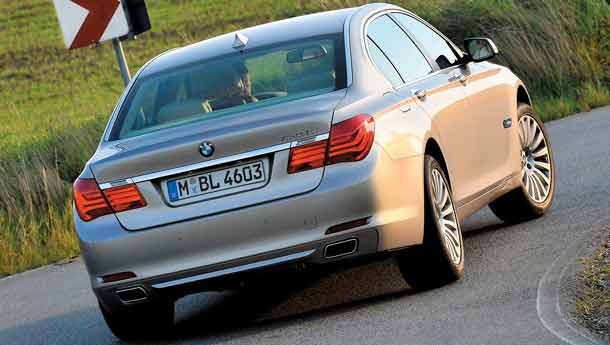 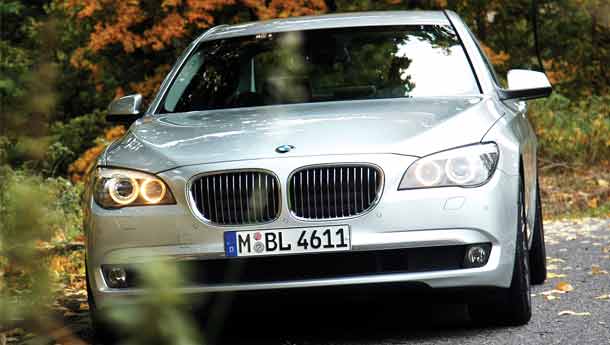 The erstwhile East German countryside has changed a lot since The Wall came down. You see modern cars, refurbished houses and people wearing fashionable clothing. But there are indicators of the socialist past – the most obvious one was unfurling in front of the brand new BMW 750i that I was wafting around in. The black-top was narrow and winding – wide enough for two Trabants or one Trabant and a truck to pass each other without catastrophic consequences. But the 7 Series is a wide automobile and every time something larger than another car came against me, my heart skipped a beat. And when trucks sped past I simply closed my eyes and prayed.

But when there was no traffic – which was the way things were for most of the day – I enjoyed the spectacular show called ‘autumn in Germany’ that was playing all through the test loop. It was so beautiful; I felt I was driving in slow-motion in a big budget ad film – complete with colourful leaves floating down from the heavens and getting caught in the aerodynamic draught of the mighty machine.

As far as machines go, the new 7 is indeed mighty. It is bigger than its predecessor and has features that can be beaten only by the International Space Station. Well, you get the picture. Take a deep breath and read the following passage: Lane change warning, blind spot monitoring, night vision that can identify human shapes (hit the animal, swerve for the human, thank you!), head-up display that can read sign boards (when your wife is sleeping) and tell you the speed limit, and four-wheel steering. These are over and above the stunningly loaded basic car and in no way completes the options list that runs on to optional active steering and optional Dynamic Drive body roll control. And then, it has got Internet connectivity. An Internet café that can do 100 kbps and 250 kph? Yes, that would be the new 7er, sir, thankfully minus the espresso station (got you there, men from BMW who put together that expansive options list!).   The last 7 Series was more of a shock treatment by the Chris Bangle school of thought. It was thrust down the throat of unsuspecting luxury car buyers like a very large spoon of Waterbury’s Compound. But it cured the world’s obsession for the normal, all right. A huge amount of wealth in developing economies ensured that the last generation 7 Series was a serious success story too. And the world got comfortable with the concept as cars such as the 5 Series and the Z4 were released. In my eyes, the old 7 is tame compared to the 5er. But it looks like the design team was given a brief to produce something sober for the traditional luxury car buyer. The result is a car that looks serious as well as calm and sporty as well as luxurious. A larger-than-life kidney grille and an air intake that stretches the width of the car hint at more power and prestige as compared to the rather shy and slim lines of its predecessor. This is a BMW that you can park next to a Mercedes S-Class without offering any ‘young at heart’ excuses or ‘my son chose the car’ apologies.

The vast hood is free of the surface detailing flourish we saw in the new X5 and this results in a less aggressive front end. A mild feature line closer to the door sill is a polite throwback to flame-surfacing. Headlights look ready for a face-lift already, with the rather silly Dynamic-Xenon motifs on them, but the tail-lamps with ‘molten’ LED fixtures are a revelation that hint at future possibilities. All in all, the new 7er is more traditional without wearing a papal gown and those who own the last generation cars should preserve them in airconditioned garages as the new model has rendered them into instant classics. The world remembers a revolution as compared to a mere political change – whether the outcome was good or bad, right?

The theme of ‘less radical’ continues in the cabin too. The handbrake and gear lever are where they are ‘supposed’ to be – and I love it enough to send BMW designers a Thank You note. And the new iDrive does not require a high IQ rating or a pre-teen Nintendo expert to operate. The console is cleaner compared to the older model and the multi-function screen is well integrated despite the larger size. I was concentrating on the head-up display for navigational inputs, but I am sure those who read maps will appreciate the unit better. I strongly believe that the pistol-grip lever that is borrowed from the X5 is meant for left-hand drive countries, as your palm covers the lit display on the lever in right-hand-drive application – something BMW can look into in the future. The seat adjustments are more conventional and hence easier too. This is an agreeable cabin to spend long hours in and it’s every inch a BMW too. For the time being, the 730 diesel is not available in the long-wheel base format, but there is enough legroom at the back even with the front seat pushed back. Lots of genuine wood with optional matt finish and nice smelling leather keeps the 7er in a league comprising the finest cars from around the world.

During the course of one day, in and around Dresden, I got to get behind the wheel of the 750i and the 730d. The former is the loaded gun, with a twin-turbo V8 featuring High Precision Injection. It displaces 4395cc to produce close to 407 bhp. Its 60 kgm top torque, available between 1750 and 4500 rpm, ensures a blistering run to 100 kph in 5.2 seconds, with the stretch versions 0.7 seconds quicker to the three digit mark. When driven carefully, it will sip petrol at the rate of 11.4 litres for every 100 km. On the move, the 750i was impressive and gobbled up autobahns just as a car that belongs to the top of the automotive food chain should. The six-speed automatic was born to play slave to this master motor and it was a real struggle to stay away from trouble. If you thought there are no speed limits on all German roads, ahem, you are wrong. Our test car came with active steering and four-wheel steering and that meant turn-ins were sharp and parking was a breeze. As we left the autobahns and entered the above mentioned post-card territory, the 750i blended in and offered the kind of ride a magic carpet does in comic books of yore. You can thank what BMW calls Efficient Dynamics, which uses multi-phase and hot-moulded steel in the body support structures, extensive use of aluminium (for roof, hood, side panels and doors) and pressure cast aluminium struts at the front, final drive with aluminium housing and aluminium crankcases for all engines for the light-footed feel of the car. Makes one wonder what BMW would have done without aluminium. All that lightweight engineering makes the new 7er 55 kg lighter despite being stronger and more loaded on the equipment stakes.    Going by the success of the Mercedes-Benz S 320 CDI in India, it will be the 730d that will do brisk business in India as sales start early next year. The modest output of 245 bhp notwithstanding, the oil burner that features the third generation common-rail fuel injection system featuring piezo-injectors (operating at an injection pressure up to 1800 bar) is as state-of-the-art as it gets. The 130 bhp per tonne car is propelled to 100 kph in 7.2 seconds (55.1 kgm of torque, mind you) and is a complete revelation on the road. An extremely agile body and the perfectly balanced powertrain (an inline-six powering rear wheels) means you don’t waste your time getting the best out of the available power. The 750i might have 407 bhp but it is the 730i that makes you feel like a good driver. Period. Add to that 12 kpl when driven well and you’ve got a definite winner in your hands.Suspension duties in the new car are handled by an all-new double-wishbone front axle and an all-new multi-link rear axle – of course, all made out of... you guessed it, aluminium. The long wheelbase petrol models get air suspension and the resulting waft-ability as standard.

Well, it took BMW a 281-page booklet to describe its new car and I have already used 1,408 words for my driving impression. And I can go on and on. But the real fun and games will happen when we get an S 320 CDI to take on a 730d on our PET track. Maybe we should drive them across a few countries before we come to a verdict – because that is exactly what these cars are meant to do. But for the time being, I can sum up by saying that BMW has created a car that drives like a total dream, looks less of a nightmare and is packed to the kidney-grilles with goodies. Bring on the champagne bottles, ‘cause it is time to celebrate a great automobile.