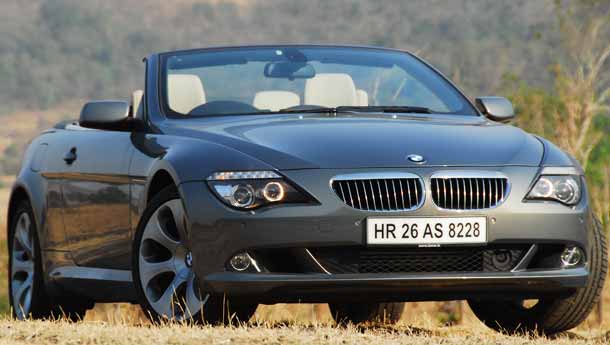 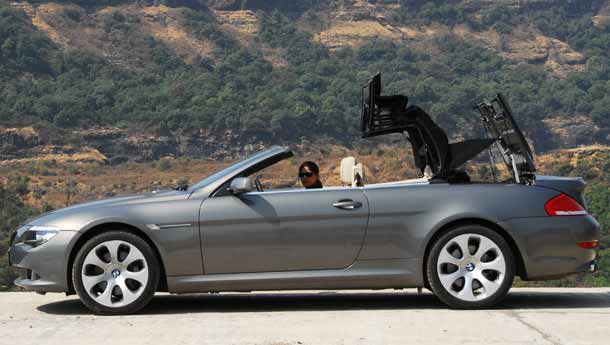 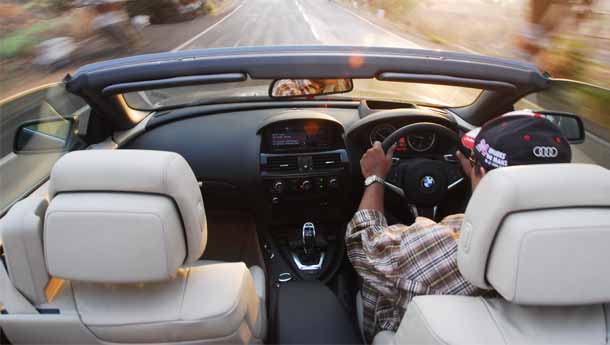 Times are good as far as test cars go at BSM. There are so many new cars to drive that I don’t have time for my beloved long termer, the Jetta. And you know that things are boiling along fine when the BMW 650i you have been driving is taken back by the press office so that they can issue you the new 7 Series.

But the good thing about being in this wonderful industry is that I have wonderful friends and the very next day after the 7er went back, the 650i was back with me – gleaming tyres and shining paint and all. And guess what, I was already missing what belongs to that rare species – a BMW that tries to impress you and not the other way around. Just like the wealthy lady who wears a sizzling short skirt, adding to the frustration of all the poor little boys in the neighbourhood.

Look at those splendid 19-inch floral pattern wheels – don’t they belong to a rough sketch for a new car rather than one that is under series production? A glimpse of that pointed snout coming around the bend can have anyone weak-kneed too. And the perfection of form when the top folds down makes you wonder whether the 6 Series is really four years old.

Still, as far as purists go, and I am afraid I am an aspiring one, a convertible is a bit of an oddity if your name is BMW and you make extraordinary driving machines. And if you have driven fast Beemers, especially those M-badged cars, then you won’t need much time behind the wheel of the 6 convertible to get what I am talking about. A fast BMW was, is and will be a coupe. Period.   Romantic, ‘look at me’, motoring is not the Bavarian legend’s forte – Porsche Boxsters can teach  Z4s a lesson and Mazda Miatas are much cheaper – but they are getting better at it. And with the 650i,
they have ensured that it is more of a finished product than one that carries a ‘men at work’ badge. Take, for example, the hood – in twenty-odd seconds the car is transformed to a convertible with faultless lines and there is no better party trick to impress bystanders. My wife, in her exuberance and with a sheepish me
inside the car, did the entire stunt while waiting for a signal to change. I could see people picking up their jaws from the ground, really.

A motorcar that tugs the heartstrings does various things to you. I really wanted to get out of town for the shoot, for example. The road to Malshej Ghat in the Western Ghats is literally in my backyard and it took me all of ten years of staying in Thane and the BMW 650i to discover it. Leaving early in the morning meant catching the first rays of the sun as it came out of hiding and soaking in the last traces of  a winter morning chill in the air. With the top firmly down, the 650i blasted along, singing a V8 thrum that is loud enough to stir the soul but understated enough for the world to still like you. Talking of V8s, this one displaces 4799cc to develop 367 bhp and 50 kgm – numbers that cannot impress the M-division, but enough to dismiss a standing km run in 24.7 seconds and achieve 100 kph in 5.5 seconds. Mind you, all that stow-away trickery and a zillion electric motors mean a car that weighs close to two tonnes even before you load it up, and for all that girth the 650i is an agile car indeed.

When driven properly, read fast, the 650i shrinks around you to become a sports car of dreams. It is not your average squirt and turn rear-wheel driven toy; instead it transforms itself into a driving tool that can be deceptively fast even when confronted with corners every forty metres or so. And unlike smaller, lesser-engineered sports cars or hyper supercars, the 650i is more forgiving. As in, the massive discs will allow you to miss a braking point or two and the suspension will allow you to carry a little bit more speed than the optimum around a bend.   The only fault I could point out after a week of sheer bliss was the tendency of its front end to wander under heavy braking – especially on rough roads. But that would be nit-picking. When you are in sync with the road, the magnificent roadster will turn in with ferocity, with the tyres providing huge levels of grip. And if the going is all about an easy road, then the V8 will let you cruise the way only V8s can. That is when you tend to put an arm on the door, hum a tune and wish for pretty surprises at the other end of the road.

There was one section of the road that leads to Malshej which looked like a live watercolour painting – pointed mountains hiding an already awake sun, a thick veil of mist that fought with escaped rays and acres of deciduous trees craving for spring. The perfectly laid out tarmac with the safety of Armco barriers meant the day out with the 650i will be remembered fondly for years to come. Needless to say, I was floored by the experience and hit the roads again the next weekend. This time, the 650i peppered the Mumbai-Pune expressway at strictly illegal speeds and with its exhaust note bellowing in the long tunnels.

I don’t think this story needs the list of options that the car be ordered with – let us say it is a bottomless list. Consider this car as a just reward for all the hard work you have put in or, better still, gift it to that special someone in your life. This is the sort of car you enjoy  beautiful days in. It is a car that can be driven fast as well as slow and you will be able to enjoy the experience regardless. At Rs 85.5 lakh, ex-showroom, Mumbai, you can be certain about its exclusivity too. A small price when you know that you are spending on a classic celebration of modern motoring, rather than just another car.