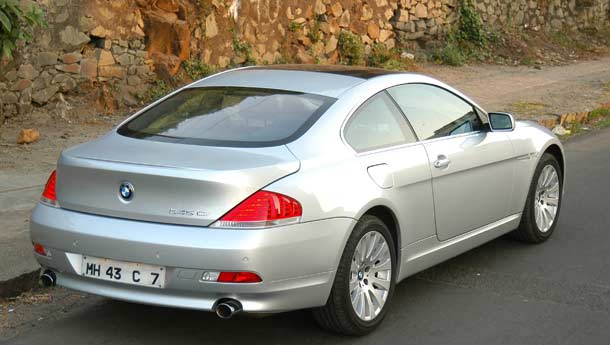 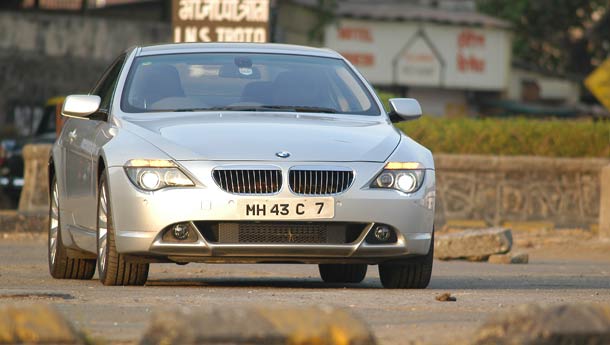 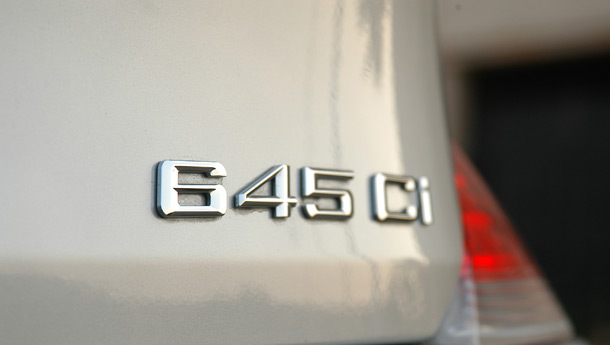 Say what you want, I am not ashamed to be seen with a Bangled up car. Okay, maybe I’ll make an exception with the 7 Series, but the grand coupe that I am driving is perfectly fine.

BMW purists and most members of the international motoring press fraternity would like to tie a huge V12 engine block to his feet and throw him into the Atlantic Ocean, but as far as I am concerned, Chris Bangle is quite okay. The design chief of BMW, famous or infamous depending on your point of view, has changed the way Beemers look. They are more cutting edge, unadulterated 21st century vis-à-vis Mercedes and Audi. And here, in Mumbai, this 645Ci is simply out of this world.

It was the first time I was seeing it in real life and I was taken aback by its sheer presence and its pronounced, muscular hood that barely hides what’s inside. For a two-door coupe, it’s quite large, but with an overt sporty orientation, there’s not an ounce of fat in that chiselled body. I felt obese standing next to it (to tell you the truth, I feel obese standing next to anything). When BMW uses words like ‘exceptional dynamism’, ‘precision’, ‘harmony of elegant surfaces’ to describe their fairly new 2+2 coupe, all I can do is nod my head sagely and say Amen, Amen and Amen. I mean, look at that sinewy front fender, the sharp body crease, the lighting details, the boot... hey, which idiot left the boot open? Heh, heh, sorry, small flaw in the overall design.   Even if you don’t like the way the 6 Series coupe looks, you can’t fault what lies beneath its crisp skin. You have the underpinnings of the 5 series – the benchmark in the executive saloon segment – and a massive V8 that’s seen in virtually all the top-end Beemers, bar the smaller ones (for now, at least!). It was in 1976 that BMW had introduced a large-sized, luxury coupe in the market and branded it the 6. But production of the first 6 ended 13 years later. Now, what the Bavarian automaker has cleverly done in re-introducing the 6 is that they have taken a 5 Series sedan, snipped some 11 cm off its wheelbase, covered the 5er underpinnings with a wee bit wider and shorter coupe body... and hey, Gunther is your uncle! But wait till you read about the cleverest part: the 6 Series coupe is priced closer to the larger, more luxurious 7 Series instead of the 5. Smart, eh? The 6 Series was showcased at Frankfurt in 2003 and went on sale in Europe later that year.

And in barely 12 months, I am crisscrossing the streets of Mumbai with the top-end version and making a statement with a luxury car that’s not even a full-blown sedan. Really, it’s only for the enlightened buyer. And those who have attained nirvana in motoring-dom and have the money to spare will opt for the full-blown 645Ci. Powered by a refined 4400cc V8 borrowed from the 745i, this 32-valve engine features Valvetronic variable valve control, and is one of BMW’s finest offerings. It produces a whopping 333 bhp at 6100 revs and a staggering 45.3 kgm at an acceptable 3600 revs. BMW claim a 0 to 100 kph timing of 6.5 seconds (this is for the automatic version, the manual manages it in 5.6 seconds) and a top speed that’s electronically limited to 250 kph. No, I couldn’t test it, but let me tell you that once you are in the power zone, it seems uncontrollable.

It cocoons you inside, and the interiors and the multi-function, sporty three-spoke steering fit the bill – that of a sophisticated automobile. Though BMW claim that they have shaved off some substantial weight in the front by using lightweight aluminium instead of steel for the hood and thermoplastic for the fenders, from inside, you can sense the gravity of the front end. The monstrous engine is barely heard inside, but outside the exhaust note is thick and growls menacingly rather than roars – but I think BMW has deliberately muted it. The car that I drove came with a six-speed ZF automatic transmission with Steptronic – you guessed it, slide the lever to the left, and then upshift or downshift as the case may be. I tried it for some time, but it doesn’t have the raw feel of taking a proper gear lever and wrestling with it, so I put it in D instead and let it go.

Though it’s rear-wheel driven, the gravity of the front end seems to suck the car out on the road and in no time you are doing an illegal 100 kph on city roads and don’t even know about it. Well, that’s the case with all powerful cars, but here, the issue is that at low speeds, the 6 Series makes an effort – an extremely obvious effort – to stay checked. Besides, the automatic gearbox saps the low-speed driveability a little bit. Trust me when I tell you this, because the Mumbai cops were in form that day, with speed guns and all, avoiding getting challaned with this machine was a bit of a bother. Even piddly Altos were being nabbed.   Another reason why it’s absolutely raring to go is that the 6 Series comes with BMW’s Dynamic Drive Control as standard. Which essentially means the engine is a bit more responsive to your throttle inputs and the auto’box is tuned to shift that much more quickly. Yup, it deserves to be taken over some smooth and curvy stretches. And with a suspension setup borrowed from the 5 Series, it will revel on such occasions. Up front, you have a double-joint, spring strut axle with track control arms and an integral axle consisting of cast-aluminium lower control arms. For better stability and control while straightening the bends, you can get front and rear hydraulic variable-rate anti-roll bars as an option.

But the highlight of any BMW is its steering – not to be confused with the new Active Steering that you can read about elsewhere in this issue. The word that goes best with BMW’s steering is ‘telepathic’. Yes, it is speed sensitive, but it’s so well-balanced and precise. Shucks, for some curvy, traffic-free roads...

Matching the steering is the taut chassis, which makes you one with the car. There’s hardly any body roll, and the ride quality is brilliant too. It may be stiff for most people, but remember that it’s a sporty coupe and not exactly a saloon, which is why it’s just right. Superbly assisting the overall setup are a quartet of 245/45 R18 96W Bridgestone Potenzas and gorgeous multi-spoke alloys.

Of course, there are a lot of high tech bits I can tell you about, the way the car has been engineered to save weight and how lots of active and passive safety features have been incorporated in it. But suffice to say that just its drivetrain, chassis and overall appearance make it one helluva desirable car. Heck, I haven’t even told you about the motoring world’s favourite bugbear, the iDrive system! See, you can’t blame Bangle for everything.