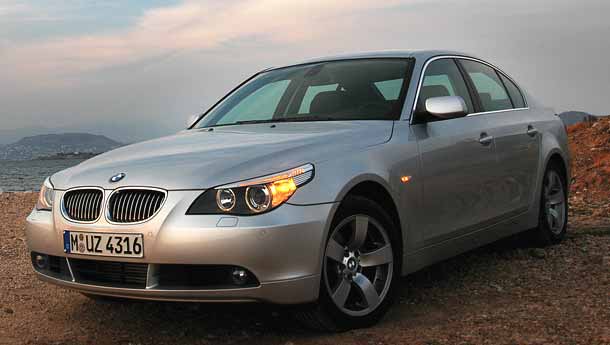 Want to know what pure bliss is? A perfectly balanced rear-wheel driven car on twisty mountain roads is
how I would spell it. Add a few BMW badges, a 200 bhp inline-six and a splendid road that lines an ocean
and you get the picture. What is not so perfect in the traditional sense of the game is that this particular BMW that I was driving on Greek roads was not powered by an inline-six petrol. Instead, a common-rail diesel was doing the job and I had to pinch myself to believe that.

The occasion was the new BMW X5 launch drive (BSM January 2007) and Abhay Dange, the corporate communications head of BMW India, had thoughtfully saved a couple of delicacies from the BMW car pool for Indian journalists to sample during our stay in Greece (the other car was a stunning 3 Series convertible). No, there was no official hint that the car was to be made in our country – but then we all know that it will be, right? We know for sure that the 525 diesel was tested extensively in India last year, along with the 3 Series petrol.Back to bliss business. There I was driving the sculpted BMW and wondering where the diesel clatter disappeared. My ears were not picking up undue noises on the move, my fingers were not getting the vibes through the steering wheel and my right foot was sinking into the depths of the footwell as the midsize Beemer bolted onto the next apex. If this car is an oil-burner, I remember telling myself, the immediate future certainly belongs to diesels. The road was beautifully paved and it had enough twisties to make life interesting.

It must have made a beautiful sight, the way the sculpted BMW was making rapid progress on those roads. The 5 Series features a watered down version of flame-surfacing and is almost traditional by architecture. Sure, the lighting fixtures and a few bold slashes ensure that the car is not mistaken for anything else. BMW designers achieve that through a certain poise that seems to grace almost all cars that carry the propeller badge. But what is important to note here is that the new 5 Series (E60) is a big car indeed. As in, while the last generation 5 looked demure next to say an E-Class Mercedes-Benz, the new car looks substantial enough to dwarf its occupants. And there is actually a lot of space inside for a sedan with sporty intentions and even tall sardarjis with their turbans won’t have a problem with headroom in this one. The interior otherwise is typically BMW – very business-like and smothered with quality bits. It is difficult not to run your fingers over those surfaces, really.

We have already made a mention of how quiet the diesel engine is on the move, but is it powerful enough to propel an ultimate driving machine? Certainly it is – common-rail injection along with a variable geometry turbo ensures that the 525d accelerates to 100 kph in 7.7 seconds and manages a very decent 230 kph given the tarmac. That is excellent performance for a car that weighs on the wrong side of one-and-half tonnes (actually BMW has saved weight by using plastic panels for the wheel arches, while the bonnet is crafted from aluminium). Still, it’s enough to worry the brilliant Mercedes-Benz E280 Diesel.

Our car had a six-speed manual box, though an automatic is destined to come to India. The gearbox lever felt as if it would come loose in my hand – but it provided lightning quick gear changes. It is entirely another thing that with 40 kgm of torque at my disposal, I could have slotted it in fourth and driven it like an automatic all day. Again, this is a very refined engine – okay, not as refined as the silky smooth inline-six petrol, still. And you need to be a terrible driver not to keep pace with competition this side of M-Power cars. While the ride quality on offer was brilliant on smooth-as-a-billiard table surfaces, it may not beat the E-Class Merc on Indian roads in this respect. Expect higher profile rubber shod on smaller wheels on the 525d assembled for India. A great deal of aluminium goes into the suspension hardware as well and that means less unsprung mass and a razor-sharp steering feel. While the struts up front (with double-joint tiebars) are not exactly space-age design, they do a good job of giving the car exceptional directional sense. Nothing, I repeat, nothing is vague about the way the 525d steers – it is almost as if it reads your mind and starts steering before you do the execution bit. If you were expecting a heavy front end thanks to the diesel power plant, you will be left searching. That lump-on-the-nose feel synonymous with diesel cars is virtually absent. Active steering with its own set of motors and whistles is complicated but works very well indeed. It needs to be seen whether BMW offers it in the Indian-spec cars. Rear suspension is a four-arm setup that benefits from anti-squat and anti-dive gadgets. Oversteer is what comes naturally to the car, but a sophisticated and complex traction management system ensures that the hooligan in you stays tamed.

Despite the overall mass and truckload of equipment, this is a diesel BMW that feels light on controls. Agile steering, lightweight wheels and suspension components and surefooted brakes make you feel that you are driving a sports car in disguise – which is not very far from the truth. I was in Greece to sample the new X5 and naturally, the time spent behind the wheel of the 5 Series was limited. But the car did leave a lasting impression on me. And as the D-day for rolling out BMWs from the Chennai plant approaches fast, I am getting pretty excited at the prospect of a proper test car on Indian roads. Maybe it deserves a very long test drive, maybe a blissful one through roads lined by an ocean. As you may have noticed, I have started my countdown already.