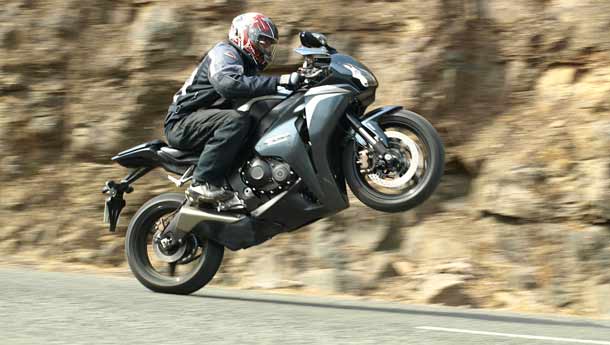 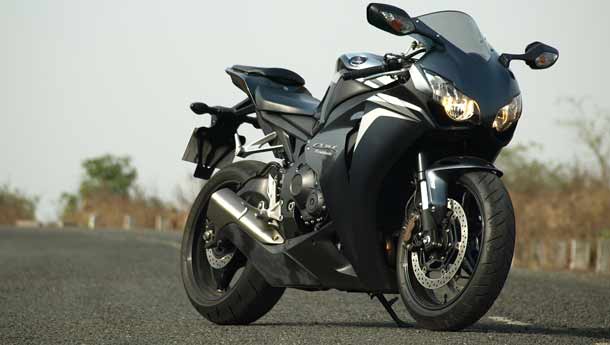 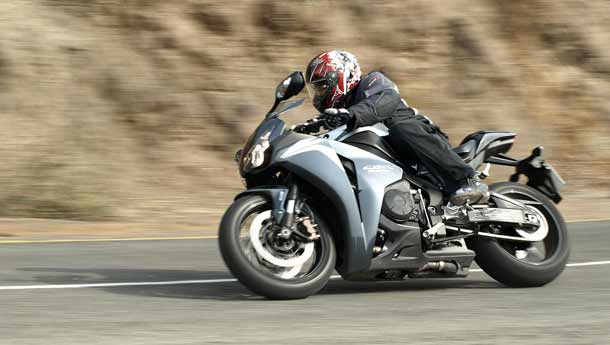 What would you do if the best thou' in the world was available in India? Would you continue reading this story or drop this issue right away and ride like hell to the nearest Honda showroom to buy one? Well, those of you who can afford it, please do the latter right away, and don't forget your helmet. Those who can only dream of buying it (like me), kindly read on.

When the CBR1000RR Fireblade debuted in 2004, it didn't exactly set enthusiasts' pulses racing. They thought it was too mellow; a goody two-wheels that did everything acceptably well, but failed to fire the passions of those who wear their biking gear to sleep. It continued to be the same accessible yet almost-too-tame missile until 2008, when Honda unleashed the new Fireblade that wiped every contender to the best litre-class bike aside and claimed top honours in shootouts all over the world. And what we have here is the 2009 model, improved over the earlier class-leading motorcycle. Should be fun, eh?

I am still not sure what I think about the way it looks, which is very different from preceding Fireblades. And that seems to be the case with whoever's gaze falls upon it. The proportions are impeccable. All the visual mass is concentrated towards the front, while the tail section is left suspended high up in the air. The silhouette looks very much like the RCV's, but it is the details that somehow don't make an impression. The front end looks like the flattened love child of the MTT Y2K and the Triumph Daytona 675. It also somehow manages to remind me of a parrot, but that's just me I guess. The rear looks good though. To my bleary eyes, it looks retro yet modern at the same time. The rectangular-ish shape of the tail light and the sharpness of the LEDs lend it that air, methinks. That boxy-looking exhaust that peeps out from under the bodywork is also refreshingly different than the usual underseat units that have now become commonplace. The retro-looking Honda badge on the fuel tank does look out of place on this state-of-the-art flagship though. There are a lot of details that will have to be taken in first-hand in order to appreciate the thought that has gone into making this motorcycle. But really, Honda should have seen it fit to offer more colour options than Achilles Black Metallic and Pearl Siren Blue. So, in a nutshell, that is how the ’Blade looks. But what does it have to offer?

Plenty, actually. The 2009 ’Blade is the first track-focused machine to sport an Anti-lock Braking System in conjunction with Honda’s Combined Braking System and we Indians get the top-of-the-line version that has all the bells and whistles. So, you get the brake-by-wire Combined ABS system, the latest generation Honda Electronic Steering Damper and Honda Immobiliser Security System. These are all the ‘extra’ features, by the way. Don’t forget the 999cc, 176 bhp, inline-four that can propel you to 290 kph while demolishing the 0-100 kph run in less than 3 seconds. Now that’s a standard feature I could live with. You also get fully adjustable 43 mm USD front forks and an equally adjustable, MotoGP-derived, Unit Pro-Link rear shock. Add to that the multi-function instrument panel and top-notch fit and finish and you have nothing you can accuse the Fireblade of lacking. What, no traction control?! Er, not yet. But I suspect that it won’t be long before that is available. On the 2010 Fireblade, perhaps?

The engine feels invincible, aided further by precise fuel metering thanks to the PGM-DSFI. It was only cold starts that had the ’Blade running slightly out of tune, but once up to temperature, it sang like a tenor at the peak of his form. The clutch is cable-operated, not hydraulic, presumably to save weight, and that is the reason why engaging first gear sounds like a gunshot. The ’Blade sounds particularly nice after 4000 rpm when a valve opens up in the exhaust to free up more of that four-pot motor's howl. The power delivery is smooth and mind blowingly quick at the same time; you cannot help feeling like a deer in a car's headlights once the tacho needle crosses 8000 rpm. The ’Blade launches itself at the horizon like a charging rhinoceros that has somehow gained the grace of a galloping horse. And this is exactly what makes this motorcycle so special. The torrent of power is overwhelming, but it doesn't feel like Armageddon at any point. Every full-bore acceleration run was accompanied by a sky-borne front end for the first three gears, despite me thrusting my entire weight so far forward, I was barely sitting in the seat, jockey-style. But it was not scary in the least bit, thrillingly enjoyable is more like it. The superb throttle response gives you absolute control over the amount of power torturing the rear tyre. This is something that you will appreciate whether you're out on the highway overtaking endless rows of slower traffic or at the race track modulating the throttle deep in a corner trying to hit the apex at maximum speed. Or even when you're popping wheelies. But is the power all there is to the ’Blade? No way.

Handling, in fact, is more impressive than power in this case. The Fireblade feels considerably smaller than other litre-class bikes, more like a V-twin and almost like a 600, which is a big factor in making the ’Blade more manageable. I couldn't tell if the 10 kg that the ABS system adds makes any difference since I haven't ridden the non-ABS bike, but nothing felt unduly out of place. The chassis and swingarm nexus constantly conspires with the front and rear shocks to make the Fireblade handle like the sweetest dream on two wheels. Frankly, there is just too much scope for fine-tuning the suspension than I could be bothered with, and since the standard settings worked just fine for me on the road, I left them alone. But I wouldn’t doubt the fact that fidgeting with the compression and rebound damping until you hit the sweet spot would pay huge dividends on the track, which is where I would have ideally liked to take the ’Blade. Nonetheless, on the hilly roads of my test route, I was reminded of cockpit footage of the Isle of Man. While I was nowhere near maxing out the bike, it still made me look like a hero in my own eyes!

The combination of ABS and the slipper clutch add to make it one of the safest sportsbikes you can get. I lost count of the number of times I banged down the gearbox and was thankful for the slipper clutch working hard to earn its living. The CBR will call your every bluff and take care of you when you've pushed your luck over the edge. Even when I attacked a bumpy corner with a bit too much enthusiasm AND braked mid-corner, the Fireblade held its line without sitting up and charging into the scenery. There is more cornering potential here than most riders can use, forget the street, I am talking about the track here! There are very few people in this world who can harness the full potential of bikes such as this and they are all in WSBK. And since I am not, I'd like a middleweight bike with around 70 horses and the same impeccable handling as the Fireblade. Are you listening, Honda?

Anyway, the reason why the Fireblade has been showered with praise by bikers all over the world is the way everything mentioned above comes together when you really start moving. Build up some speed and it all comes together. Gearshifts are smoother; the suspension feels even more sorted and combined with the power on tap, it makes for on heck of a guided missile. At 70-80 kph, you can actually treat it like a Stunner on steroids, punting it into gaps and throwing it around like it was a much smaller bike. After 90 kph, it's time to treat it with the respect it deserves, because the slightest twitch of the throttle will show you improbable numbers on the digital speedometer. Nothing that the C-ABS equipped twin 320 mm discs can't take care of though. You can haul on the anchors at any speed and the ’Blade buries its fat front Bridgestone into the tarmac and just stops. No fuss, no drama, just gut-wrenching stopping force, albeit with no feel whatsoever when the ABS kicks in. The rest of the time, the brake lever is alive in your hand, constantly telling you how much pressure the 4-piston callipers are exerting on the discs. Astounding yet accessible, that's the Fireblade's performance for you.

Negatives? Alright, in traffic, it will be a pain to live with. Joints and backs will ache and right feet will roast. Also, our test bike came with an iffy gearbox, though it was due for a service that should have been carried out before it came to us. Honda has been making excellent engine/gearbox combinations since shortly after the wheel was invented, so I shall put this down to be a one-off case. The C-ABS system relies heavily on electronics and this could be a bit unnerving, though the brakes work conventionally even if the little green chips decide to go on vacation. I, for one, would like Honda to make the non-ABS version available as well, never mind the fact that the system is smarter than I am. It will make it cheaper by a lakh at least. And while at it, Honda would do well to introduce all the colour options too, especially the Repsol replica paint job. Why Honda has chosen to launch the bike with the dullest colours they could think of is beyond me. As of now, second looks are fewer than say, a Yamaha R1 or a Kawasaki Ninja. Other than this, I really cannot think of anything else that I can fault with the Fireblade. Heck, even its mirrors work and it returned 12 kpl, not bad for a machine designed to conquer all on the track! Blunt it might be, but it sure cuts it. At Rs 13.37 lakh, ex-showroom Mumbai, the pricing is unfair to the point of being criminal, but that's only because I cannot afford it. If you can, I suggest you go for it. After all, it's not everyday that the best thou' in the world comes to India, right?