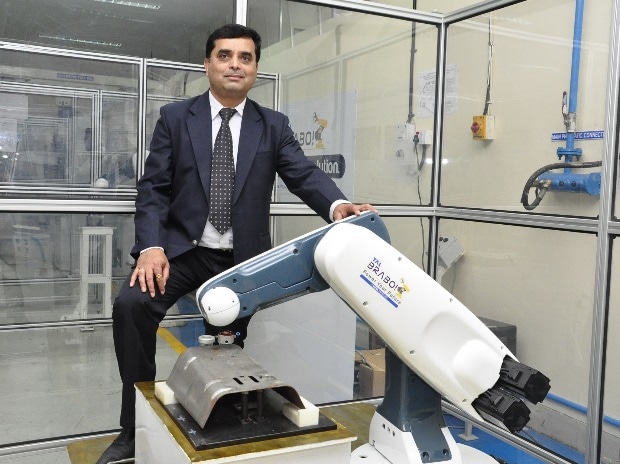 
Betting on this new product, for which the company estimates sufficient traction among small and medium businesses, TAL expects the robotics vertical to contribute almost 40% of its overall revenues in the next five years, from a marginal share at present.


Amit Bhingurde, TAL’s chief operations officer-robotics, told Business Standard they have already sold around 30 robots after they went to market in October 2016. Of these, only four-five were sold to original equipment manufacturers (OEMs), the rest being sold to small and medium enterprises (SMEs).


TAL currently draws around 70% of its revenues from the aerospace vertical where it is a supplier (tier-I and tier-II) to big names such as Boeing, Airbus and Rolls Royce.


The manufacturing solutions vertical accounts for most of the remaining revenues as the robotics vertical is still in a nascent stage.


But Bhingurde is confident that with a lead pipeline of more than 400 Brabos and plans to focus on exports, the robotics vertical is likely to grow to a 40% share of overall revenue within the next five years.


The Brabo, which can be useful in materials handling, cementing applications, assembly operations etc., has been popular amongst SME customers, because of its affordability.


It costs between Rs 4.75 lakh and Rs 6.5 lakh, and Bhingurde claims the cost is recovered within 15-18 months of commissioning the robot.


The job that an operator takes seven days to complete is done by a Brabo in 2.3 days, thus significantly reducing the turnaround time.


“With the growing shortage of skilled manpower, ever-increasing wages, IR issues with existing labour unions and changes in regulatory framework, there is a strong case for adopting automation in the industry,” TAL said on its website.


Bhingurde said according to the International Federation of Robotics (IFR), the demand for industrial robots in India (the category the Brabo operates in), is around 6,000 units per annum.

TAL has a manufacturing capacity of 3,000 robots in a year which can be readily expanded up to 10,000 robots a year based on demand.


Bhingurde, however, feels they are expanding the market by tapping SME customers. “Nearly, 80% of robots made in India were till date going to OEMs. But, the SMEs represent a huge untapped market,” he said.


TAL has already exported one unit each of the Brabo to Dubai and Italy and is now working on getting additional international certifications that would enable it to tap more regulated markets such as the US in the long run.


For now, India is definitely the focus market.

Know Brabo Available in payloads of two, five and 10 kilograms Performs ‘pick & place’, materials handling, CNC machine tending, press tending, vision and inspection, assembly operations Has a flip back capabilities and 360 degree rotation  Operates on a single phase 230V of power supply  Flexible interface for mounting of tools, grippers, sensors, etc  Rs 20 crore spent on developing indigenously  Only motor is imported; work is on to develop it locally  Priced between Rs 4.75-6.5 lakh  TAL claims buyer recovers cost in 15-18 months  What an operator does in 7 days, BRABO does in 2-3 days