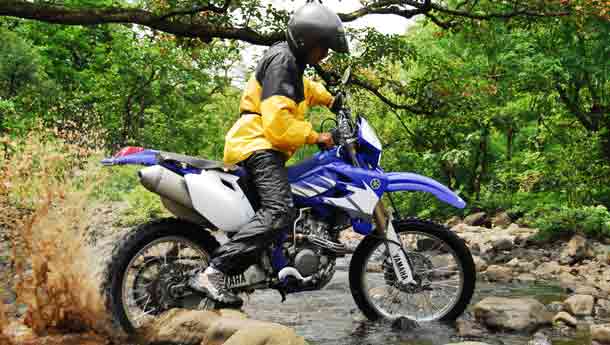 After two years of absolute mud-plugging madness at BSM’s favourite trail, Murphy connived with Zeus (no, not the little Suzuki) to make sure that we rain loving blokes at Motoring weren’t going to have any of it this time around. So the steady drizzle that usually seeps through our motorcycle gear was swapped with rivulets of sweat that trickled down the backs of our necks. It’s the middle of July and the monsoons are over, or so Mumbai’s ever-reliable Met department announced. And we’re en route to the wettest ride of the year. Indeed a cruel summer, innit?

We (read Shumi) had already been monitoring precipitation probability figures for the entire month and had drawn up a plan to out-Murphy Murphy, so to speak. Bijoy ensured that Shumi surrendered the Unicorn to him in exchange for the Apache RTR160. I was on the CBZ X-Treme. Not as many motorcycles as the previous year, but at least they would be capable given the fact that rain was eluding us, right? And if indeed the rain came calling, we invited the right machine and in the right hands too, to join us. So enter Rolls-Royce owner, Mazda Miata-lover and WR250F-commuting, ex-motocross racer, Amir Ali Jetha. He’s been in these pages with his magnificent cars, but for his first two-wheeled outing, we were going to throw him into the deep end of the pool... er stream.

So in true BSM fashion, we packed a load of sandwiches and stuffed our gopher Aditya, Govind – a colleague who’s just learning the joys of twisting the throttle – and Rohin into a car for their maiden maniacal monsoon ride. Arti, Shumi’s missus, rode shotgun with him (or at him) to exercise her shutter-happy index finger. Our course involved a fairly wide river crossing, with not so high water levels thanks to the receding rains, then a small stretch of forest to cross before hitting the top of our rocky trail and back to the other side. The second part of the course involved a timed obstacle course through trees.

Honda unicorn
Weapon of choice
As a hardcore commuter-biased 150cc motorcycle, the Unicorn’s well-built to a fault. Ultra smooth and refined, this Honda’s been Bijoy’s favourite 150 of all. Shumi’s been banging this motorcycle around Mumbai’s potholes and to the Honda’s credit, it shows no signs of wear, and our cribs about that stiff suspension might actually throw mud right back in our face through this course.

Progress report
The Unicorn led the convoy across, with Bijoy charting out the course, and did so without much drama. Bijoy’s agile throttle wrist produced minimal wheel spin on the Honda as he took it to the top of our trail. However, on the mucky obstacle course, Shumi complained about lack of traction, which could have been an adverse effect of the increased preload on the rear suspension that Bijoy had asked for.

Slide meter
The Unicorn’s the most docile and refined of the 150’s here today, but it proved no less capable. Honda’s engine rarely felt stressed and didn’t complain no matter how hard we pushed it through the rocks and steep banks. Such was the poise of Honda’s machine that it refused to rattle as much as a bolt through a course that left us in an almost drug-induced daze, with kaleidoscopes fixed to our eyes and cartoonish stars and tweety-birds circling around our heads.

Water chatter
The Unicorn was my first choice so that it would match my rain jacket. Just kidding. Easy on the highway and even when things got horizontal, there are few equals for it in the Indian market today. Just wish it looked more aggressive.

Hero Honda CBZ X-Treme
Weapon of choice
Hero Honda’s original sporty motorcycle in its new guise has got the grunt going for it, while ergonomics are once again track oriented. Shumi, of course, prepped the CBZX for our slushfest through his daily commute by slamming it through every pothole he found and bending both rims through one exceptionally deep one (Why do I have a feeling I’ll never hear the end of this? – Shumi). Now, evidently, the rims have the right contours to go over the rocks without getting stuck. It should have been easy for the CBZX to complete our course; with the new custom designed rims, it should be a cinch.

Progress report
I negotiated the water crossing on the CBZX by getting on the pegs and entering it at a decent clip, saving myself from the disgusting wet socks syndrome. Then, Shumi took her through the paces. He thought the CBZX managed very well even though it had fairly rear set pegs. The wide handlebars did the job, as they allowed him more leverage to steer through the rocks.

Slide meter
The tricked out Unicorn motor that powers the CBZX has far more grunt for the wring. A softer rear suspension allowed Shumi more stability through the slippery stones, but no extra traction. Over the
second part of the ride – the obstacle course – the CBZX recorded the fastest time, but not with Shumi on board. That credit goes to ex-MX-er Amir. But hey, we’re road testers, not off-road testers, right?

Water chatter
‘I was surprised that the lack of water made the course so hard, I though it would have been the other way around.’ – Shumi

TVS Apache RTR 160
Weapon of choice
Persuading TVS to send us an Apache RTR in time for an off-road ride took a bit of convincing. The RTR was built with just one vision in mind – racing. TVS had never intended that their flagship go off-road, cross a river, navigate a slippery, rocky and slushy forest trail and then get bashed though mutated melon-sized boulders. Our Apache RTR will probably be the first and only Apache to go mud plugging...ever.

Progress report
I wasn’t very confident of what the Apache would do while negotiating the mucky path after I took over from Shumi on the far bank. So I slotted it in second (last year, first gear saw me end up in a pile) and fish-tailed through the patch without much of a fuss. Our troubles had just begun, as the bed of rocks had transformed into a carpet of slithery moss and the RTR was spinning up and sliding about its own axis. This was the very place where I bashed the Suzuki Zeus’ cowl in last year, but the TVS’s bright yellow codpiece, surprisingly, stayed clear of the rocks. The side stand unfortunately snagged itself at many places, but needless to say I had a rocking time (sorry, couldn’t resist that).

Slide meter
The Apache RTR is the most performance-oriented motorcycle on sale in the country right now. But ground clearance, traction, and low down torque is what we need, along with the right kind of tyres. As is usual for our long-termers (including the commuter friendly WR250) all the bikes were wearing regular street tyres. So its low down torque was as useful as our rain gear on this ride. However, it was more than capable of following Amir and his hardcore off-roader even further off our already off-beat track. I don’t like to boast, but the CBZX and the Unicorn gave up and meekly took the easy way home. Or was it the riders?

Yamaha WR 250F
Weapon of choice
This, my friends, is the motorcycle for this course – a dirt bike with character, a big 250cc engine and 26 bhp at the rear wheel. Or so we thought. The WR250F has got its off-road setup, but Amir uses it to commute, it’s shod with on/off road, big-block tyres. But with 42 teeth on the rear sprocket and 2.15 kgm of peak torque, sometimes more is more than enough.

Progress report
Contrary to our opinions, the WR wasn’t a breeze through the whole course. The water section was a breeze, but once the slimy stuff cropped up, the WR was handicapped in the sense that it had way too much low down torque. Amir, with all his off-road experience, made us look like a bunch of jokers, but he still had his hands full. The WR had no issues with ground clearance, but that meant Amir had to precisely hop off one side every time he needed to get his feet down. Any miscalculations would risk having him and his gorgeous 250 flat on their sides.

Slide meter
On paper this machine’s the ultimate tool as compared to the other motorcycles in this shootout. But, at the end of the day, paper is usually swirled around in water and flushed right through. The brilliant setup, though, gave Amir the courage to venture through the path never travelled (which I followed up with the RTR 160), and emerge on top and out of breath while at it.

Water chatter
‘We’re in the wrong place on the wrong bikes on wrong tyres. This is not a test, this is sheer lunacy.’ – Amir