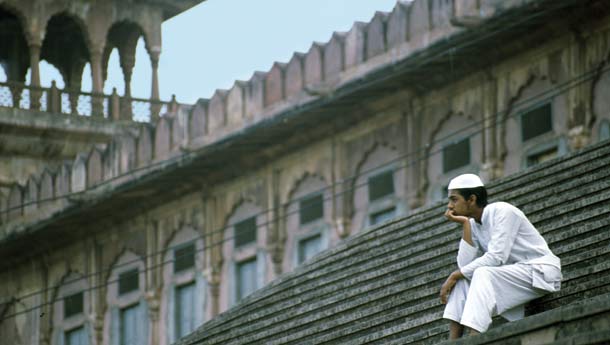 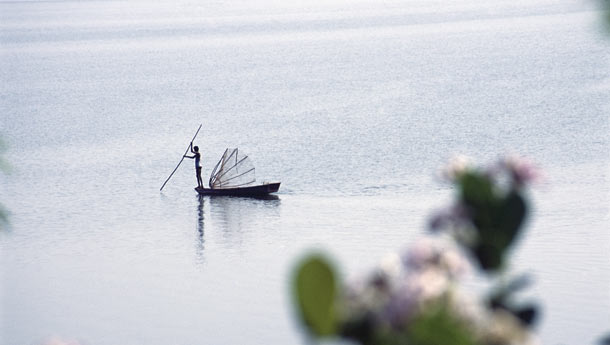 I suppose there are better ways to spend an evening (a fairly pleasant one at that) than to try and get into the Union Carbide factory in Bhopal, but at that particular moment I couldn’t think of one. Besides, I really did want to go in and have a look. It was a pretty morbid desire, admittedly, but I think that it would be near-impossible for a first time visitor to Bhopal to not have even a passing curiosity about the factory. I had in fact been rather hesitant about even mentioning the words Union Carbide, considering what had happened here, but the factory appeared to have become a sort of grotesque tourist attraction. This unsettled me. I mean, if I had lived through the disaster and someone turned up wanting to include it in their ‘things to see’ checklist, I’d probably want to rearrange their dentistry.

Anyhow, after driving right past the gate a couple of times, I pulled over and walked up to where a couple of hefty-looking fellows were indulging in a bit of exuberant back slapping. If it hadn’t been for the various bits of protest- graffiti (Hang Anderson! Anderson murdabad!) on the boundary walls, there was no way of telling that this was the site of the world’s deadliest industrial disaster. ‘Can I go in and look around? I’m a journalist.’ I asked the fellows at the gate. ‘Yes you can, but you need written permission from the Collector.’ ‘How long does the whole process take?’ ‘Oh, anywhere from ten days to a month.’ That took a sledgehammer to my plans, because I didn’t have that sort of time. I did the next best thing and asked them what it was like inside. ‘It’s amazing,’ they said. ‘You should see the towers and the machinery... so big and tall. Those people from the slums came and destroyed a lot of things inside, so now there’s a police party here all the time. We’re both part of it.’

‘Those people’ were the unlucky souls who survived the gas leak and happened to live in the tenements bang across the road from the factory. I say unlucky because by all accounts, and in one of life’s all-time cruel ironies, the thousands of people who died on the night of December 3, 1984 (and have continued to die since) were the fortunate ones. Those that survived and now live in all manner of agonies drew the short end of the stick - an end that’s been used to bludgeon the people of Bhopal from the day the plant was built in 1969. Most of us know that a lot of people were gassed to death in Bhopal, but not much else. It’s therefore worth repeating the sequence of events here, just so that the sheer enormity of the crimes committed by Union Carbide (UCC), the government of Madhya Pradesh and India and Dow Chemicals (who bought over Union Carbide) can be better understood.

The plant was never safe to begin with, having been built based on either untried or near-obsolete technology. A number of smaller leaks had already taken place before 1984, killing some of the factory’s own employees. An internal safety report made it clear the plant was polluting the entire area and was a disaster waiting to happen, but the bosses ignored the report outright and put cost-cutting measures through, severely endangering the already critical safety situation.

When the inevitable happened and 27 tonnes of methyl-isocyanate (MIC), hydrogen cyanide, mono methyl amine and other chemicals were released into the air, UCC officials sent in telegrams from the US claiming the cloud of gas was only like tear gas, a mere irritant and harmless - this while thousands of corpses lay all over Bhopal, and in full knowledge that MIC was in fact lethal. UCC’s chief medical officer at first recommended injections of sodium thiosulfate, a treatment that had proved effective, but UCC’s lawyers directed him to retract his advice precisely because the treatment’s success would imply that the company had been negligent. The state government forbade doctors from using the treatment and bulldozed a clinic that had been set up for the purpose.   UCC claimed that Sikh terrorists calling themselves Black June had attacked the factory. The claim was so patently false that they were forced to change their story to one of a disgruntled employee deliberately sabotaging the plant. They accepted ‘moral’ and not ‘legal’ responsibility in 1989 and agreed to pay out $470 million as compensation, as opposed to the original $3 billion figure. The Indian government didn’t consult any victims before agreeing to the lowered figure. UCC also demanded that they be absolved of all responsibility once the payment was made. Far from losing out, UCC actually made money off the settlement because their stock price went up when it was announced. Only about half the money has actually been paid out to survivors, and they had to recently brave an 800 km journey by foot to Delhi and the lathis of the caring Delhi police in order to secure a promise that the rest would be disbursed ‘soon’. Meanwhile, tonnes of deadly chemicals have been left in the open inside the plant for 22 years, poisoning the ground water, the soil and a whole new generation of Bhopalis. Dow Chemicals, when asked by the Indian government to clean the place up, effectively told them to go and f**k themselves.

Makes your blood boil, eh? It should. On my part, I was lucky that I discovered all these facts while researching this article; had I know beforehand, I would probably have tried to assassinate everyone involved, or at the very least I would have left Bhopal that very minute in disgust. That would have been a real pity, because if you somehow set aside the spectre of the factory, Bhopal is one of the nicest, most character-laden cities I’ve been to in a while. It isn’t your typical Indian small town from hell, where the overwhelming instinct after spending a few days is to find an open space and scream your lungs out. Bhopal is laid back and relaxed (except for a couple of thoroughfares in the old city, where it’s a miracle that people actually emerge alive through the chaos) and there’s an old-worldliness to it that’s instantly endearing.

Although the city was founded by Raja Bhoj in the 9th century AD, the first thing that strikes you about it is its distinctly Islamic texture. It’s there in the fine old mosques and buildings that dot the old city; in the flash of lively eyes as women lift up their veils; in the long beards and ever-so-slight hauteur of wizened old men; in the politeness displayed towards visitors. Nowhere is this texture more evident than in the monumental Taj-ul-Masajid (‘masajid’ meaning ‘crown among mosques’), Asia’s largest mosque. What it lacks in intricacy, it more than makes up for in sheer presence, towering over the city like some sort of sentinel. By a delightful contrast, India’s smallest mosque, the Dhai Seedhi masjid (or 2 1/2 stair mosque) lies directly across the road from it, having been fashioned out of an old rampart. A little known fact is that Bhopal has the largest number of mosques in the country, with an amazing 400-odd within the city, most of them built by women - this feat is apparently without parallel, and the sheer number of mosques places Bhopal among the great Islamic centres of the world, alongside cities like Cairo, Istanbul and Baghdad. This country never ceases to amaze me, I tell you.

Elsewhere in the city, you’ll find elegant buildings such as Sadar Manzil, Shaukat Mahal and even another Taj Mahal, built by Begum Shah Jahan, one of the many woman rulers of Bhopal. They’re all interesting mixtures of different architectural styles, and it’s a pleasure to walk around inside them, trying to imagine what they would have looked like when there were Begums and suchlike wafting about. One place where you’re certain to get a feel of the days gone by is the Chowk bazaar. It’s an absolutely fascinating place, full of little alleys and bylanes bursting with little shops selling bangles, attar, clothes, sweets and all sorts of other stuff. It’s best to come here in the evening, when it’s brightly lit up and there’s rows of stalls selling fantastic kababs and biryani for as little as Rs 2 a kabab and Rs 6 for a plate of biryani. Of course, you need a certain amount of nerve in order to overlook the hygiene aspect of things, but it’s worth the effort. Driving over to Bhopal’s massive lakes is a good way to round off the day. They lower temperatures in the city and it’s very peaceful to find a quiet spot next to them and enjoy the evening breeze. On the other hand, if you’re so inclined (and equipped), you could get on a big bike and blast up and down the superb roads going right around the lakes. I saw at least one Fireblade and what looked like a couple of old Ninjas tearing up the landscape one evening, proving conclusively that the size of the town doesn’t matter when it comes to bike-nuts in India.

I hadn’t expected to enjoy Bhopal anywhere near as much as I ended up doing. That’s a purely personal thing, because it really is the sort of place that will divided opinion neatly into ‘I hate’ and ‘I love’ categories. I strongly recommend you go and find out for yourself, because if you fall into the latter category (as I did), you’ll want to go there again. Just one thing: as you stroll around the lake, stuff yourself with great food or marvel at its monuments, spare a thought for those who weren’t lucky enough to be able to do the same.