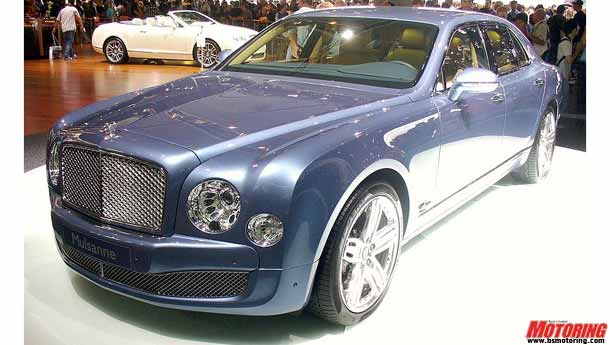 British super luxury car brand Bentley today said it will launch two models priced well above Rs one crore in the Indian market, as it looks to grow in the high-end segment.

The company today unveiled its top-end model 'Mulsanne', which will be tagged at Rs 2.9 crore. The car, powered by a 6.7 litre V8 petrol engine, will be delivered to customers from October-November.

"We will start global production of the Mulsanne in the second half of the year from our plant at Crewe (UK) and the first delivery in India will start in October-November. Besides, we will also launch our convertible GTC Supersport in India within 6-7 months," Bentley Regional Director (the Middle East, Africa and India) Chris Buxton told reporters here.

He said the company will produce 600 units of Mulsanne annually for the global market and the quota for India is yet to be decided, adding the company has received global bookings even for the year 2011.

The GTC Supersport was launched during the Geneva Auto Expo earlier this month and Buxton said the price of the car is yet to be fixed but is expected to be above Rs one crore.

Bentley expects the super luxury car segment in India to grow again this year, after the downturn in 2008-09, and that the sales will also pick up.

"India accounts for around two per cent of our global sales. On an average we sell around 25 (on a poor year) and 50 (on a good year) units in the country and we see volume increasing although the growth be slow," Buxton said.

He said with the introduction of the Mulsanne, Bentley is gearing up to compete not only with the likes of Rolls Royce and Lamborghini but also other super luxury items like yachts and private jets.

Bentley, which opened its first outlet in India in 1911, currently sells all its eight global models in the country. It has an outlet in Delhi and sales offices in Mumbai, Bangalore and Hyderabad.

The Indian super luxury car segment is of around 200-300 units. "For us sales in China are ten times more than India. But the Middle East, India and China are the fastest growing markets for Bentley," Buxton said.

Bentley used to produce the Mulsanne between 1980 to 1992 when it was discontinued but the new car will be entirely different from the earlier version.

The twin-turbo engine car is handcrafted at the Crewe plant and each car will require 660 man-hours to assemble, as compared to 5-6 hours for any other car.

He said the car will be available in 6.25 billion trims and colours, each car will be personalised according to the owners' requirement and have steel body and aluminium handle with a 220 watt in-car amplifier.