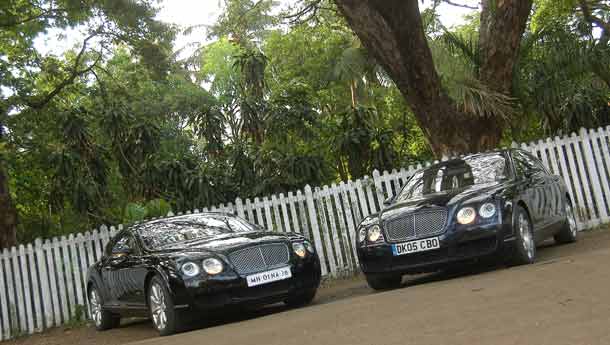 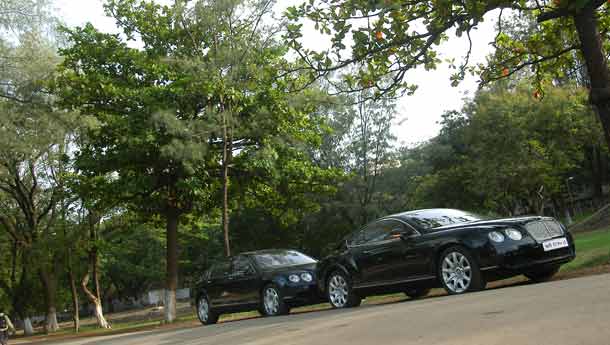 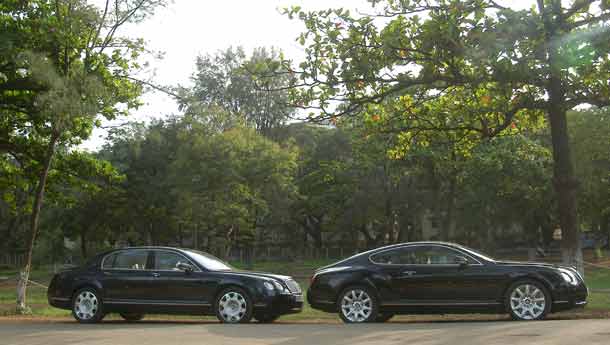 Tradition says that a supercar is one that goes very, very fast. And it does so because each and every component that goes into it is devised to make it attain some incredible speeds. So you get wind-tunnel designed engineering for the underbody, exotic carbon fibre bits, aerodynamic components to cheat wind, ground-hugging low-profile rubber, non-essential items binned to reduce weight plus, of course, a monstrous powerplant placed at the front or very often, amidships. So you get an automobile with a wedgy, stealthy look, which as the cliché goes, looks fast standing still.

But you know what? Bentley has made an obscene middle-fingered gesture to all the supercars of the world. And also pulled its bespoke pants down and mooned tradition. Because the two cars that you see here (in true BSM er, tradition, never seen together before) are the antithesis of everything a supercar stands for. Well, if you do want to nitpick, yes,they are powered by monstrous twin-turbo 12-cylinder engines that wouldn’t be out of place in a fighter plane, let alone mere automobiles. But the Bentleys look as if they would stop wind, rather than slip under it. And instead of exotic lightweight componentry, they feature luxurious wood veneer, the finest leather upholstery, a plethora of chrome gauges, switches and knobs, power everything, seating for four adults, plus all the fancy accoutrements that are deemed necessary in any car that wears the legendary winged-B badge.

So if you hold a traditional point of view, these are not what you’d call supercars, right? Let me give you two instances of how wrong you can be.In 2003, Georg Kacher, one of the best automotive journalists in the world, had an unforgettable drive in a Bentley. It was the then-new Continental GT – it was not just an ordinary coupé, but one that could literally fly between continents and yet treat you and your family like royalty. Kacher took the Continental GT to Ehra-lessien, a track in Germany, and did something unimaginable. He drove this luxury coupe flat-out and achieved 329 kph on the track!

To quote from Bijoy’s driving impression of the world’s fastest 2+2 production coupé in one of our earlier issues, ‘the ultra exotic and three times more expensive Porsche Carrera GT will only do the same! And this four-seater Bentley that weighs 2.4 tonnes will be only a second slower than the 1.4 tonne two-seater Porsche in the sprint up to 100 kph – and if that doesn’t speak for itself, nothing else will. I am sure that as and when Volkswagen engineers plonk this W12 into something lighter, you will be able to break the land speed record on a Sunday morning milk run.’   And then Bentley followed up the Continental GT with the Flying Spur.You just read about it, the fastest four-door production sedan in the world, in the earlier pages. But how do you know it’s the fastest? Well, like Kacher, a British magazine, for one of their recent issues, took a Flying Spur to the Nardo test-track in Italy to prove just that. Guess what, they managed an astounding 333 kph before the rev limiter kicked in and decided enough was enough. Only the McLaren F1, Pagani Zonda C12S and the Ferrari Enzo are faster. Oh, one small thing. Actually, one big thing. You can’t fit four fully grown adults in any of these supercars, while the Flying Spur achieved these supercarsonic speeds with four passengers on board, with the airconditioning/posterior warmers and other luxury paraphernalia fully functioning! The Flying Spur, along with its sister coupé, has proved that supercar performance and luxurious motoring are not mutually exclusive. And how!

Unfortunately, there’s no Ehra-lessien or Nardo for me,just Worli Seaface and the Bandra-Worli Sealink. Which I have to share with what seems to be a million other incredibly slow-moving vehicles. Still, with a collective 1,110-odd bhp available between the two cars, tell me, who on Earth would complain?

For all its understated looks, the Spur commands attention from everybody on the roads; not even a Mercedes comes this close to turning heads. The driver’s seat has a zillion permutations to make yourself comfortable in, and I guess I somehow managed to zero in on the seat position that suited me best. The luxury that surrounds me is unbelievable and there is a bewildering array of shiny chrome buttons and switches.

But with 552 horses emerging at 6100 revs and a wholesome 65 kgm of torque all yours barely above idling speeds from the 6000cc W12, you sure don’t need all those switches; that one sporty pedal is enough. Slam on it, and you’d better fix up an appointment with your favourite chiropractor and head to the medical shop to get yourself a neck-brace. Forget those torque figures, they are just numbers... you really have to feel that tremendous power surge, which pins your head to the headrest. From then on, it’s a never-ending wave of torque that simply overwhelms you. There’s so much of this stuff available on tap that you don’t even try to open it up halfway on public roads. Though WO Bentley would have appreciated much about this marvellous powerplant, he would have disapproved of having it turbocharged – WO simply preferred ‘calling for some more litres’ instead. Still, by massaging the W12 with two relatively small turbochargers instead of a single large one, Bentley has ensured that there’s virtually no turbo lag and the power delivery is seamless. Which is why, even with the gobs of torque available, the Spur is gentle and well-behaved with lesser automobiles that crowd around it in the Mumbai traffic. And while we are stuck at the signals, it’s a great place to be in too. The stereo system was staggering in its sound quality and we also managed to receive a hazy Doordarshan on the LCD monitor. Seriously!   Cut to the Conti. Unlike the Spur, which does not exactly stand apart in terms of design, the GT looks every bit a powerful British bulldog. Crouching on its powerful haunches, the GT to me turned out to be much more powerful and substantial to look at than in pictures. And in that shade of black, it looks sinister, something like the Hound of  the Baskervilles. Both the Bentleys are identical in most aspects, except of course after the A-pillar. The Continental is a pillar-less coupé, and is marginally shorter than the saloon, while its overall length is less by almost two feet. Surprisingly, the Flying Spur actually has a better coefficient of drag than the aerodynamic looking Continental!

Without a B-pillar and a neat sweep of the roof arch, the effect is that of sitting in a cosier environment and the coupé wraps itself around you. Now that I was quite snug, I really felt I could cross the Indian subcontinent over the next couple of hours. The drivetrain is common to both cars, and the whoosh you get every time you floor the pedal becomes increasingly addictive. Both cars, for the first time for the marque, get permanent all-wheel drive, which I think is a good idea, especially considering the wallop the engine can give you if you’re not careful.

The W12’s ‘prodigious power’ (as Bentley puts it), is despatched to the wheels via a six-speed automatic transmission engine-ered by the German firm ZF.While in the Spur the gearbox has been tweaked a bit to offer a relaxed driving sensation, it feels much more immediate in the Continental. But with so much torque available at so little rpm, it hardly has any reason to downshift. And even if it does downshift, the transmission is so smooth that only the rev counter gives the game away. Yes, I did try the paddle-shift out, but I felt it was more of a plaything, especially considering my surroundings. Give me the empty, curvy roads of Wales... then we’re talking.

So what will it be for me, in the rare event of having to choose between the two? The Continental GT can be yours for around Rs 1.65 to 1.70 crore, while the Spur is priced between Rs 1.75 to 1.80 crore. I think I’ll take the cheaper car. No no, just joking. Since I’d rather be in the driver’s seat rather than anywhere else in the car, it has to be the GT, there’s no doubt about it. It’s one of the finest driving machines one can buy anywhere in the world. The Spur, on the other hand, is for those generous lords who are willing to delegate such massive power to their chauffeurs and enjoy the peerless British rear-seat hospitality (heck, a chauffeur-driven supercar!). So be it the GT or the Spur, rest assured that even supercars would be hard-pressed to overtake you.