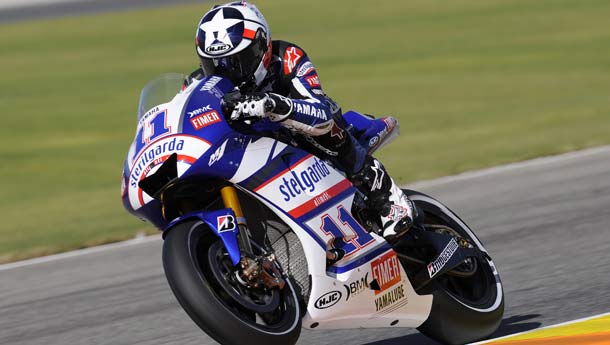 Even as Valentino Rossi and Co. vanished into the distance at the recent MotoGP round at Valencia, all eyes were on a certain wild card who's taken the motorcycle racing world by storm. A seventh-place finish ahead of factory Honda rider Andrea Dovizioso belied the fact that Spies had ridden the Yamaha M1 only for a total of three hours.

AMA champion from 2006 to 2008, Spies, nicknamed 'Elbows' after the way his elbows stick out while riding a bike, made the jump to WSBK last year and immediately surprised everyone by taking the challenge to veteran Noriyuki 'Nitro' Haga. After many a ferocious battle, the dust settled and Spies found himself with the WSBK trophy, the first rookie ever to win the championship and Yamaha's first-ever WSBK title. Along the way, he won 14 of the 28 races and set the record for most number of pole positions (11) and most consecutive pole positions in a season. Impressive is too mild a word, we think.

However, ahead of his first full season in MotoGP, the Texan was quick to dismiss notions of instant success, stating that it would take a miracle for him to get anywhere near the podium. Of course, the stakes and the speed are higher and he has the likes of Valentino Rossi, Casey Stoner, Dani Pedrosa and Jorge Lorenzo to contend with, but already his playing down of his chances is giving way. At the tests in Valencia this week, he climbed up to fourth place without making a single change to the bike, only opting to modify his riding style to the GP machine, a big change from the superbikes that he's been used to. And he's on a satellite machine that has got to give something away to the factory-backed racers. So we think it's safe to assume that Spies will be hassling the front runners on at least a few occassions, if not throughout the season. But we'll keep our fingers crossed for the latter. And knowing Spies, we're sure that he'll do everything he can to not disappoint us!