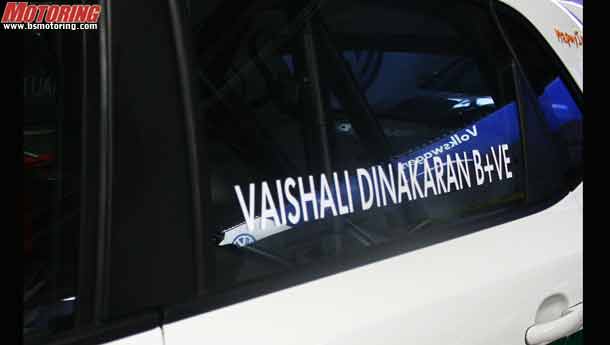 It's been a good month for me motorsport-wise. I took part in my first ever competitive motorsport event when I navigated for Aneesh in the Mahindra Monsoon Challenge. The TSD ran from Nashik to Goa, and boy was I stressed out by the end of it all. Even my tenth standard maths examination wasn't as harrowing an experience as this had been. It was like one of those wretched arithmetic sums - two trains head towards each other at such and such a speed, calculate the time by which the engine driver's hair goes grey. Except that in school, when I'd conveniently fabricate answers after throwing in a few +, - signs in between, no one got hurt. In this case, if I made stuff up, we'd end up lost in the middle of Maharashtra. That, of course, was not something either of us wanted. Especially given that at one point we had visibility of about 4 feet ahead of us and kept circling a cemetary. Anyhow, we came out of that alive, and in retrospect I will admit, if I'm given the opportunity to navigate in a TSD again, there's a good chance I won't turn the offer down.

The month got better, too. I was lying in bed with the flu when I got a call asking if I'd like to take part in the Volkswagen Polo R Cup Women's race. The next thing I knew, I was on a flight to Chennai wondering what on earth I was going to do at the track. There were going to be Formula BMW and Scirocco Cup drivers, not to forget the likes of Navaz Bhathena racing there. I had visions of myself flying off the track and landing in a tree somewhere beyond the barricades. This was going to be hard.

Turns out I was right. I've always known racing is plenty of hard work. But that judgement was always made when I was safely in front of a television set watching as helmets clanged around in the cockpit of a car that was clattering over kerbs. This time I was strapped into the driver's seat, told to floor the throttle, brake hard and always look deep into the corner, before being waved out of the pitlane at the Madras Motor Racing Track. Of course, I wasn't anywhere close to the pros, and there was an unfortunate spin during qualifying, but I made progress. I improved my own laptimes at the track by over 15 seconds during the course of the race weekend, and I learnt more than I thought was possible (watch out for the October 2011 issue of BSM for that story).

So would I do it again? Believe me when I say this - I can't wait!