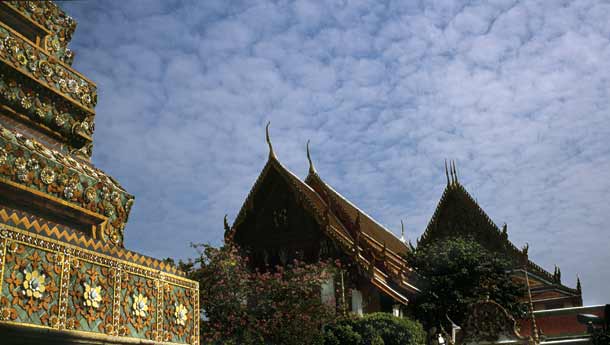 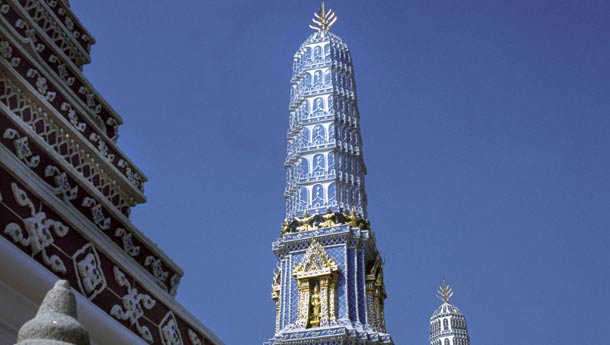 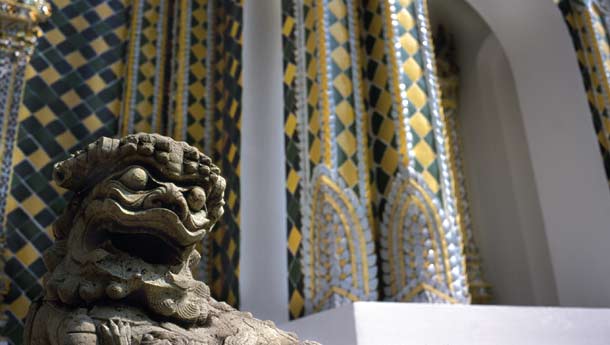 Wheelies are fun, as most of you will agree. There’s something deliciously satisfying about revving hard, popping the clutch and hearing yourself inhale sharply as the front wheel makes like it’s on Viagra. The element of danger, naturally, adds to the thrill; the chance that it’ll all go completely south and you’ll end up in a ditch adds a certain edge to the experience. And, of course, there’s the fact that you’re being a bit of a hooligan and thumbing your nose at the authorities (come now, this is no time to be politically correct). Oh yes, wheelies are definitely right up on my must-do list. Trouble is, they were top of the heap on my tuk-tuk driver’s list too.

A tuk-tuk, in case you’re wondering, is the Thai version of our autorickshaw - only it’s bigger, more colourful and much more powerful. They used to be all over Bangkok a few years ago, but have now become more of a tourist attraction than anything else. Apart from being visually arresting, a tuk-tuk also produces what is possibly the most glorious exhaust note on the planet. Think of an RD350 yelling its guts out, route it through the loudest Yoshimura can on the market and you’ll begin to get an inkling of its soundtrack. Indeed, on the way in from the airport I had been mystified by a surfeit of big-bike noises and a corresponding lack of big bikes, until the cab driver said they were all tuk-tuks. I decided right then that I had to get a ride in one ASAP.

One night, I decided to hang out at the Suan Lum night market, an eminently sensible concept that I wish existed in our country too. A bustling, lively pot-luck of a place, it’s where people in Bangkok head to when they want an all-night combination of shopping, great food and beer and all sorts of live performance art. Thankfully, the Thai government doesn’t feel the need to play Big Brother and tell you what’s not good for you, so you can safely wander around and have a blast without ‘culture police’ breathing down your collar. After a serious bout of overeating at the food stalls, I thought it might be wise to call it a night. Now, taking a combination of Bangkok’s superb Skytrain and underground metro, I could have reached my hotel in about 20 minutes, but I felt that a late-night tuk-tuk ride was called for.

I hailed one, whose safari-suit clad driver looked more like a middle-aged professor than a transporter of the paying public. Then again, Bangkok offers some amazingly cheap tailoring (3 suits, 3 trousers, 3 shirts, 4 ties for Rs 8,000 - I kid you not), so I suppose the safari suit shouldn’t have been a surprise. ‘Where you go?’, he grinned and enquired. ‘The Tongtara Riverview Hotel, please.’ ‘Aaah, Tong-talaaa Leeverview, I know, I know - 300 baht’. I wasn’t that  much of a dumb tourist, so I politely fought him down to the correct price and hopped in. ‘James Bond, James Bond, tuk-tuk - you see?’ I knew he was referring to the famous credit card ad,  but before I could reply, he revved the proverbials off his ride, dumped the clutch and pulled an outrageous mono. Had I not frantically grabbed the railings on both sides, I would have done a neat double-backflip through the open rear end onto the tarmac. As it was, I barely managed to cling on as he held the wheelie for a good 20 feet before bringing it down heavily and roaring off in a haze of two-stroke smoke. ‘Ha ha, you like?’, he asked as I tried to gather my wits. ‘Er, yes, but could you possibly warn me the next time?’ ‘Ha ha!’ he replied, screeching into a tight corner where I swear he must have got a wheel off the ground. The remainder of the ride went somewhat like this: ‘Oh my God that’s too fast we’re going to die *%#* phew that was close noooo we’ll never make that turn Holy Mother of God! @# help are you sure you want to do that!%**# please let me live.’ When we got to my hotel, I gratefully leapt out, wild-eyed and with my brain pinging off my skull. I realised that for all his pyrotechnics, this dude knew how to handle a tuk-tuk and that the ride had been a hell of a rush. On an impulse, I asked him if he would come back the next day and give me a tour of the city. ‘No plobrem! Ha ha! Tomollow  dwive slow!’ ‘That would be nice’, I said, although ‘slow’ was probably a relative term to him - relative to a land-speed record, or perhaps a speeding bullet. ‘Tomollow’ would be interesting, to say the least.   ‘Where you wan’ go? Bangkok vely big. Ha ha!’ Niran (for that was the madcap’s name) was right in more ways than one; not only is Bangkok immense in terms of physical size, its traditional Thai name is a record-breaking Krungthepmahanakorn Amornrattanakosin Mahinthrayuthaya Mahadilokpob Noparat Rajataniburirom Udomrajanivej Mahasatharn Amornpimarn Awatarnsatis Sakataditya Wisanukamprasit. Several tourists must have dropped dead of old age trying to unleash that one, so somebody probably made the sensible suggestion that Bangkok would be easier on the tongue. It isn’t an ancient city when compared to some of ours, having been built in 1782 when King Rama I moved his capital from Thonburi across the Chao Phraya river - the idea being that the river would act as a natural defence mechanism against enemies. He needn’t really have bothered, because Thailand proudly remains the only South-East Asian country never to have been colonised.

Instead, most of Bangkok’s invaders over the years have been of a slightly more benign (although this debatable) nature - tourists, fast-food chains, gargantuan shopping malls, skyscrapers and superfast expressways. Like a lot of big Asian cities, it’s a bit schizophrenic in nature. On the one hand, you have areas like Sukhumvit, chock full of modern glass and steel buildings, malls, hotels and every designer name you can think of. But bang next to all the modern trappings, you’ll find dinky little markets, rows of street-food stalls and shops selling everything from chickens to scrap iron. In fact, as we blitzed through the city I realised that Bangkok is in many ways one gigantic department store. You can get bloody well anything here, and if you’re in the market for pirated DVDs and other knockoffs, it’s pure heaven. The best part is that everything is immensely good value for money; you don’t have to stand around converting currencies, because the rupee and baht are almost level pegging. Bargaining, in the sweetest and most polite manner, is the norm even in some big malls, so it’s an absolute bonanza for Indians.

However, Bangkok isn’t all about how fast you can empty your wallet (in case you want to know, speeds upwards of 1000 baht per minute can be easily achieved). If you hold a course along the Chao Phraya river, you’ll soon come to the Grand Palace complex on Rattanakosin island. Built in 1782, the palace is quite simply jaw-dropping in its oriental beauty. The whole structure (which actually consists of several different buildings) is covered with gold, glass and coloured tiles, so when the sun’s out it makes a literally dazzling sight. The palace also has a chapel, the Wat Phra Kaeo, with an amazing emerald statue of the Buddha and it’s the most revered in all of Thailand. The ticket to the grand Palace also gets you into the Vimanek Mansion, another incredibly beautiful building made entirely of teak (the largest wooden building in the world, actually), which is now a museum. Backtrack a bit and you’re at the Wat Po, Bangkok’s largest temple, which has a stupendous 46 meter-long reclining Buddha covered in gold leaf. It was also Thailand’s first university and is the best place to experience the wonders of a traditional Thai massage (trust me, you’ll feel like a new person). Almost directly across the river from the Wat Po is the Wat Arun, or the temple of the dawn, with an imposing 70 meter spire. You’re no longer allowed to climb to the top, but it’s worth a visit, especially at night when it’s beautifully lit up.   Bangkok by night has several other attractions, most of them considerably less spiritual. Niran was downright insistent - ‘We go Patpong, Soi Cowboy, girly-bar! Is good, ha ha!’ Now, Bangkok’s nightlife has a reputation for being a bit rowdy, and there’s no doubt that areas like Patpong and Soi Cowboy aren’t exactly Disneyland. But at the same time, it’s perfectly safe and quite laid back. It’s worth going to some go-go bars just to check them out, although they can get monotonous pretty quickly. In any case, there’s much more to Bangkok nightlife than g-strings and pole-dancing. It has some of the best jazz and blues bars I’ve found, apart from some truly superlative restaurants catering to every palate. Like its shopping, everything is excellent value - a similar night out in any European city (or even Mumbai or Delhi) would have you taking out a second mortgage, but not here. I soon realised that I was hopelessly hooked by Bangkok’s charms. Here was a city that was modern and traditional, clean and polluted, organised and chaotic, sleazy and safe and virtually every other contradiction I could think of. It was one big buzz, and I savoured it for as long as I could.

It was almost four in the morning when I decided to call a halt to the hedonistic excesses, and I literally had to drag Niran away from it all - the man was a veritable Energizer bunny. I slumped wearily into the back seat, hands ever ready to grab the rails. ‘You like Bangkok, no? I know you like, ha ha!’ ‘Yes, Niran, I absolutely love it’. ‘Wait, I do wheelie fo’ you!’ I was about to protest, but then I realised it was pointless. He had already revved it to breaking point, and besides a massive wheelie seemed like a good way to end what had been one of the most enjoyable days I’ve had in a while. I sucked in my breath, gripped the railings  and waited.

Bangkok is undoubtedly one of the world’s most fascinating cities. In its mix of the old and the new, you’re sure to find something that catches your fancy. It’s shopping heaven for those so inclined, with a bewildering array of stuff to splash your cash on. If you’re a foodie, there’s no better place to go – the street food alone will have your head swimming for choice. Vegetarians, however, are given the short end of the stick – even the veggies are usually cooked in fish sauce! There are enough temples, palaces and museums for those looking for a spot of culture, and if all you want is a naughty weekend – well, you know where to go. From Bangkok, you can make day trips to Ayutthaya, the ancient capital, and to Kanchanaburi to check out the famous River Kwai bridge.

The city probably offers some of the best-value accommodation anywhere in the world. Backpackers should head to Khao San road, where you can get a bed for as little as Rs 250 a night. Even a three/four star room, with aircon, tv and all the modcons can be had for Rs 850 onwards, including breakfast. Check out thaipro.com for a comprehensive list of Bangkok hotels, and you can book online too.