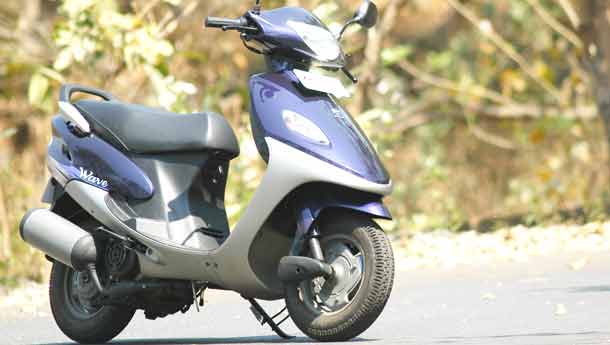 The Bajaj Wave is a middle of the lot Scooter

The Wave has been around for a almost an entire year now but it's not what one would call a success story. Where the Pulsars and the Discos have grabbed a lion's share of the attention the Wave has struggled to make an impact in any sense.

DESIGN
This has been said before but we'll say it again. The Wave suffers from a 'deja vu' syndrome. So no matter what the changes are under the skin, on the face of it, the Wave looks like yet another paint job. Which is a bit sad because there are quite a few changes. On the face of it though the Wave gets a two tone theme, clear lens head lamp, a new tail lamp and a rather big exhaust that try hard not to remind you of the Saffire, but don't succeed too much. Unfortunately in case of the Wave it's a bit too little too late.
6/10

MOTOR
The Wave is yet another product to come out of the Akurdi plant with a twin-spark head but what it does leave behind is the characteristic DTS-i clatter. So refinement levels on the Saffire are better than any other DTS-i machine. The Saffire's 110cc engine puts out 8.1 bhp at 7000 rpm while torque stands at 0.9 kgm at 5000 rpm. That incidentally is higher than both the Hondas but less than the Nova 135. The Saffire's CVT does a rather decent job of transferring power to the rear wheels and has an extremely linear response.
7/10

NUMBERS
The Wave hits 60 kph in about 11 seconds while top speed is around 82 kph. But unless your daily commute includes a decent open stretch, you won't be doing those speeds too often. That's because progress on the Wave beyond 70 kph is slow. Having said that, the Wave is quite fun-to-ride in a point and shoot kind of way. In terms of fuel efficiency the Wave will return 45 kpl for every litre of fuel.
5/10

DYNAMICS
The biggest redeeming feature of the Wave is its ride quality. The biggest of bumps that would throw any other scooter off line are invisible to the Wave. The Wave gets a leading link on the front and a trailing arm at the rear. Around corners, the Wave is well composed but things get a bit jittery once you start getting closer to the tarmac.
6/10

VFM
The Wave is yours for around Rs. 33,000 and for that you get a two-year, 30,000 km warranty. For that you get a capable scooter with fit levels that aren't up to scratch. Bajaj products are always value for money and the Wave is not too different in this respect.
6/10

VERDICT
All things considered the Wave is an average scooter at an average price. And that, in essence is it's problem. The Wave suffers from being mediocre in every respect and the fact that it even looks very run of the mill doesn't help. Although if you are waiting for a Bajaj twist-and-go you needn't loose hope just yet. Because going by this year's Auto Expo, the Blade which is based on the Wave but will get a snazzier set of body panels should be out in 2006. Till then, either of the scoots from the Big Red is what you should be getting.

RIDER CHANGE
I used to like the Saffire for the way it looked until the Dio arrived. I couldn't believe that we could buy the same scooter which Rossi used in the pits. That alone seals the Scooter debate for me.
- Joshua Crasto