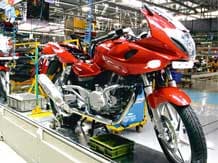 In a key move to break the strike at its Chakan plant, Bajaj Auto on Tuesday decided to shift manufacturing of its best-selling Pulsar bike to its Aurangabad facility.

Following the decision, the production of 70,000 Pulsars per month will now be at Aurangabad, while 10,000 units - of the Avenger, KTM and the Kawasaki - will continue to be made at the troubled Chakan factory.

To be able to handle the huge production moved out of Chakan, Bajaj is shifting 200-300 workers from its Pantnagar plant to the Aurangabad facility - to exclusively make the Pulsars. At Pantnagar, where the company produces between 100,000 and 120,000 bikes every month, the shortfall of workers will be made up for by hiring new trainees. The recruitment process has already started.

To handle the Chakan plant crisis, the company's top management took the crucial decisions at a meeting attended by Managing Director Rajiv Bajaj, Chief Operating Officer Pradeep Srivastava and Vice-President (Manufacturing) Kailash Zanzari, among others. While a spokesperson for the company declined comment, sources said the decision could be implemented by the end of July.

At present, Bajaj produces over 350,000 bikes a month across its three plants - 80,000 at Chakan, 150,000 at Aurangabad and about 120,000 at Pantnagar. After Chakan's production load is shifted, Aurangabad's total output will rise to about 230,000 bikes a month. Tuesday's decision will ensure that Bajaj does not lose production and is able to serve the market, despite labour problems.

On Tuesday, as the strike at the Chakan plant entered its eighth day, only a third of its 1,500 workers reported to work. Against the normal daily capacity of 3,000 bikes, only 1,200 two-wheelers were produced. 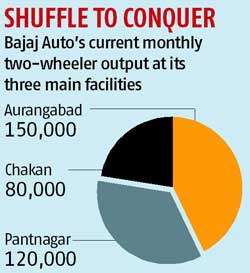 The management has alleged that union leader Dilip Pawar has resorted to intimidation and pressure tactics and is not allowing workers to come to the factory. Pawar, who has made several demands, including issue of 500 shares to each worker at a highly discounted rate of Rs 1 and a 25 per cent increase in wages, represents the union at Bajaj's Akurdi plant. According to the management, he has been trying to muscle his way into the Pantnagar and Chakan plants.

Nearly 25 years ago, Pune had seen a similar battle at Tata Motors (known as Telco then), when union leader Rajan Nair had organised a strike. However, Ratan Tata, who had become the company's chairman only 15 days earlier, had refused to negotiate with the outsider.