Bajaj Qute RE60 Spied Testing once again: Launch Near

Bajaj Qute RE60, the first four-wheeler from homegrown automaker has been in development and testing phase for quite some time. Now once again the new RE60 quadricycle has been spotted being tested and this time in Jaipur, Rajasthan. This indicates that the launch of the vehicle is near. Although, the vehicle was unveiled globally in September, its official launch is still pending in India. The exclusive pictures show the four-wheeler in full flesh. Bajaj RE60 will be launched in multiple colour options as the spy shots indicate. Though as per the shots, we can as of yet, only see blue and red coloured vehicles running on the roads. A yellow colored Qute was also spied earlier. 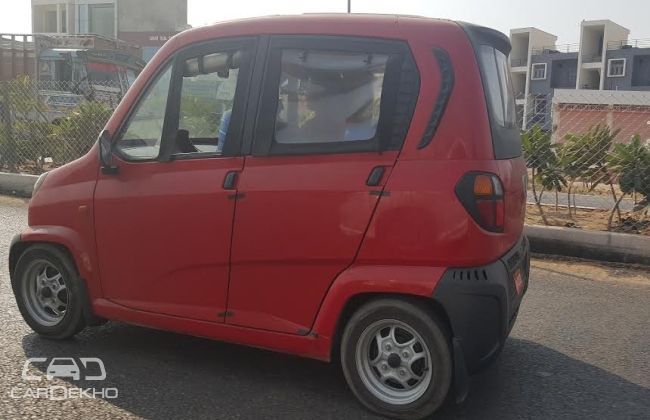 Bajaj Qute will be sold initially in 16 overseas markets, with Turkey being the first market to receive the quadricycle. The vehicle is being locally produced and is the first indigenously made quadricycle to comply with strict European Quadricycle norms and having received certification from European WVTA (Whole Vehicle Type Approval).

Talking about the specs, Bajaj Qute is powered by 217cc DTSi engine that produces 13.5PS and 19.6Nm of torque, paired to 5-speed manual transmission. In terms of fuel economy, Qute is able to deliver mileage of 36kmpl, which is fantastic for a vehicle like this! Although, the top speed is limited to 70kmph. Moreover, icing on the cake is that the quadricycle is offered in petrol, CNG and LPG variants. Pricing is yet to be announced by the automaker as the vehicle is awaiting Supreme court’s order for sale in India. We can expect the price to be around Rs. 2 lac.