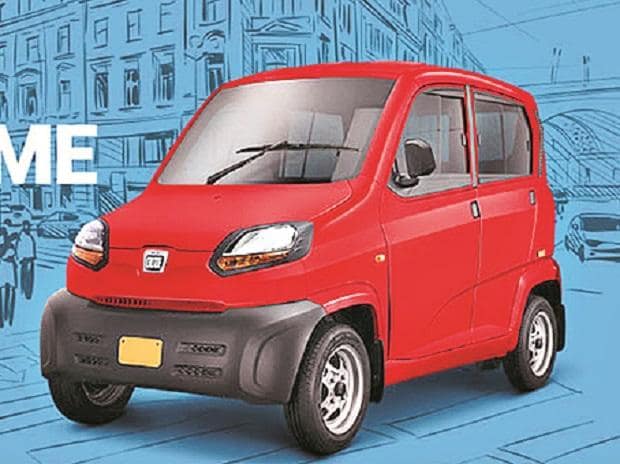 The Bajaj Qute, which has been the lone product offering in the quadricycle segment, will soon have company.

The government’s notification on the vehicle category and a lack of safe, low-cost transport solution that can plug the last-mile connectivity has prompted automakers to revisit their quadricycle projects.


Mahindra and Mahindra, one of the first companies after Bajaj Auto to have showed keen interest in the quadricycle segment, is evaluating the market for its offerings UDO and Atom. Others such as Tata Motors, too, is studying the market for a presence.


Mahindra showcased the UDO and Atom at the Auto Expo earlier this year in New Delhi. The concepts are being test-marketed, said the company's spokesperson.

"Mahindra is keenly observing the developments in last-mile mobility space. We did showcase a few concepts such as UDO and Atom at previous auto expo, which evoked tremendous response and they are being evaluated for market feasibility," said the spokesperson.


Quadricycle as a vehicle category was a subject of controversy till the ministry of road transport and highways paved the way for it in June and allowed them on Indian roads, drawing curtains on a long battle between Bajaj Auto and automakers. It defined quadricycle as a vehicle of the size of a three-wheeler but with four-tyres and fully covered like a car. It has an engine like that of a three-wheeler. Adding more heft to it, on November 23, it also allowed the vehicle to be used as a passenger vehicle by notifying an insertion of the item 'Quadricyle' as a 'non-transport' vehicle under the Motor Vehicles Act 1988.


“In the entire automotive industry in India, all the other categories of vehicles, including scooters, motorcycles, and cars, were allowed to be used for both personal and commercial use. Quadricycle was the only category that didn't allow it to be used as a personal vehicle. There was an anomaly that has been corrected now," Rajiv Bajaj, managing director, told Business Standard, in an interview last week.  Bajaj is now working on a Qute variant that can be bought for personal use.


Though the company expects people from various segments of the market to consider it, he said he would be surprised if personal vehicle becomes a big component of this vehicle. “ We have always said that the main merit of this vehicle is that it's a three-wheeler with four wheels, doors and seat belts that gives 30 kilometres in a litre," said Bajaj. The optics of price to value becomes attractive only when it's driven for 100 to 200 kilometres, he added.

An official at Piaggio said his company, which had shelved the quadricycle project in the absence of any government specification on the category, is re-evaluating it.


“We are in the process of evaluating the project and should have an answer on our plans in three to six months," said the official, declining to be identified. "Globally, Piaggio was the first to come up with a quadricycle offering. We are evaluating and should be able to close it in the next few months," he said.

Price value proposition will be the key determinant of the success and potential of quadricycles in India-both in the personal and commercial vehicle segments. He didn't rule out the possibility of Piaggio considering the passenger vehicle segment should its internal evaluation favour a presence in the quadricycle segment.