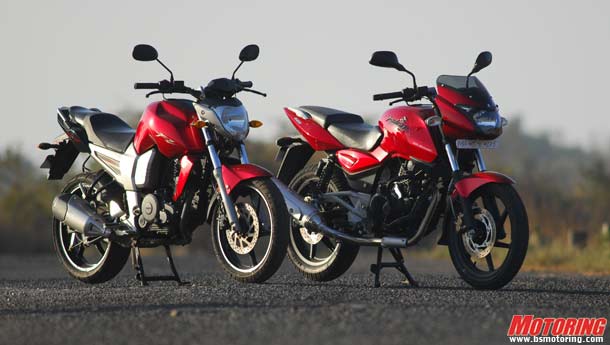 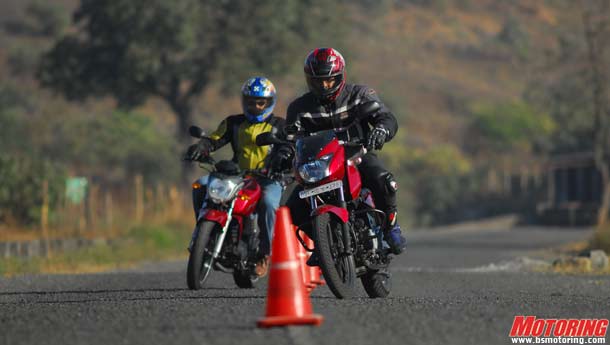 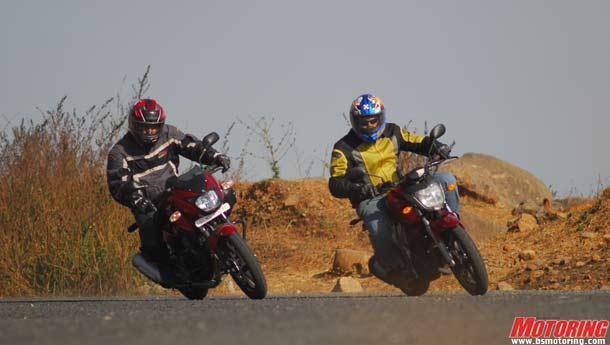 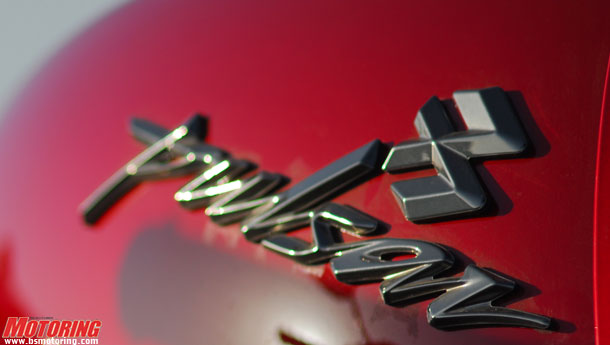 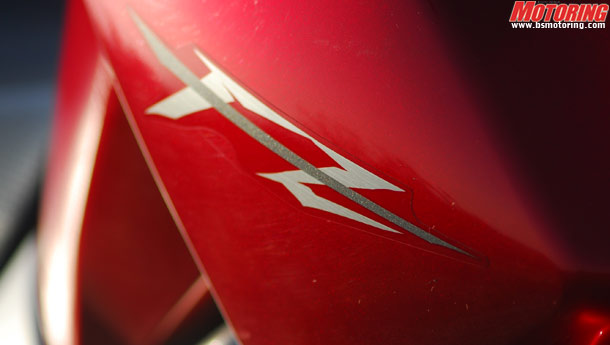 Streetfighters are really something, aren't they? Dedicated supersports guys are seduced and hardcore touring chaps think twice when a naked, upright motorcycle is to be considered. Needless to say, every biker worth the salt in his jacket holds this breed of motorcycles in high regard. And in India, they're hotter than ever. The Bajaj Pulsar can be credited with starting the streetfighter trend in India, though Yamaha reinvented the Indian streetfighter with their sizzling FZ16. Ever since the FZ arrived, people can't seem to get enough of it. However, there's a new kid on the block. Ok, 'new' might be stretching it, but the naked Pulsar 220 is Bajaj's latest attempt at hotting up the Indian streetfighter segment. So what happens when you throw them in the ring together?

ROUND ONE: LOOKS AND SPECS

What is the streetfighter formula? A muscular body, fat tyres and suspension, and a generally mean attitude. Both of these bruisers have these essential traits, but there's no mistaking the looker among the duo. The FZ16 looks like it has the bull by the horns and is beating the bovine creature silly with its rippling muscles. It is one of the best-looking motorcycles India has ever seen and makes the P220 look so 20th century. It's the FZ's silver 41 mm front forks against the P220's blacked-out 37 mm units, 267 mm rotor against 260 mm and 230 mm front and rear rotors, 100/80 front and 140/60 rear rubbers against 90/90 front and 120/80 rear hoops. And there's little fight the Pulsar can put up. Even when you sit on the FZ, it feels more brawny and substantial than the Pulsar.

Round one to the FZ for flexing its shapely muscles, then.   ROUND TWO: PET-TING IT

Now, with a 7 bhp advantage, the P220 was always going knock out the FZ in a traditional fist fight. So, we decided to take away the performance advantage of the P220 by setting up a tight Performance Evaluation Track (PET) layout that would focus on handling, a streetfighter's forte. It's a simple layout - a single line of cones, starting with a slalom through four cones and accelerating hard until the fifth one, which you circle twice before tracing your way through the slalom again on your way to the start/finish point. To make it a bit more interesting, we did it all on a gravel-laden stretch of tarmac to judge the level of feedback from tyres and suspension setups.

First off was the FZ, a motorcycle that's light on its feet and surefooted at the same time. Acceleration off the start point was not exactly earth-shattering, but enough to necessitate a dab on the front lever before entering the slalom. Once between the cones, directional changes on the FZ are as graceful as a belly dancer's waist movements. The upright stance and wide 'bar give you enough leverage to put the fat tyres' grip to good use. Positioning the bike on the imaginary line in my head was a cinch and any realignment or correction was just a nudge on the 'bar away, with the FZ throwing no tantrums no matter how hard I pushed it. After the slalom, it was time for yet another spurt of acceleration to reach the two-circle cone. It's turning radius is not as wide as I expected and the FZ made short work of the two circles before going through the slalom again and darting back to the finish line. The FZ's three runs were timed at 25.4 sec, 25.8 sec and 24.8 sec.

Even as I lined up at the start on the P220, I knew it was going to be tough. Whacking the throttle open as Kyle gave the signal (a little jig, heh heh), the rear spun up as the front wheel lifted slightly - wheeee! Braking for the slalom, I bungled up the entry by braking too much, resulting in twisting the throttle instead of maintaining a constant throttle, and I rocking horse-d my way through the cones. In the subsequent two runs though, I managed decent entries and went through the cones without any drama. Even so, the P220's extra 13 kg and 15 mm longer wheelbase made it lazier than the FZ in the slalom. That's not to say it was slow - the P220 carries its heft with grace and poise - just don't ask it to change lines in a hurry. Rocketing towards the two-circle cone, no matter what line I took, the yawning turning radius would slow me down every time, as I tried to avoid running of the road and very nearly lost the front on one occasion. The P220's three runs took 27.2 sec, 26.0 sec and 26.2 sec.

The FZ dances like a butterfly and wins round two by 1.2 seconds.   ROUND THREE: TWISTY ROADS

Since there's a life beyond PET tests, we took these two to a set of twisty roads to see how well their motor/chassis/suspension combinations come together. Again, the FZ reinforced itself as a quick and nimble handler, and its ride quality also impressed. The front disc has good feel through the lever, while the tyres grip well at all speeds. Above all, the FZ has a certain feel to it in motion that only a refined motor and substantial suspension/rubber combination can provide - quite unlike any other Indian bike. If only it had more power. 13.8 bhp and 1.38 kgm are just about enough to hustle the bike to 60 kph in 6 seconds and register a top speed of 108 kph. However, the trick with this bike is to gain momentum and hang on to it for dear life, letting the capable suspension handle everything else.

After riding the P220 with the Eurogrip tyres last month, I wasn't convinced and asked Bajaj to provide an example with MRF Zappers, which they did this time around. And after having ridden it hard with the Zappers, I can say that there is a world of difference to the P220's handling. It now sticks to the road without letting go even under hard braking. Even gravel on corners didn't deter me from trying to lean it as far as possible, something I wouldn't dream of on the Eurogrips. Here, with higher speeds thrown in, the longer wheelbase and additional weight makes the P220 more stable than the FZ - quite something, since the FZ is in itself an extremely stable motorcycle. What the P220 doesn't have is the quick-flick nature of the FZ, though the Bajaj certainly rides better. Motor-wise, this bike is a bomb. You've got 20.75 bhp and 1.94 kgm to burn rubber with, and even though the bike weighs 150 kg, you hit 60 kph from standstill in 4 seconds flat and get a top whack of 125 kph. It simply shoots away from the FZ even with an upright, heavier rider on board, making the crouched rider on the FZ look decidedly funny.

Knock out! The P220 finally stings like a bee and wins for its thrilling on-road performance.   WINNERS CIRCLE

So there you have it. Just one opening was enough for the P220 to knock the FZ's lights out. To recap, the FZ offers modest performance, but will keep you happy so long as you keep within city limits, it's more efficient, it has the quality factor going for it and of course, it looks like a million bucks. The P220 is one of the fastest Indians, overall quality is decent but could have been better and of course, the looks are as uninspiring as your old girlfriend/boyfriend. Nonetheless, I still think it's the best-looking Pulsar ever made - it's just not as handsome as the FZ.

At Rs 71,180, the Pulsar 220 packs the biggest PFM (power for money, much more satisfying than VFM) punch. The FZ, on the other hand, is priced at Rs 68,270 and you can't really go wrong with it. Time for another split decision then - if performance is your holy grail, the P220 is what you want. If style and handling do it for you, the FZ16 has what you're looking for. But the wait for the ultimate Indian streetfighter continues. Who's going to throw the P220's motor in the FZ, then?