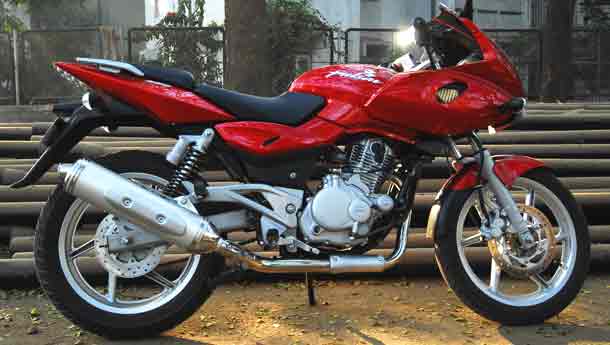 Since the Bajaj Pulsar 220 DTS-Fi obviously breaks the mould, I guess I should as well. So, notice the opening shot. It is not an on-bike-scene, not a what-happened-at-the-shoot, not a bystander-said and neither is it the most common of them all we-have-been-waiting-for either. So far so good, eh?
Almost exactly a year after we saw the bike in Delhi, we finally logged significant real-world saddle time on the Pulsar. And it feels good. But not that fast. The first time I went around a corner, though, I discovered why. While I am yet to ascertain exactly how the bike manages this, it feels slower than it is. Which means when you go through a corner and classify it as a 63 kph corner, you actually just blazed through at roughly 88 kph (digital speedo, heh heh).

It’s a strange feeling. Until you blow past 110 kph or so, you don’t actually feel the speed of the DTS-Fi. After that, the wind blast lets you know how fast you really are going. Of course, in light traffic, you do notice that many machines get left behind a little too quickly and a little too easily.

Perhaps the biggest reason is that this is the most refined of all the Pulsars so far. It still isn’t quiet like a Karizma (I’m not complaining) but it is completely without any peg or bar vibes, has no harshness except just before the red light on the dash enforces a gearshift. It sounds like a Pulsar – familiar. At idle, I thought it was a bit louder than the Phantom or the 150, but that’s about the only audible difference.
Visually, the biggest break from the past is the fixed half-fairing. Unfortunately, almost everyone who approached us with a query (no, they weren’t the most clued-in motorcyclists we’ve ever met) first thought the fairing was a quality mod and only later grasped that they were looking at Bajaj’s biggest bike yet.
Their eyebrows, however, rose satisfactorily as we rattled off the long list of firsts and features in a faintly bragging sort of voice. But it did bring up a few interesting asides. For instance, one chap pointed out that if the tyres had a different tread, many more people would notice that they weren’t just fatter, but tubeless as well.

Another pointed out, and I agree partly with this, that it looked too much like a smaller Pulsar with a fairing and a 220 sticker. I think I’m a little disappointed that two of the biggest visual treats, the digital dash and the LED tail lamps, appeared first on other Pulsars, rather than on this one. Thankfully, everyone was clear that from certain angles, the bike looked great. Everyone thought it looked big. Which, truth be told, the bike is.

I already told you that on its own, the 220 belies its own actual speed. This is why the outstanding feature on the motorcycle, for me, is the dynamic package. This isn’t saying that its performance isn’t great, but that the handling, ride quality and braking leave a big impression. Despite the extended wheelbase, the bike feels very good in corners and among all the Pulsars, this one feels the most neutral and the most natural.

It will basically race off leaving everything else on sale in the country right now in its wake. Find a fast flowing road and prepare to totally trust the P220, and there is little any other Indian machine can do. The 220 tells you what is going on, does what you want it to do and is just amazing. Especially downhill, when the sensation of velocity comes into its own. Flowing downhill sections are pure pleasure.

Thankfully, it sheds speed with the same confidence and ability and braking hard-hard-hard even on bumpy or mildly distressed (Levi’s style) surfaces will not generate any dramatic moments. One should not forget the ride quality either. This too is extremely flattering. It approaches a gliding like quality, but returns feedback. When you suddenly find a bump covering the apex, you don’t have to back off at all.
Our test bike did have one niggle though. Look at the cornering picture closely and you will notice how close to the ground the center stand is. It decked out repeatedly, constantly and way, way before the feeler bolts had a shot at it. Raising the preload to full reduced the instance but did not cure the problem. I am told that the issue has already been taken care of.

Now to the engine. As I have said, it doesn’t feel as fast as it is. Performance aside, I’ve told you already that refinement levels are up high. Gearshifts are as light as a great souffle, neutral is as easy to find as cows in the middle of the road and the clutch release is as progressive as Sweden.

For those who came in late, and then were incarcerated in a dark room, blindfolded, gagged and tied up, here is a short, staccato list of features: digital dash with two trips, two stage dash illumination, low fuel-cum-rev limiter light; grippy tubeless tyres; powerful projector low beam; LED tail lamp; split seat (mysteriously, the seat release is not a key, you have to take off a side panel and yank on a loop of wire); fuel injection (marvellous throttle response and feel); elliptical section swingarm; O-ring chain; rear disc (Josh thought it felt drum-ish, which I like – I’d hate to have a disc-sharp rear brake); no kick start (finally); oil cooler; self-cancelling indicators (which take a bit of getting used to); engine kill switch (why brown?); cool folding mirrors; maintenance-free battery... it’s a fairly long list.

All of this means that the Bajaj Pulsar 220 DTS-Fi is an impressive machine. But we were truly gobsmacked when Bajaj unveiled the price. The P220 is just Rs 84,000 on-road Pune, which means roughly Rs 90,000 on-road Mumbai. EMR will remember that this is roughly the price we estimated back in August, which means a hell of a lot of motorcycle for the money.

I can see the motorcycle being a great mount for long rides, slow or fast. Its 4500 rpm composure at 70 kph is as great as the sense of urgency when booming along at 110 kph. It’s unexpectedly frugal, effortlessly fast and feels very natural. In short, I think it represents a shift in the way we look at Indian motorcycles. The DTS-Fi also introduces a whole bunch of features we haven’t seen on our bikes yet, and uses almost all of them to great effect (as opposed to having been added for bragging rights). We’re still quite cross about how long it’s taken to come out since its Auto Expo reveal, but the bike will (finally) be appearing at Probiking showrooms around India in short order. Withdraw those savings, people, and line up.

Ah, yes the lead shot. Well, it went pear shaped immediately afterward. Josh leapt clear, the bike went down with an almighty thump. We were all horrified. But then, the DTSFi came through with flying colours — no serious damage at all.