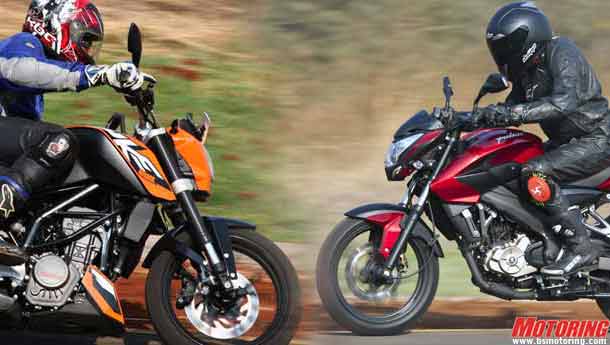 Both bikes that people have been waiting for for a long time. Both 200cc. Question is, if you were to go out and buy one tomorrow, which one would it be?

Looks striking, but we're not so sure whether we can call it pretty. The consensus is it's got a lot of styling elements from various popular Indian motorcycles (and some international ones too) but in a world where even the most striking designs begin looking dated in about two years, the Pulsar's distinctiveness may help its cause.

Attractive and how and has 'cool' written all over it in big, orange letters. It's a KTM, so it's typically sharp with a lot of chiseled bits. The headlamp is a vertically stacked affair with minimalistic plastic bits on the sides and the tank is chunky (11 litre capacity) without being a hindrance to the rider in terms of hanging off in corners etc. Best of all, the Duke's cycle parts and the motor are all so well-designed, they're as good as styling elements.

Triple spark plug technology, four valves per cylinder and a 199.5cc single-cylinder, liquid cooled motor that shares its bottom half with the Duke 200. The 200NS produces 23.4 bhp@9500 rpm (it redlines at 10,500 rpm!) and 1.86 kgm of torque at 8000 rpm. No fuel injection yet for the Pulsar but there is an all-new venturi carb doing service in the 200NS and we're not question its efficiency or performance. Bajaj claims 58 kpl in the Indian cycle, and while we think that's a bit optimistic, we'll only be too glad to verify. Oh, and there's an all-new 6-speed gearbox on the Pulsar, apparently taller than the one on the Duke, which means it will be more suited to long sprints.


A single spark plug is enough for the Duke 200's 199.5cc single-cylinder mill. The Duke boasts of better numbers - 25.48 bhp@10,000 rpm and 1.99 kgm@8000 rpm. That's delicious, when we're talking about a motorcycle that weighs just 136 kg! The 6-speed gearbox on the Duke 200 is short, tightly packed, which means you experience rapid acceleration in the first three gears, until things eventually calm down a bit. It's a punchy, involving engine that demands to be ridden with a heavy throttle hand and will reward you with lots and lots of wheelies. Tempted, aren't we?

Bajaj motorcycles are typically loaded with all kinds of features and the 200NS is no exception. A 280mm petal disc up front, 230mm disc at the rear, a Nitrox monoshock unit, digital speedo, the usual good-quality switchgear and its party piece – that pressed steel perimeter frame (like on, say, an R15) which means it's a lot more rigid (25 percent, say Bajaj) than earlier Pulsars and will definitely have much improved handling over its predecessors.

USD (upside down) forks, a multi-function display speedo console, chiseled swingarm, a disc each at the front and rear and that discreet exhaust positioned 'under there, somewhere' (also present on the 200NS, and is a massive weight saver) – the KTM Duke 200 has all that you need to be very thrilled about it, apart from that stonking motor.

Both are street hooligans (we haven't ridden the Pulsar yet, but this is certainly Bajaj's implication) and while the Duke is more so, owing to its conventional handlebar and trellis frame, both are going to be absolutely competitive motorcycles to ride around the track too. Pulsars traditionally have been sharp handlers albeit without the poise of an R15. This should be taken care of by the 200NS and we're very keen to see how it performs against its contemporaries. The Duke 200 is fast around corners, and very stable while at it and we'll be quite pleased if the Pulsar has a similar mindset.

At Rs.1.17 lakh (ex-showroom, Mumbai), the Duke 200 is definitely a steal. Although this is an introductory price so you would do well to buy one at the earliest! Bajaj has announced it will price the 200NS at less than a lakh, which means you get what is in many parts a KTM, with the usual madness of a Pulsar for less than R15 money. Now if that's not juicy, we don't know what is.