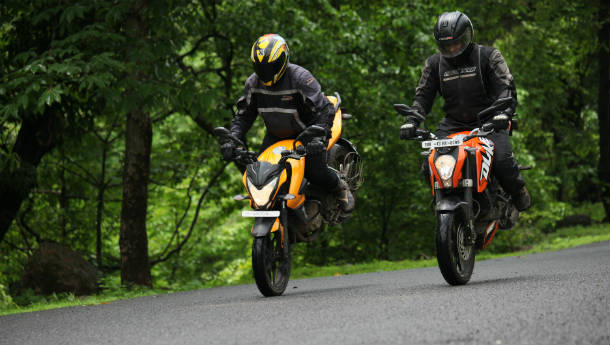 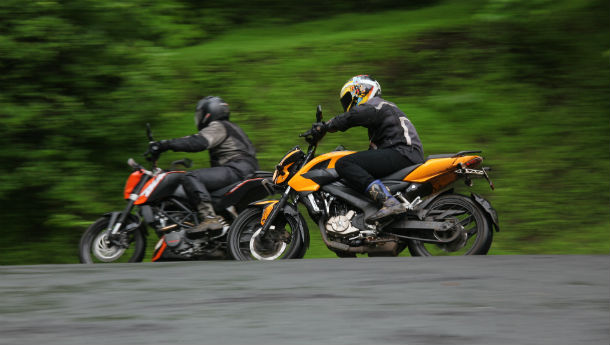 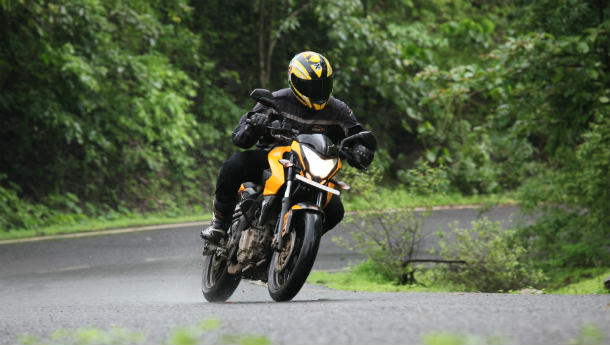 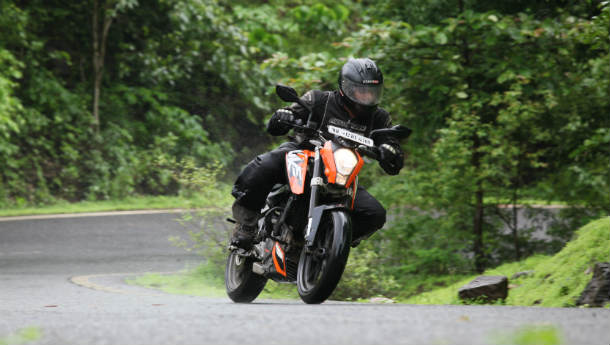 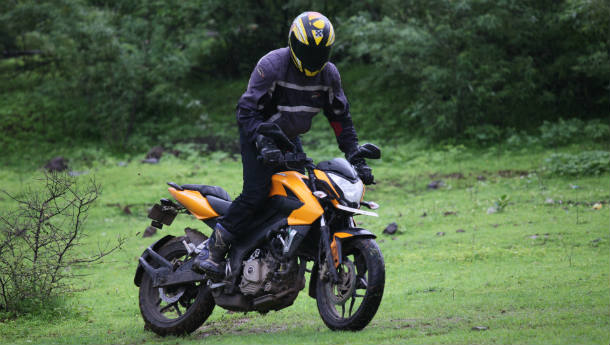 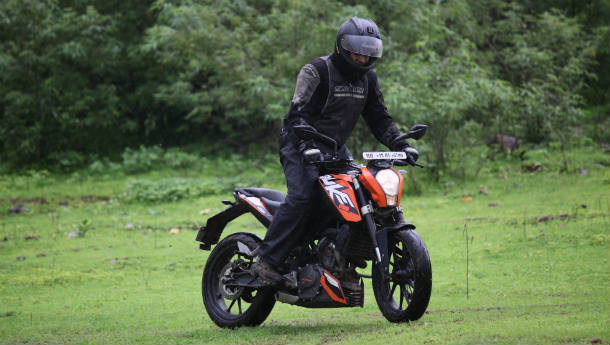 Tandoori chicken has its origins in Peshawar, Pakistan and due to territorial reasons, is now regarded as a fantastic Indian meat preparation. It’s a fiery orange hue, is spicy but not eye-wateringly so, and the meat, prepared elaborately in a tandoor, which is a coal-fired oven of sorts, is particularly juicy. Given the anatomy of a chicken, consumption of the dish in question requires some effort at the dinner table, but it’s part of the experience, really.

On the other hand is another lip-smacking preparation called butter chicken. A cream gravy prepared around boneless chicken, preferably, and usually paired with soft tandoori rotis – it is, given the varied demography of our country, aspirational food for many, and can’t-go-wrong-with-it food for the rest. Nice introduction to the KTM Duke 200 and the new Bajaj Pulsar 200NS, no?

Both are streetfighters, competent to the last nut and, needless to say, smashing in the looks department. The Duke looks radical and is a fibre-bodied shout-out to the stunt maniacs of the country. It’ll make a wheelie god out of you if you’re sincere enough – explains why Aneesh (that’s his bike in the shots – mine’s not stock) and I both own one. The Pulsar, on the other hand, is a striking answer to the prayers of the street racers of our country. It’s fast, it’s poised and the fact that I’m comparing what is essentially a ‘Pulsar', a word that’s become synonymous with performance, to a sharp motorcycle from a European powerhouse is proof enough of how much Indian motorcycling has evolved.

HOW SIMILAR ARE THEY?

Not very. How different can 25.4 bhp (Duke) be from 23.1 (Pulsar)? A lot, and swinging a leg over the saddle is the only way to find out. A large chunk of the 200cc single-cylinder is common to the two, yes, although I will go on to say that this is perhaps the most competitive utilisation of technology-sharing under one roof India has ever seen, perhaps even better than what happens behind the curtains at the Volkswagen Group office. Bajaj, by means of its 47 per cent ownership of KTM, has handpicked the best of resources from either party to create what are, no doubt, two of the most fun bikes you can buy in the country today. The KTM is torquier and more powerful, but uses that advantage early in the powerband. The Pulsar is (and does) the opposite. The KTM is rough and a bit vibey (no handlebar-end weights), while the Pulsar is refined without being numb. You may not necessarily like both, but you will like either. Smart move, Bajaj Auto.

The Duke is. A lot of the hardware, so to speak, on the Duke’s interface exudes finish levels that are familiar territory to some of the world’s finest motorcycles. If you walk over to a 690 Duke and take a look at the handlebar controls, levers and meter console, you will be surprised to see how similarly built the Duke 200 is. This is something the Pulsar lacks, but that’s a given owing to its much lower price tag. Even across the rest of the motorcycle, the Duke feels a lot more ‘premium’ to the touch. After spending a good few hundred kilometres in the Pulsar’s saddle, the best I can come up with is ‘the Duke feels like a scaled down 690, the Pulsar, a handsomely matured Indian motorcycle'.

WHICH ONE’S FOR THE STUNT MONKEY?

The Duke has all the right bits – USD forks, a stiff rear monoshock and a riding position that only reaffirms its stunting intentions. The handlebar is a bit high-up – it offers good leverage and unlike clip-ons, won’t break in the event of an outrageous stunt gone wrong. The footpegs grip well and are thoughtfully grooved (makes a massive difference in wet weather – a little bit of muck and my feet would slip dramatically off the Pulsar’s) and the overall feel from the levers and pegs is optimal. Add a wheelie bar to the tail, and you’ll have everything you need to be a YouTube celebrity. The only negatives are the toe-shifter and rear brake lever, which aren’t wide enough, and the handlebar grips, that do come across as a bit hard.

And that’s just the cycle parts. Rev the Duke up and pop the clutch in first – it wheelies with the eagerness of a seventeen-year old wanting to ‘find out more’ about Monica Bellucci. It displays poise no matter which end is up in the air and the better stunters amongst you will find the power graph of the Duke extremely palatable. The Pulsar, too, is hooliganistic, but less intuitively so (its mind is just too much on speed) when compared to the Duke. Give it more gas than your gut feeling allows, followed by a quick pop of the clutch, and the Pulsar will cover a lot of distance before you bounce off the rev limiter in first gear. However, if you think racing is passé, the Duke is what you’re looking for.

WHICH ONE’S THE TRACK SCORCHER?

The difference is simple – into the Duke’s chassis, Bajaj has dialled a good degree of communication, while the Pulsar gets a strong dose of effortlessness. So to answer the question I have posed, both are exceptionally focussed around corners, but the Pulsar makes you work less hard. It, hence, boils down to your riding skills. Leaned over into a fast sweeper, the Duke demands 100 per cent of rider commitment, whereas the Pulsar likes to be shown enthusiasm. In the city, the Duke is more game to flicks of the wrist, but through fast, demanding twisties, the Pulsar is more stress-free. That twin-spar frame on the Pulsar, combined with the really good tyres/brakes, makes it one of the neatest handling packages on any Indian motorcycle on sale right now.

Performance-wise, either bike is highly rewarding. On the Duke, things happen with a sense of urgency and if you’re precise with the shifter, you’ll hit the tonne mark in 8.9 secs. On the Pulsar, things are a little spaced out. To hand out the order of speedo indicated top speeds the Pulsar is capable of in each gear, it’s 50, 73, 94, 114, 129 and, finally, 136, beyond which lie a few extra kph that you can gain provided you’re light and have superhuman crouching abilities. I spent a large share of my Pulsar time shifting between third and fifth – extracting all that juice happens best here, and it’s fun. The sixth cog only adds that extra bit of top-end to the Pulsar’s performance but what’s interesting is that it spans roughly 90 kph, considering you can shift into top gear as early as 45 kph. If you want thrills but would rather not work too hard for it, the Pulsar should fit you like a glove.

The Duke is already very (un)popular in enthusiast circles for being punishingly stiff in the suspension department, and having clocked over 3,000 km on mine, I do have some unpleasant stories to tell my grandchildren. Hopefully, it won’t come in the way of me having grandchildren in the first place, if you know what I mean. However, I like stiffly sprung bikes as much as I dislike children, so the Duke suits me. I like the seat – both the cushioning and texture – and the excellent leverage the handlebar provides leaves me largely unstressed at the end of a long ride. The rear monoshock is adjustable for preload, so you can’t dramatically alter the damping characteristics, but the stiffness is only a clear reflection of focus, something the Duke has a lot of.

The Pulsar is stiff, too, but not as much as the Duke. It’s a lot friendlier over bumps and the gas charged rear monoshock performs far better over bad roads. On fast, bumpy roads, you can feel the Pulsar’s suspension working really hard – the Duke just tosses you around, instead. At the end of a fast Mumbai-Pune run on the Pulsar, I was not stressed at handlebar, seat, or footpeg and while the Duke produces the same results, there’s no doubt that the Pulsar is the comfier of the two.

The Duke’s lineage and country of manufacture ('Austria? Australia? Same thing, no?') is a mystery to many people in our country, despite its popularity with enthusiasts. Your parents may, hence, find an orange Duke easier to digest than a yellow Pulsar. However, if they’re the ones funding it, they might find the thirty thou savings a bit hard to resist and your mother will talk you into some high-on-drama religious pact wherein you will be forced to ride the Pulsar at running-in speeds for the rest of your life. ‘Yeah right', you’ll say, ‘and now you won’t even let me marry my girlfriend...'

WHICH ONE TO BUY?

If you’re reading this paragraph before you’ve read the rest of the story, don’t feel guilty – I’ve been as excited as you are to get to this bit. At Rs 87,514 (ex-showroom, Mumbai), the Bajaj Pulsar 200NS is fantastic value. It’s everything the street-racer in you could ever ask for and overall, is a truly outstanding example of honest, enthusiastic packaging. The KTM Duke 200, at Rs 1.17 lakh (ex-showroom, Mumbai) is substantially more expensive and only just as fast as the Pulsar, but for the premium you pay, you get stuff like USD forks, a very communicative trellis frame, a comprehensive meter console, fuel-injection, smashing looks, and quality and feel that is unmatched by even some more expensive motorcycles.

The conclusion, hence, is about whether you have what it takes to make the most of such enthusiastic machinery. Take your call, while I dig into a plate of tandoori chicken...

If your girlfriend is a regular pillion, she’ll hate the Duke for the damage it’ll do to her spine but she’ll like the attention and the extra shopping she’ll get you to do in exchange for not complaining about it. She’ll also like the fact that the Duke doesn’t spray as much muck up the rear (and hence, her latest pair of GasGas denims), thanks to an elaborate (but not ugly) rear mudguard – something that’s absent on the Pulsar. However, considering you’re a stunter, you might not have too many functional bones left, which might hamper your relationship (more on that, er, never). But being a track guy isn’t a big deal either, since women don’t think too highly of men dressed in leather. I’m going to focus on my wheelies...

Not streetfighters, these two, but still popular with thrill-seekers are the Yamaha R15 and the Honda CBR 250R. Both sport full fairings and twin-spar frames, and the single cylinder engines of either feel absolutely at home on the racetrack. The R15, thanks to its riding position, comes across as a bit extreme (it’s a wrist-killer, if you plan to spend longer than a couple of hours in the saddle), but the CBR is the larger, comfier of the two.

Despite its relatively small 150cc mill, the R15’s performance is sharp and thoroughly enjoyable. The CBR’s 250cc motor, too, is very involving and the more you push it, the better it gets. If a full fairing is a must-have for you, try out these Jap track tools.