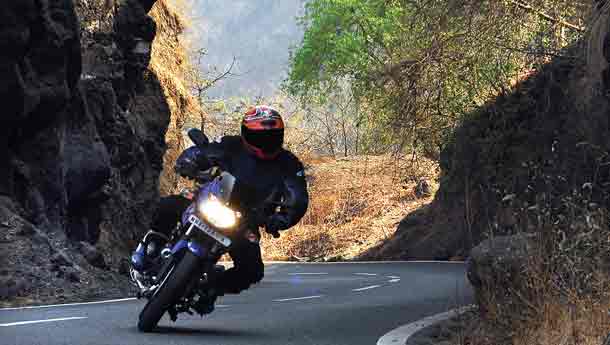 Some days it all falls into place. Unseasonal rain holds off. The weather’s cool – a Bombay rarity. The deserted highway is uncoiling, a freshly laid tarmac snake. And Aman and I are booming along at a steady three-digit clip through all this beauty. Underneath us, the 198.8cc, 18 bhp Pulsar motor is humming away blissfully, its engine note almost drowned in the wind. This is what motorcycling is about. On days like this, all motorcycles are perfect. Or are they?

Before I tell you about how the bike felt, let me just nip through the greasy bits, okay? Mechanically, the Pulsar family is now divided into two subplatforms – 200/220 and 150/180. Mechanically, the 200 motor is almost identical to the 220’s down to the clutch and gearbox (with different gearing). For those who came in late, the other major difference is, of course, the 220’s fuel injection.Visually, the 200 wears the Phantom’s garb with superbly done tank extensions and an all-black lower part (fork legs, rear springs, engine and all). Features wise, all the Pulsars have the same stuff. What has changed is that I now actively dislike the new indicator switch. Push-left-to-cancel-right is too non-intuitive and on the move, it takes up too much attention. I found myself indicating with my hands towards the end of my stint on the 200.

On the road, the bike feels good and sorted. It’s a lot quieter than the 180/150 and feels more powerful than even the 220. It isn’t, of course. The gearbox works flawlessly otherwise, but it hates clutchless upshifts under duress. As a result, both our 0-60 kph and 0-100 kph runs were coloured by at least one messy second-third upshift. Despite, 60 is done and dusted in 4.65 seconds (about 0.4 slower than the 220) and 100 comes up in 16.62 seconds. But frankly, this isn’t the sort of frantic-frenetic Pulsar we’re used to. Somehow, it feels calmer and dare I say it, even gentler in character than the other ones. It doesn’t have that edgy nature, and I for one don’t think it misses it. Booming along two-up down the highway, it felt right. I loved its creamy-smooth 70 to 100 kph poise. It’s a broad, lovely, sweet spot. I can clearly picture taking the better half out for a weekend on this bike. We’d ride briskly without feeling the stress that comes with speed and have a great time.

Aman and I were above 100 kph continuously for almost 60 km and the economy dropped to about 32 kpl. Remember that’s wide-open and two-up. In the real world, 38-42 kpl is where it’s at and the average figure is 39.8 kpl.Sharing most of the chassis with the 200 is a great move too. The motorcycle feels taut and enthusiastic like the 220, but is quicker to turn and more flickable – it’s 5 mm shorter between axles and 5 kg lighter. Lovely. Plus, at near 100 kph speeds, sweepers are a joy you can share with your pillion.

Ride quality is great as usual. The lightfooted, agile ride is very much a part of this package and more than the 220, you feel the weightless grip from the tubeless tyres from this one. The brakes are some of the best I’ve used on an Indian bike and not just because I pulled my first fifty intentional stoppies either. There’s great power, good feel and no grabbiness in the anchors. As you can tell, I really liked the 200. I actually think I enjoyed riding it a bit more than I liked the 220. Which surprises me, but that’s just how it is. On the money front, the 200 is roughly Rs 70,500 on-road Mumbai, which is Rs 7,000-odd more expensive than the 180. In that perspective, I’d recommend raising the budget by that crucial ten percent and opting for this one. It’s also roughly Rs 12,000 cheaper than the 220, which is a lot of dough. If you’re the early adopter type, you have no choice but to get the 220 when it becomes available. I for one have a feeling that if my pocket ever bulged with that kind of dosh, I’d find myself on a 200.