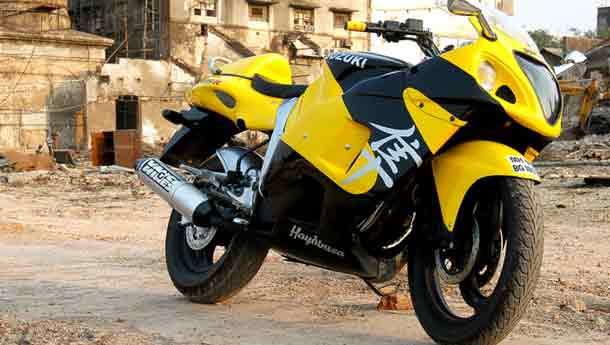 It’s not like he didn’t know, but he’d been tricked. The gentleman had allowed us to shoot the photos on these pages in his premises (thank you) and was not unaware of the bike scene in India and abroad. And yet, there was a full five minute period when he believed the bike in the pic was, in fact, a Suzuki GSX-R1300 Hayabusa, the fastest bike on earth. Oh, you did too?
He said later, ‘The indicators! I should have spotted the CBZ indicators…’


If you live in Mumbai and keep an eye out for in-traffic oddities, you will have spotted one of the few hundred Caliber-Busas, Pulsar-Busas and Anyotherindianbike-Busas that ever so often rip through traffic, trailing a ‘bwaaar’ exhaust note more reminiscent of rust-impaired exhaust pipes than the blazing-quick and yet utterly docile unless provoked Suzuki.

And this ‘Busa’ was very much in the spirit of the story. You see, we called up our contacts in the bike modifying community and one thing was very clear. Current day bikes were proving to be quite reliable. This means most of your involvement with the motorcycle is from the moment the key goes in the hold, you thumb/kick start the thing, get to point B and park it. Two years on, you’re itching for a change, even though your wallet isn’t quite ready to support an all-new key yet.

These guys specialise in fabricating a fibre-reinforced plastic/fibreglass and hand-beaten metal dream around your humble Indian commuter. And as we’re gathering from the bikes this time around, they’re getting very good at this sort of thing.

First the motocrosser. Does that engine block look familiar? It should – that bike was originally a stock Yamaha RX100, one of the most popular performance two-strokes (a relative term, RD350 owners kindly excuse). Umesh Rane, from Mumbai’s suburb of Thane, has been hacking away at it for quite a bit of time. Looks ratty, don’t it? Well it should, it’s already served three years of hard labour at the man’s farm in his village, more than proving that it works.

Umesh and his mechanic friend Vijay Gupta started with the engine, and put in a RX135 block and piston on the original RX100 crank for a bit of a power boost. While the engine itself is un-tweaked, the carb breathes through a custom wet foam filter and has been jetted for power. The exhaust apes a number of Japanese dirt bikes, like the Yamaha DT125, but is Umesh’s own handiwork.

But modding two-strokes for performance is the easy bit. Rane set out to make a full-bore motocrosser, not for jumping man-made obstacles but for a more enduro-style hard-wearing machine for his needs.

Remember, this bike dates before a plethora of disc-ed bikes on the market made the job of hanging a disc on the front easy. The lairy pink carrier on the huge front disc is as impressive to look at as it is incongruous. Sort of like a chequered flag pattern on a diaphanous nightgown. However, purchased off the aftermarket, Rane gas welded a comprehensive bracket for the calliper mount onto the stock fork and found an equally eye-popping pink set of gaiters to keep the disc company up front.At the rear, in the absence of the convenient Honda Unicorn monoshock, Rane took the barrel for a car damper, and fabricated his own rear shock. The inspiration for the bike came from a faded picture of a Gas Gas ‘crosser Rane spotted in an old issue of Track & Field. Using that as a reference, he crafted the web of metal that forms the swingarm (stock tubular Yamaha unit) bracing and on the chassis, he created by judgement and guesswork (but successfully, despite) the top mount for the shock.

On the move, the motorcycle feels like a hardtail on tarmac. Not a good start. However, you have to be gentle with the throttle, for the quick-throttle will quickly build from I’m-stalling to whoa-baby. In the dirt, it feels a lot better, with only the sharp edged bumps flinging the butt clear off the seat.

And three years into its dirt bike avatar, we already know Umesh’s design works very well. We can only suggest he should replace the Caliber Croma headlamp with something even more anonymous and complete the illusion.But while Umesh Rane has been working on modifying machines for a while, apart from keeping a number of Thane RD350s on the road, the Busa is made by a father-son duo who took quite a substantially different route into the business.

Mubarak and his son, Parvesh, are both hardcore mechanics. The former is a famous name in the Mumbai RD350 circle, and as soon Parvesh realised he was more interested in grease than its chemical composition, he became a spanner-wielder as well.Mubarak made his first custom way back in 1987, but returned to his primary business, service and repairs, right after. Until now.

About three months ago, in the post-Dhoom phase, both saw a significant rise in the number of people who were willing to pay to have their one-in-many-millions commuter converted to a special one-off.

This is their first bike. At BSM , we’ve seen more than a few Indo-Busas. However, this is easily the best yet. And not just in terms of attention to detail and finish levels.

The donor bike is another Indian performance milestone, the (first) Bajaj Pulsar 180, which was painstakingly morphed into this hulking beast. Parvesh and Mubarak started with the chassis, the clear intention being to ape the Busa’s monoshock. The Honda Unicorn, cheap at Rs 1,200 (earlier you had to get a Yamaha TZ250 shock for anything from Rs 5-7,000) was brought in. However, as soon as it became clear that additional length and strength would be needed, the Unicorn’s swingarm was added in as well. The stock bottom mount and the length of the swingarm proved, in hindsight, good decisions.The top mount was also fashioned in-house. When asked how the top mount’s strength requirements were calculated, Mubarak smiles, ‘It’s based on a estimate, and that estimate is based on my thirty plus years working on motorcycles.’

Not perfect, but fair enough. While the basic engine wasn’t touched, Parvesh crafted the new exhaust which uses the end can from a Kinetic GF 170 with the insides all scooped out for the noise. Mubarak wanted a rear disc, which proved to a complicated effort. An Enticer disc unit was modified to mount on the drum brake’s shell with a complicated and frankly too gnarly mounting for the calliper. In the absence of a better place to hide the master cylinder, it got bolted for the moment to the subframe straight. With the basic chassis sorted, the duo began on copying the complicated aerodynamic brightwork of the Busa.

Since this was the first motorcycle, a lot of the fairing is in mild steel, which will be replaced with FRP in the next set of Pulsar-Busas. The tank, complete with curves and recesses, was slowly brought into shape with the fairing sides sculped more or less into the Busa’s distinctive shape. We asked Parvesh why he picked the Busa as the bike to mimic. ‘Because it is the fastest... well, actually, the film Dhoom did a lot for the popularity of the machine here. After watching John Abraham on-screen, lots of people wanted to have it.’

To complete the bike, Mubarak needed a fat gumball tyre to complete the look. Once it became clear that a 150-section tyre would do the business, the owner began to insist that the tyre be a 170-wide unit, at the very least.

This led to one of the bike’s potentially serious flaws. The swingarm had to be ‘widened’ to accommodate the much, much wider rubber. In the process, it got a bit skewed, and if you look carefully, you will see that the rear tyre is almost entirely visible beside the front hoop even when the bike is seen head-on. Er…oops.

But once the various lights – Bajaj Bravo indicators, Enticer beam for the top reflector etc – were sorted, Mubarak and Parvesh replicated the paint scheme, stickers and did a fine enough job to fool most people into believing that the huge physical bulk of the motorcycle was not, in fact, a Pulsar, but something a lot more potent.

On the move, it feels very, very tall. Which is at odds with the easy low-slung feel of the Busa. The culprits are the stock suspension and the eighteen-inch wheels, which combine with the fat rubber, abundant bodywork and tall seat. Riding the bike feels not unlike steering a wheeled ladder from the top rung. However, some of it was also the 30 extra kilos the bike has put on from stock.

One surprise was that the duo chose fat, square metal plates to fashion a very crude set of rearsets. This and hiding the rear disc’s master cylinder are on the immediate mod list. The plates weight a hefty 15 kg together, substantial in a 130 kg motorcycle. After our first meeting, Mubarak and Parvesh had already thinned the plate a little, but the next step is to either replace the mild steel plates with aluminium, or craft a proper rearset.

However, these are minor niggles, and the big worry, surprise, is intellectual property rights. Okay, perhaps the phrase is too big in this context, but the Busa duo are worried that if they were to sell the fairing as a kit, other modifiers would instantly make copies of their hardwork and you’d be awash in copies of Hayabusa Pulsars.

But Mubarak’s return to custom bike building, and Rane’s increasingly busy workshop, point to one clear trend. Indian motorcycle enthusiasts, up and down the product chain are willing to spend as much 70 per cent of the showroom price of their machine to make it stand out of the crowd. And where there is money, a market will appear on its own.