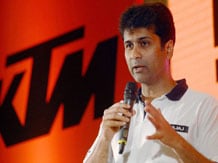 The six-speed transmission-enabled bike weighs 145 kg and has a fuel tank capacity of 10.2 litres.  At 373.2cc, the 390 Duke would be the first midsize sports bike in the country. It will be sold and serviced exclusively through 71 KTM showrooms and service centres, which are managed by Bajaj Auto.

Amit Nandi, vice-president, Bajaj Probiking said, “With its powerful engine, light weight and easy handling, the 390 Duke will be equally rewarding for both, the professional rider as well as the enthusiast. KTM is a sharply differentiated brand, which, in a short span of time, has become the largest selling premium motorcycle brand in India. This position would be further strengthened with the launch of the 390 Duke.”

Bookings for the Duke 390 would commence from June 26. Bajaj Auto, however, clarified the price is an introductory price. Bajaj has promised to launch a Pulsar on the Duke 390 platform later in the year. It would be the most powerful Pulsar yet from the company.