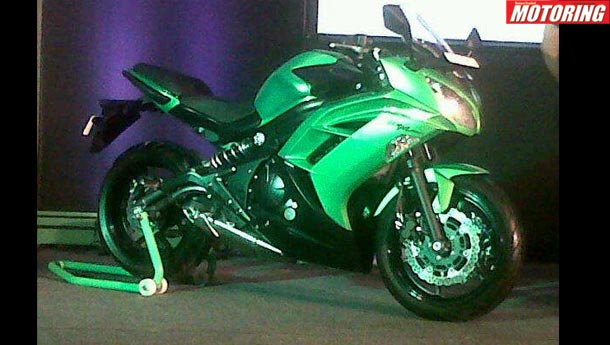 Bajaj Auto and Kawasaki launched its pro biking offering Ninja 650 in Pune on Thursday which is priced at Rs 5 lakh, ex-showroom Delhi.

After the Kawasaki Ninja 250R and the KTM 200 Duke, the new 2012 Kawasaki Ninja 650 is the third premium sports motorcycle model introduced in India by Bajaj Auto Limited. Bajaj Auto has sold over 3000 Ninja bikes since its launch in the year 2009.

Commenting on this, Amit Nandi, vice president, Probiking, Bajaj Auto Ltd said, “ The superbike market is rapidly growing in India and over 6500 get sold in India every month. In KTM and Kawasaki we offer two of the sportiest motorcycle brands in the world through a sales and after-sales network that has been specially created to cater to the specific needs of motorcycle enthusiasts. With the Kawasaki Ninja 250R and 650 we created a category of ‘practical superbikes’ and as a result enjoy a dominant market share of more than 60 per cent in that category.”

He added, “KTM and Kawasaki are our global business partners and along with them we aim to build on our already dominant position in the sports motorcycle segment in India with the Pulsar. There are a number of initiatives in the pipeline on all these three brands that would be introduced over the next 18 months.”

New Ninja 650 has a 649cc engine that puts out 71.07 bhp of power. It comes with an adjustable windshield, revised suspension and a split seat.

The other cosmetic changes include new dual headlamps and doesn't come with ABS. The motorcycle will be available for sale at ProBiking dealerships in 60 cities.

The Ninja 650 will compete with Duke 200 and Korean Hyosung 650 N in superbike segment.