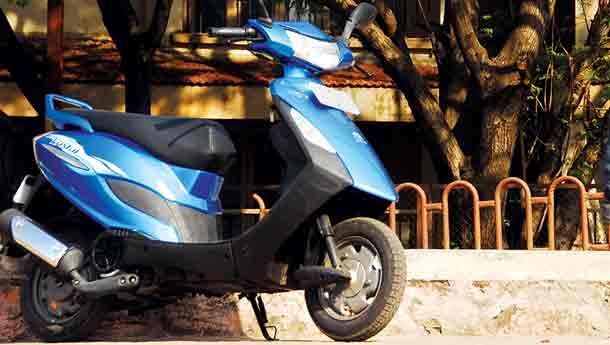 Not fair. Aman Chaudhry was supposed to be filing this riding impression, under my careful supervision. You can already see how that worked out. Just so you know, a day after we completed riding and photographing the edgy-wedgy new Bajaj Kristal, her ladyship upped and left for a paid holiday, also known as the Mahindra Great Escape. You’ll see a photo-story next issue, I think.Anyway, it fell to me to file a riding impression on this scooter that smartly nuzzles into the gap between the excellent 88cc Scooty Pep+ and the effortlessly great 102cc Honda Activa/Dio/HH Pleasure. And it does so in more ways than just engine displacement, which, by the way, is 94.87cc, with Bajaj’s twin spark plug format incorporated.

The most obvious way in which it does the meat-in-the-sandwich act is the ergonomics. It’s a small scooter, without question, but unlike the Pep+, under whose handlebar I wedged my knees repeatedly, there is space. Hell, I think I could take Joshua out for a spin, and neither of us would really be short of space.

On the other hand, the Activa (and siblings) are definitely larger. Those scooters are not only physically larger, they have fatter tyres, more space etc. And get this, the Kristal still manages a significantly larger underseat storage space with smart product design. In this case, the fuel tank has been located under the footwell, which has the three-fold benefit of freeing up underseat space (no, a full-face helmet still won’t fit right side up), moving the fuel filler to the inner front panel (far more convenient location than under the seat) and improving the dynamics by locating a relatively heavy (and variable) component in the centre of and down low in a light two-wheeler.And that’s just what it is, a light scooter. It wears tiny looking wheels (actually, they’re also 10-inchers like the Activa, but wear 3.00 inch rubber), is diminutive in stature and feels like it too. Heading into a corner and applying muscle will have you making near U-turns. Just think about the line you want, that’s the amount of effort you need. The Pep+ is similar, but the Kristal felt a whole lot sharper than what I remember the TVS bike as being.

As I said, the tyres are thin, but they’re far from ineffective. I was impressed by their tenacious grip. I do have an idea, though. Since the Kristal looks edgy-wedgy from all angles, I’m a bit surprised that the older-than-me MRF scooter tyre tread pattern got into this mix. I’d have thought a more modern looking tread design on the same compound would have done a similar job and looked even sharper. The same goes for the leading link twin shock (telescopes please) and the painted pressed steel wheels (alloys please).

Ride quality, in a nutshell, isn’t Wave great. The Wave was very cosseting and I wasn’t expecting this much feedback from the Kristal. It isn’t shatteringly harsh or anything but it isn’t a step up from the effective Wave. I do think the greater wheel travel afforded by telescopes (not to mention harder braking) would have helped the package, because the rear end of the bike feels more plush than the front on almost all surfaces.

The Kristal’s steel wheels wear 110 mm drums at either end and they’re good. Squeeze them hard and the Kristal sheds speed without fuss or bluster. However, as I’ve said for many leading link front-ended scooters, use the front brake carefully. Beyond a point, it will lock the front wheel no matter how hard you try to avoid it.

As is becoming the new trend with Bajaj products, the feature list is both impressive and long – and carefully thought out. Once you read it, you’ll see that the Kristal faithfully erases almost all the niggles that go with scooter ownership and adds a few bonus features too. So for a quick, staccato list, the Kristal has an ambient light sensor that will switch on the headlamp automatically when you cover the right side of the instrument console, or when you pass through a tunnel, underpass etc. It has a throttle lock in addition to the handlebar lock for extra theft protection. It also has a single keyhole which will flip open the smart fuel filler cap, the seat plus ignition, park and lock functions. It has illumination under the seat and a full audio backtrack that includes warnings for side stand, seat locked, seat unlocked and hairstyle too weird. Okay, nix that last one. On the mechanical features side, the ignition is ‘smart’ – it decides choke, duration of cranking etc once you depress the rather jazzy start button and finally, a scooter-borne oil level window to see if there’s enough of the slimy stuff still inside.All of this is packaged is a neat looking form that is quite attractive and at least I thought it was quite unisex. In hindsight, the shots of me riding the Kristal look a lot more ‘normal’ than the shots of me riding the Pleasure, for instance.

And now to the business. What’s it like? It’s rather nice. The force-aircooled oversquare four-stroke single may only displace 94.8cc, but it manages to produce 7.3 bhp, which actually is more than the Activa’s figure. It also happens to be about 25 kg lighter. While the Kristal certainly will not beat the Honda trio on top speed, we will put together a little shindig to figure out which one gets to 40 kph and 60 kph sooner. Oh and by the way, Bajaj claims 50+ kpl in city riding.At the end of the day, it’s a nice scooter proposition in many ways. Bajaj has been very smart about the packaging and feature spec for the scooter and I like the fact that all of it works. Priced competitively at Rs 34,760 ex-showroom Pune, I can’t see any reason why the little thing should not be a popular member of the already quite busy showroom.

I knew from the beginning of this story that the rather lost looking Kristal from Auto Expo 2006 would have to be pretty impressive in the flesh to re-ignite Bajaj’s return to its original forte, scooters. And from whatever I can see, they’ve managed to get it right.