Japanese automobile major Kawasaki and Bajaj Auto have decided to end their eight-year-old alliance for sales and services. Bajaj Auto said this would allow it to focus on its superbike brand, built in association with Austrian company KTM.


“It is a mutually arrived at, amicable decision. On our part, the reason is to focus on KTM,” said Amit Nandi, president, Probiking, Bajaj Auto. Kawasaki executives could not be reached for comment.


The alliance will end on April 1. However, Bajaj and Kawasaki will continue with their relationship in the rest of the world.


“The decision is based on merits in each country. In India, there is not much merit in staying associated,” Nandi said.


From April, Kawasaki will take care of its sales and after-sales service through India Kawasaki Motors, a 100 per cent subsidiary of Kawasaki Heavy Industries, set up in July 2010. Kawasaki has its own assembly plant in the country.


So far, Kawasaki had access to 300-plus Probiking and KTM showrooms of Bajaj Auto. Nandi said the capacity in its network freed up by Kawasaki and the addition of over 100 showrooms in 2017-18 would strengthen the KTM business.


The Bajaj-Kawasaki relationship goes back over four decades to the 99.2-cc Bajaj Kawasaki Boxer, an entry level bike. Bajaj had forged a technology tie-up with Kawasaki in 1984.


By the turn of the century, Bajaj began to become self-reliant in technology. The last motorcycle it built with Kawasaki's technology was the Eliminator in 1999. 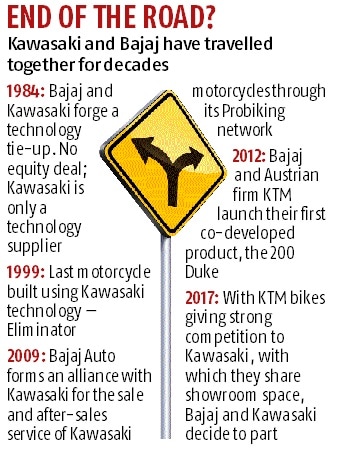 Later, Bajaj got Austria’s KTM, in which it holds a 48 per cent stake. Both the KTM and Kawasaki brands were sold through Bajaj’s Probiking network.


Nandi said a company of Bajaj Auto’s size would have multiple brands with varying degrees of profitability. KTM’s strategic role is to be the benchmark for sports motorcycles in India. KTM bike sales have been growing at a 48 per cent compounded annual rate to 37,000 in 2016-17.


Bajaj Auto International Holdings BV, a subsidiary of Bajaj Auto based in the Netherlands, has invested Rs 1,219 crore in Austrian firm KTM.


The Bajaj-KTM partnership launched their first co-developed product, the 200 Duke, in 2012. Bajaj manufactures the KTM 200 Duke at its Chakan plant and these are sold through the Probiking network in India, apart from being exported.


Bajaj offers Duke and RC models in five SKUs through the over 300 KTM dealerships in India.