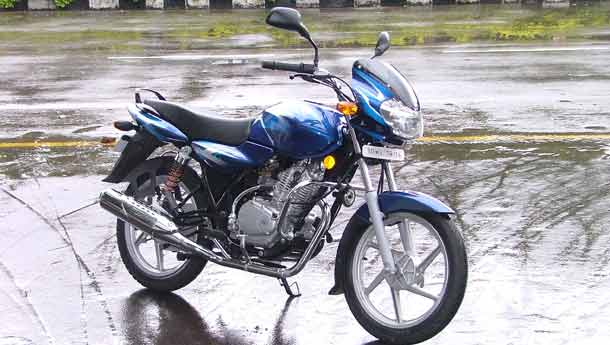 The nice thing about entering the arena a bit late is that you already know the score. However, it doesn’t matter one teensy-weensy bit when you aren’t planning to play the game, and your intention, in fact, is to up it.


Which is the first impression I made from my time at the Chakan test track with the new Bajaj Discover. Clearly, benchmarks and comparisons were not part of the genesis of this machine. The internal designation, K60, did come from a benchmark of sorts, though. The bike was supposed to return 60 kpl in everyday traffic. In retrospect, Bajaj’s R&D chief, Joseph says he could’ve called it K70, even K80.

But the central idea was something different. The design team wanted to excise compromise from the commuter blueprint. And trust me, you’ll hear a lot of that word in their advertisements. So, the plan was to create a commuter that would do it all and then some. Which, as you can see sounds like the plan for every other commuter, doesn’t it?

But from the moment you set eyes on the Disco, you just know that the average it isn’t. The styling, done in-house, is sleek, lithe and attractive. Joseph says it was modelled on Sudden, the super-quick gunslinger from the Western novels. While it isn’t too flashy or too radical, it isn’t anonymous, and you’re unlikely to have to search a crowded parking lot for your machine.

There will be three Discover variants. The bottom end sports a massive glass beam round headlamp. The use of glass looks like an anachronism, but Bajaj says market surveys indicate people don’t really perceive the clear-plastic type of round lamps as great value. The other two sport a nice fairing, with a rounded, wide lamp topped by two pilot lamps. The look is mean, focused and purposeful. Sort of like the bike wants to get to office with a vengeance.

The rest of the bike is equally muscular without getting bulky. The black-painted, but thick tubular frame is a subdued but powerful part of the look and the sleek body panels only serve to touch up the look. The tail lamp formed also to act as the top lip of the tail piece is just a marvellous detail, a detail I’d personally like to see on the Pulsar as well.

Nestling in the middle of that frame is a wide-finned, strong looking motor. The 124.52cc engine is cast in the same two-valve, two-plug, short-stroke mould, but is new from the ground up. Early in the design, the Pulsar-style counterbalancer was axed and the R&D team put lots of engine components on serious Atkins diets. The result is that inertial vibes are tremendously low. Factor in the low friction elements, you know – the rocker-roller thingys and stuff – and you have an efficient little motor. It turned out to be so slick that apart from the mounting point front and centre, the K60 has a solidly mounted engine and still doesn’t have any ticklish vibes through pegs, bars, seat or tank.

Inside the engine, light valves, thin piston pin, slim con rod and heavy crank combine with a slick, widely-spaced four-speed gearbox. The jewel in the Discover’s crown is going to be exhausTEC. Bajaj is patenting the resonator-like box (shape and size roughly like a small packet of potato chips) which joins the exhaust pipe as it passes the foldable footpegs under the engine. This little box creates roughly the same effect as a two-stroke expansion chamber. And allows Bajaj to reap huge benefits in terms of torque – always a precious commodity on short-stroke rev-head engines.

Bajaj claims 1.1 kgm peak torque for the Discover. Which is best in class, but when you see that the torque curve stays well above 1 kgm all the way from 3500 rpm to 6500 rpm, you begin to see the enormity of the spread. They’ve created a tiny torque monster! Get this, the Victor 125 and the Wind don’t even make 1 kgm at their peak torque revs.

And that isn’t all. The 11.5 bhp peak power is also ahead of the rest and if they’re to be believed, the Discover slices past 60 kph in under 6.5 seconds from a standing start, which is 1.5 seconds quicker than the Fazer. And its 110+ kph top speed is the class’ best as well.

A performance commuter then? Yes, and the Discover is quite flexible in traffic too. Riding on the test track, Joshua slowed next to me. When we both took off, I noticed him downshifting into second while I just rolled on the throttle in third gear. We made roughly the same progress to the next corner, which speaks highly for the width and depth of the powerband. Later, I tackled one of the corners in three different gears and found that it doesn’t really affect my cornering speed by much.

And the fun had only started. Like the engine, the chassis too is very good. Using thin-wall, high-diameter tubes, Bajaj have created a light, but rigid, new chassis. Then they gave the bike more travel, 135 mm up front and 110 mm at the rear and slung on 17-inch wheels shod with Dunlop Zebra-Y rubber. The high-end variant gets the Pulsar’s nice 240 mm disc, while the other two get 130 mm drums.

So when the corner approaches, two fingers on the brakes – as we found out, even the freakin’ drums work well – will effortlessly set up corner speed. The rest happens at the speed of thought and requires exactly that much effort. Lower gyroscopic interia and lower unsprung loads make cornering the Discover a lovely experience, bolstered by good tyres and compliant and firm suspension. The long 1,305 mm wheelbase aids stability and is balanced very well with the low centre of gravity and low-effort steering. This bike is just begging for a race track and clip-ons. Whoda thunk you’d say that ‘bout a commuter?

The exciting track manners do not, however, compromise bad-road etiquette. Bajaj has attacked stiction (the friction the forks have to overcome before they can react to a bump on the road) with Teflon-coated bushes. As a result, the suspension feels very supple and does an outstanding job of keeping the wheels in touch with the ground without shaking the rider like King Kong in a rage. When Joshua, Pablo and I left the test track and found a village road with bumpy tarmac, potholes and gravel, the Disco just danced through. Even when rain came down, none of us felt the need to back off and check our speed.

At the end of a full day spent riding, I have to say that Bajaj has re-entered the 125cc fray intending to do a full-tilt boogie. While Bajaj officials won’t talk prices at the moment, the tags should be in the ballpark. If they do a Pulsar and make it even cheaper that’d be brilliant. Even if it were a bit more expensive, I cannot see anything that will stand in the way of this bike. After three days of analysis, the only flaw I can think up is that when you’re riding normally, sitting upright, the bike can feel a bit slim, as opposed to the big bike feel that the Yamaha Fazer has.

As is obvious, I already think the world of the bike. Bijoy cautioned my optimism about the Discover, ‘It is a new bike, and one must be careful. One still has to see what it will be like when it has a few thou showing on the odo.’ And with that I agree. The Discover has yet to enter our road test arena and prove its abilities, but one thing is certain. If I were in the market for a new commuter (and not just a 125cc commuter, mind), I’d wait till Motoring prints its test report.